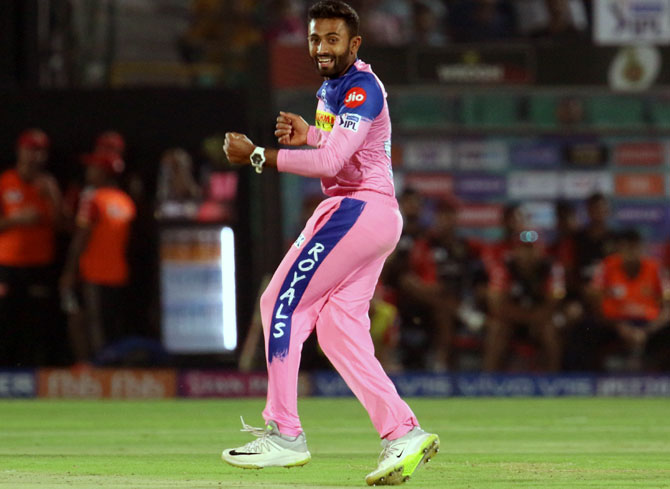 Having started the IPL with three straight losses, Rajasthan Royals need something special to get their campaign underway.

And that magical touch was provided by leg-spinner Shreyas Gopal who ripped through the Royal Challengers Bangalore top order, to help Rajasthan claim a 7 wicket victory for their first win in IPL-12, in Jaipur, on Tuesday, April 2.

Virat Kohli looked keen to play a big innings as he started off cautiously, but all his plans were undone by Gopal who accounted for the RCB captain in his very first over.

Virat -- playing his 100th game as RCB skipper -- had a close shave when he failed to read Gopal's googly and survived a close shout for leg before, with the inside edge coming to his rescue.

The young leggie bagged Kohli's big wicket with his next delivery, another cracking googly. Kohli went for the cover drive, was beaten all ends up and bowled through the gate.

In his next over, Gopal ndealt RCB another body blow, dismissing the dangerous A B de Villiers. Another googly accounted for the South African as the ball held onto the pitch. AB ended up chipping a simple catch back to the bowler.

Shimron Hetmyer's nightmarish IPL continued as struggled against the spinners before Gopal ended his misery, having him caught behind after he edged a googly.

Gopal's first spell of 3/8 in three overs, including a maiden, saw RCB slip to 74/3 after 11 overs and they struggled to get going after that.

Though Parthiv Patel came to the rescue with a quickfire 67 from 41 balls, RCB finished on a below-par 158/4, which hardly challenged Rajasthan Royals. 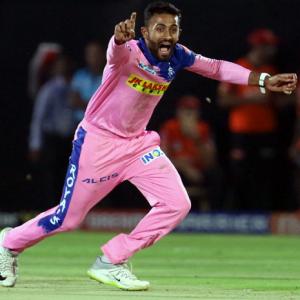