England on verge of series victory against WI

England were on the verge of clinching the three-match series against West Indies after the tourists' top order failed again on the third day of the second Test at Trent Bridge in Nottingham, on Sunday.

Trailing by 58 on first innings, West Indies limped to 61 for six, a lead of just three runs with two days left.

England captain Andrew Strauss with 141 and a useful partnership of 53 by all-rounders Tim Bresnan (39 not out) and Stuart Broad (25) had lifted England past the West Indies first- innings total of 370.

Although the final score of 428 was much less than seemed likely at the close on Saturday with Strauss and Kevin Pietersen at the crease on 259 for two it proved too stiff a challenge for the touring side missing the experienced Chris Gayle at the top of the order.

James Anderson struck early to dismiss openers Adrian Barath (7) and Kieran Powell (1) before Broad captured the prized wicket of Shivnarine Chanderpaul for 11, top-edging a pull and caught on the boundary by Jonathan Trott.

Bresnan trapped Darren Bravo (22), Denesh Ramdin (6) and Kirk Edwards second ball for nought, all out lbw, to leave the tourists in disarray.

Marlon Samuels and Darren Sammy, who both scored centuries in the first innings, were the not out batsmen at the close.

Bresnan ended with figures of three for 10 in six overs, cementing his talisman status for England as he has won all 12 Test matches he has played.

He told BBC Radio: "To get them six down on that wicket in that short little session was fantastic."

Bresnan's valuable unbeaten contribution with the bat lasted 153 minutes in a critical period of the game.

"It was kind of a battling knock," he said "It just shows what the pitch was like really. It was quite slow, quite difficult to score off, especially when they bowled in the right areas."

Bresnan and Broad came together at 363 for seven and comfortably steered England past West Indies' total of 370 only for Broad to top-edge a catch off the bowling of Shane Shillingford.

Graeme Swann (1) and Anderson (0) swiftly followed to wrap up the innings.

Strauss's steadfast knock, lasting 303 balls and seven hours and 12 minutes, contained 22 fours before he finally offered a catch behind off the bowling of captain Sammy.

West Indies had taken four important wickets before lunch to the disappointment of home supporters expecting a run feast.

Pietersen (80) and Ian Bell (22) fell to reviewed lbw decisions and Jonny Bairstow (4) was given a torrid time in only his second Test by pace duo Kemar Roach and Ravi Rampaul before top edging an easy catch to mid-on.

Just when it looked as if England were steadying the ship Sammy bowled Matt Prior for 16.

Rampaul, who captured the vital wicket of Pietersen, was the pick of the West Indies bowling with three for 75 off 25 overs. Samuels, top scorer in the West Indies first innings with 117, mopped up the tail with two for 14.

England lead the series 1-0 after a five-wicket victory in the first Test at Lord's. The final match starts at Edgbaston in Birmingham on June 7.

© Copyright 2021 Reuters Limited. All rights reserved. Republication or redistribution of Reuters content, including by framing or similar means, is expressly prohibited without the prior written consent of Reuters. Reuters shall not be liable for any errors or delays in the content, or for any actions taken in reliance thereon.
Related News: Stuart Broad, England, Tim Bresnan, Darren Sammy, Andrew Strauss
COMMENT
Print this article
Trent Bridge Test: Samuels and Sammy revive West Indies
England name unchanged squad for second Test 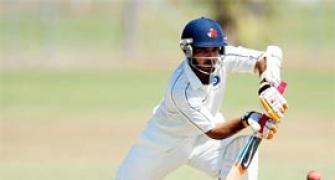 No net bowlers for India A camp at Kotla 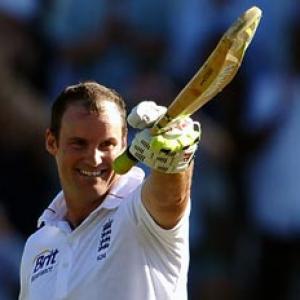