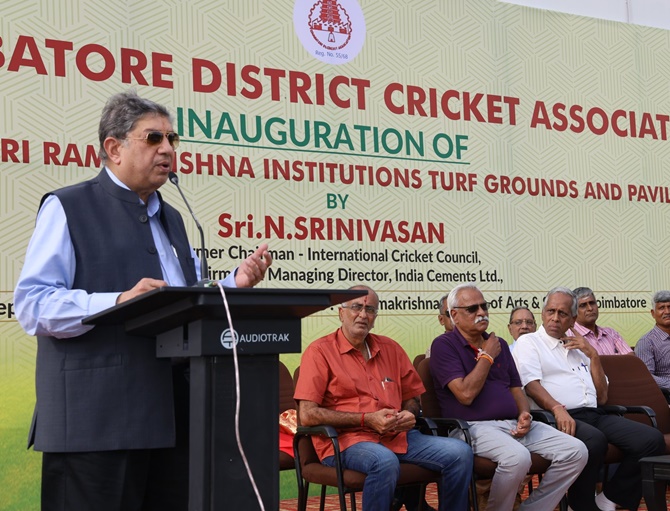 IMAGE: It is highly unlikely that Srinivasan's daughter will face any opposition. Photograph: TNCA/Twitter

Former Board of Control for Cricket in India president Narayanaswami Srinivasan will maintain his stronghold over Tamil Nadu Cricket Association (TNCA) with his daughter Rupa Gurunath all set to become the first woman president of a BCCI affiliated unit during its AGM on September 26.

It is highly unlikely that Srinivasan's daughter will face any opposition with the last date for filing nomination being September 24.

A decision to this effect was taken during TNCA's executive committee meeting held here on Sunday, sources said.

With Rupa taking over the reins, TNCA will remain under control of the Srinivasan family, as it has been the case for the better part of the last two decades.

It must be mentioned that Rupa's husband Guruanth Meiyappan, the tainted former Team Principal of the Chennai Super Kings has been banned for life by the BCCI, for being involved in betting during the 2013 IPL which was rocked by spot-fixing scandal. Meiyappan was in fact arrested by the Mumbai Police in midst of IPL.

On Saturday, the Shah family of Rajkot maintained their control over Saurashtra Cricket Association with former BCCI secretary Niranjan Shah's son Jaydev took over as the president. Jaydev retired after 16 years of first-class cricket, the better part of which he captained India players like Cheteshwar Pujara, Ravindra Jadeja and Jaydev Unadkat.

The need to complete the TNCA elections before September 28 deadline as per the upreme Court directive forced the association to quicken proceedings.

The Supreme Court on Friday allowed the TNCA to hold elections to elect office-bearers but said the results will be subject to its decision.

The Committee of Administrators had set October 22 as the date for the BCCI AGM and elections and set September 28 as the deadline for the state units to conduct their elections.

Source: PTI© Copyright 2020 PTI. All rights reserved. Republication or redistribution of PTI content, including by framing or similar means, is expressly prohibited without the prior written consent.
Related News: TNCA, Narayanaswami Srinivasan, Rupa Gurunath, BCCI, Former Board of Control for Cricket in India
SHARE THIS STORYCOMMENT
Print this article