'I hope to run my best in Doha, that is my target' 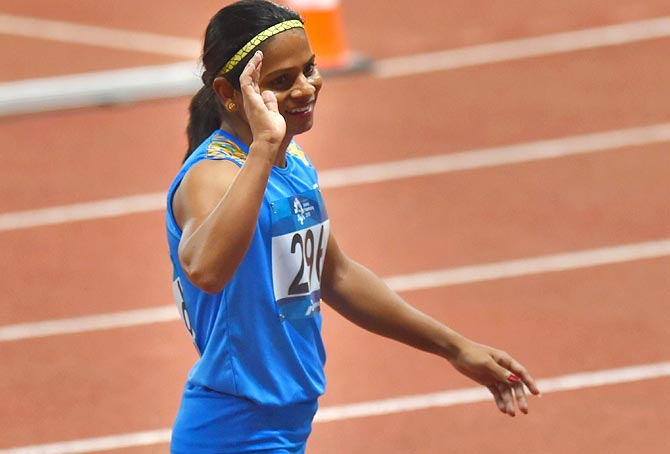 IMAGE: Dutee said she is determined to make amends of her disappointing performance in the last edition of the event in 2017 London. Photograph: Shahbaz Khan/PTI

India's fastest woman Dutee Chand has set herself a target of reaching the finals of the women's 100m dash in the World Championships starting in Doha on September 27 with a personal best timing.

Dutee, who these days has been training at night similar to her competition schedule in Doha, said she is determined to make amends of her disappointing performance in the last edition of the event in 2017 London.

"I hope to run my best in Doha, that is my target. I could not reach the semifinals last time but I am hoping to reach the finals this time. It will not be easy but I will be really happy if I do that," Dutee said.

In the 2017 London World Championships, Dutee ran a disappointing 12.07 second in the heats and failed to reach the semifinals.

Dutee could not touch the Doha World Championships qualification mark of 11.24 seconds but her personal best effort of 11.26 seconds, which is also the national record, during the Asian Championships in Doha in April, ensured that she was among the maximum target number of competitors for the event.

"I am training at night these days around 7pm to 8pm to adjust to my race timings in Doha and my preparations are going well. Let us see what happens in Doha," said the 23-year-old Odisha athlete, who became the first top Indian athlete to have confessed to same sex relationship.

Dutee, who became the first Indian to win a 100m gold in a global event during the World University Games in July, has been training with her coach N Ramesh at the Kalinga Stadium in Bhubaneswar.

She, however, is not hoping to qualify for the Tokyo Olympics from the World Championships -- for which the qualification standard is a tough 11.15 seconds.

"It is the end of the season and I have run a lot of races this year. So, I have to see how far I can push my body to run faster. It will be difficult to run that mark (11.15). It is not only for me but for other athletes also," Dutee said.

"I am not running any more competitive race and I have to try next year for Olympics qualification," said Dutee, who has run 15 competitive races this season (3 Indian Prix, 3 in Fed Cup, 3 in National Inter-State, 3 in World Universiade and 3 in Asian Championships).

The biennial World Championships are normally held not later than August but in view of the heat in Doha, the showpiece event is being pushed to September end to early October. The late season fixture and the heat, which will be still high, may impact the timings of the athletes.

Under normal circumstances, athletics season ends in September and top athletesall over the world have tweaked their training and competition schedule to able to peak during the World Championships in Doha.

Dutee, who is leaving for Doha on September 25, said her coach N Ramesh will accompany her and she will bear all his expenses as he is not a member of the official Indian contingent.

"All the expenses for accommodation and flight will be borne by me. I have requested the AFI to arrange for a pass for him to be able to be at the stadium when I run my race. The AFI has said yes," she said.

She also rued that she could not travel to Europe to run a couple of races in the first half of last month due to visa issues and later because of some technical problems. 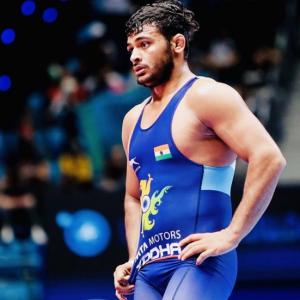