Stats: At 26, Kohli youngest Indian captain to win an away series

Ishant Sharma has taken 65 Tests to bag 200 wickets, the most by an Indian bowler!

Rajneesh Gupta has some interesting numbers from Day 5 in the third Test. 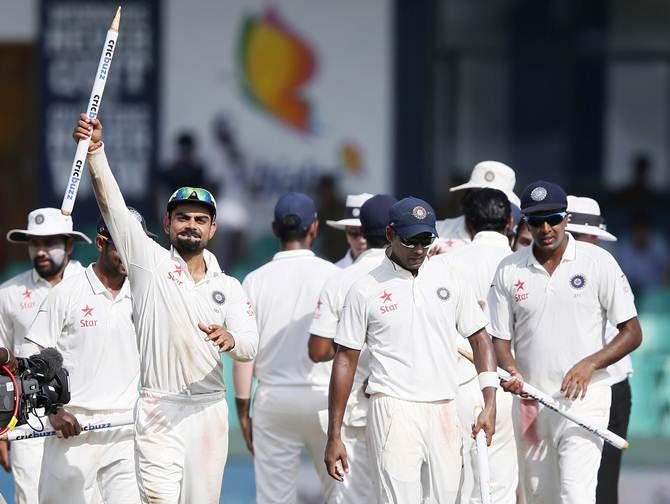 IMAGE: Captain Virat Kohli, left, hoists a stump as he celebrates with his teammates Stuart Binny, centre, and Ravichandran Ashwin, right, after India defeated Sri Lanka in the third Test to win the series 2-1, in Colombo, on Tuesday. Photograph: Dinuka Liyanawatte/Reuters

India defeated Sri Lanka by 117 runs in the third and final Test to win the three-match series 2-1 in Colombo on Tuesday.

After setting Sri Lanka a 386-run victory target in the bowler-dominated weather-hit contest, India needed seven wickets on the final day to gift Virat Kohli his first series victory since becoming the Test team's captain last year, but got them only after Sri Lanka skipper Mathews (110) and debutant Kusal Perera (70) were out after putting up stiff resistance.

Off-spinner Ravichandran Ashwin, who was later named Man of the Series for his tally of 21 wickets from the three matches, was the pick of the Indian bowlers, claiming four wickets for 69 runs, while pacer Ishant Sharma scalped three for 32 and Umesh Yadav two for 65.

Number of Indian captains to win an away series after losing the first Test before Virat Kohli. Even at home, only two – Ajit Wadekar & Sourav Ganguly - accomplished this feat.
3

Number of Tests after which Sri Lanka lost at the SSC. Their last defeat at the venue was against Australia in 2004. Since then Sri Lanka won seven and drew seven before finally losing one.
16

Number of series wins for India, outside India. The list includes four in Bangladesh, three in England and West Indies each, two in New Zealand and Sri Lanka each and one in Pakistan & Zimbabwe each.
22

Number of years after which India won a series in Sri Lanka. Their only other series win was in 1993 under Mohammad Azharuddin (1-0).
26

Years, 300 days: Virat Kohli’s age. He becomes the youngest Indian captain to win an away series. Tiger Pataudi was 27 years, 67 days old when he led India to a series win over New Zealand in New Zealand in 1968.
65

Number of Tests taken by Ishant Sharma to bag 200 wickets – most by any Indian bowler. However, the last 51 of those have come in just 11 Tests for Ishant.
Rajneesh Gupta
COMMENT
Print this article