- 'There should be no interference at all with the pitch during a day's play. There’s so much sweeping and grooming going on these days, it’s like we’re in a barbershop.'

- 'It’s hard to believe the number of decisions that are decided by a cat’s whisker. A millimetre here or there and, suddenly, if you get it wrong, you lose a review. That’s ludicrous.' 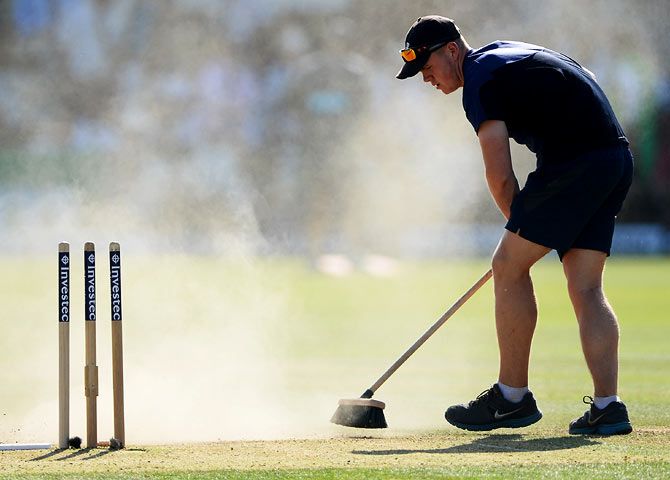 A groundsman sweeps the pitch during the second Ashes Test between England and Australia at Lord's Cricket Ground on July 19, 2013. Photograph: Mike Hewitt/Getty Images

Shane Warne, the second highest wicket-taker in Tests, wants the longer format of the game to be played over four days, not five.

Australia’s spin great, who took 708 wickets in 145 Tests, says play can start early each day and 20 minutes added to each of the three sessions.

“The number of overs to be bowled in day in a Test match has always been an issue. Let’s fix it, once and for all.

“To start with, let’s play Test matches over four days, not five. A big call? Maybe – but not if ninety-six overs are bowled in each day’s play.

“This could be achieved by extending the playing hours from 11am to 6pm, to 10am to 6pm and making lunch and tea breaks 30 minutes.

“The sessions would then be extended to 2 hours and 20 minutes. With the constant access to drinks and treatment during these play days, the extra time wouldn’t be a problem, as teams would always bowl their overs in time and TV stations can schedule everything,” Warne wrote in his column on his official website (shanewarne.com).

He also wants the ground staff to refrain from sweeping the dust off the pitch at regular intervals during a day’s play.

“There should be no interference at all with the pitch during a day's play. There’s so much sweeping and grooming going on these days, it’s like we’re in a barbershop. Leave it be. The groundsmen can touch it each morning and that’s it, nothing through the day.”

Warne also warned the administrators against the overkill of T20 cricket despite its popularity and playing bilateral T20 matches between two nations.

“There’s no doubt about their popularity, but they should only be played domestically, except for a T20 World Cup every two years.

“This then would not affect the IPL, Big Bash or any other 20/20 comp and is sort of like an Olympics.

“The good players will adapt very quickly to international competition, and most of them step out in the domestic T20s in any case,” he said.

He also believes that the Duckworth-Lewis system used to calculate targets in rain-hit limited overs matches needs a rework.

“The Duckworth Lewis system needs to be revisited. The system is just not fair and accurate any longer, particularly in T20 matches.” 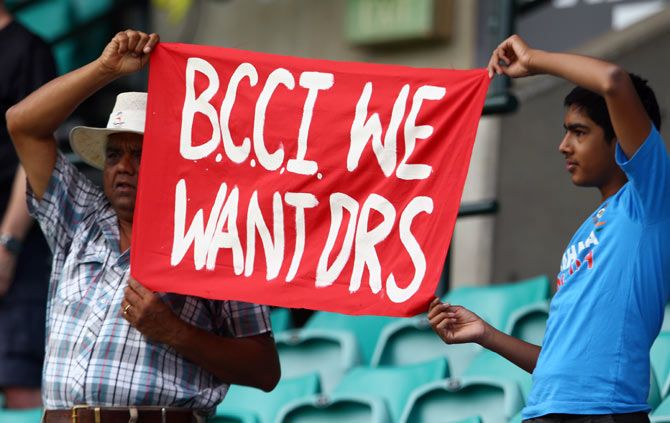 Indian supporters in the crowd hold up a sign about the DRS during the fourth Test between Australia and India at Sydney, on January 6, 2015. Photograph: Mark Kolbe/Getty Images

He urged the ICC to impose itself on countries like India who have refused to accept the Decision Review System (DRS), and make it compulsory for all nations.

“The Decision Review System (DRS) should be made compulsory from the ICC and used by every cricket nation. The ICC should fund this, so it’s the same system every game played, it will take time for the players to accept it, but over time if everyone is playing by the same rules then it will be accepted, as it stands now, everyone should say no until all nations agree… not fair otherwise,” he said.

The 45-year-old former leg-spinner also called for a few changes which he believes can improve the way DRS system operates.

“It’s hard to believe the number of decisions that are decided by a cat’s whisker. A millimetre here or there and, suddenly, if you get it wrong, you lose a review. That’s ludicrous. If it’s a close one, and the decision stays ‘umpire’s call’, you should not be penalised by losing a review.

“I also challenge what it actually meant when they say that the ball is ‘pitching in line’.

“As the rule reads now, if a ball isn’t more than half way pitching in the in line area, it’s deemed to be not pitching in line.

“Did I miss something? How can it be ‘half’ pitching in line?

“I think if a ball is touching the ‘corridor’ in any way when it pitches, it is in line.

“And while I’m on the ‘corridor’, it should be lined up from the outside extremity of the stump, rather than the centre. Those additional few millimetres will make all the difference to an umpire’s decision,” he said.

Warne wants cricket, which is perceived as a batsman-dominated game, to have something in it for the bowlers too.

“Lastly, let’s make the stumps a bit taller and wider, continue with the flashing stumps, but make the grooves smaller as we don’t want to see the ball hitting the stumps and the bails (now heavier) not removed !!!”

- Do you agree with Warne’s suggestions?
- Click here and express your views