Cuttack T20: India to go out 'all guns blazing' to level SA series IMAGE: India captain Mahendra Singh Dhoni and vice-captain Virat Kohli inspect the pitch with the groundsman during Sunday's training session, ahead of the second T20 against South Africa at Barabati Stadium in Cuttack. Photograph: Swapan Mahapatra/PTI

India opening batsman Rohit Sharma has called upon his teammates to come out 'all guns blazing' against South Africa in the second T20 international in Cuttack on Monday.

Rohit scored his maiden T20 International century to give India a competitive total of 199 for 5, but the visitors rode on some sparkling strokeplay by J P Duminy (68 not out) and A B de Villiers (51) to overhaul the target with two balls to spare as India lost the first of the three-match series in Dharamsala by seven wickets on Friday.

"Overall, there is room for improvement; I'm sure the guys have learnt from it and they will come back stronger. We have to start really well and do a lot of things right, whether it's batting or bowling, and come out all guns blazing," Rohit told reporters ahead of their second T20I at Barabati Stadium. 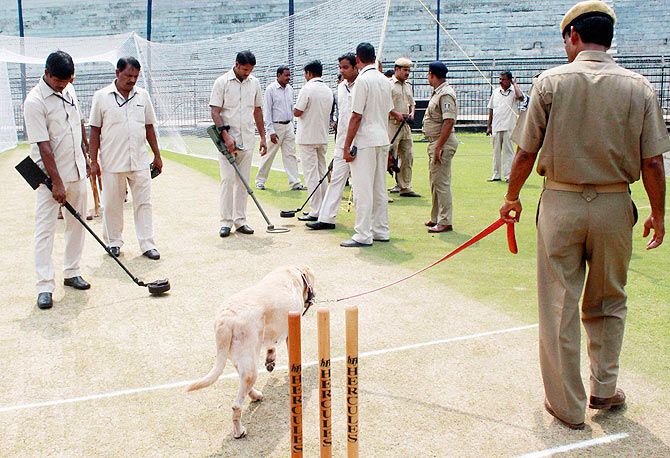 IMAGE: Security personnel with sniffer dog carry out security operations around the pitch at the Barabati Stadium in Cuttack on Sunday. Photograph: PTI

"It was an important knock but we lost the game. I am pretty disappointed. No matter how much runs you score, if you don't win the game your efforts are not counted much. It was an unfortunate loss but I am sure we will come back strong."

India will aim to fix their bowling frailties as they face a do-or-die situation against the tourists on Monday.

Just like Rohit did in India’s innings in the first T20, South Africa also took full advantage of the flat pitch at Dharamsala and easily managed a run-rate of 10 per over.

Dhoni used four bowlers in the first seven overs, but success was hard to come by.

India will have to give their bowling attack some real hard thought going into the second T20 match.