News
Business
Movies
Sports
Cricket
Get Ahead
Money Tips
Shopping
Sign in  |  Create a Rediffmail account
Rediff.com  » Cricket » Rohit out for a duck as opener in warm-up match

Board President's XI captain Rohit was dismissed for a two-ball duck by South Africa pacer Vernon Philander on the third and final day of the warm-up match. IMAGE: Playing as an opener, Rohit Sharma fell for a duck in the three-day warm-up match between Board President's XI and South Africa. Photograph: Ryan Pierse/Getty Images

Rohit Sharma's hopes of a Test comeback took a slight jolt as he was dismissed for a duck on the third and final day of the warm-up match between Board President's XI and South Africa, in Vizianagaram, on Saturday.

Board President's XI captain Rohit was dismissed for a two-ball duck by South Africa pacer Vernon Philander in the second over of the innings, as he got an edge and was caught behind by substitute wicketkeeper Heinrich Klaasen.

India's Test opener Mayank Agarwal also failed to make the opportunity count as he fell for 39. Wicketkeeper-batsman Kona Bharat stroked an entertaining 71 from 57 balls, while Gujarat's Priyank Panchal hit a solid 60, and Mumbai's Siddhesh Lad made 52.

India reached 265 for eight in 64 overs at stumps on the final day, in reply to South Africa's first innings total of 279 for six.

South Africa's spinner Keshav Maharaj picked up 3-35, while Philander bagged 2-27 as the rain-hit match finished in a draw.

It remains to be seen if the team management still believe in opening the innings with Rohit in the upcoming three-Test series against South Africa, starting on October.

They also have another option in Punjab's young batting sensation Shubman Gill. He has been among the runs recently, with two fluent innings for India 'A' against South Africa 'A' -- 90 from 153 balls and 92 from 137 balls -- in the two unofficial Tests earlier this month.

India vice-captain Ajinkya Rahane had given his firm backing to Mumbai team mate Rohit, saying it is hard to see him sit out in Test cricket.

Rohit, who didn't make it to the playing XI in the two-Test series in the West Indies, could be given another opportunity to revive his Test career, with the selectors looking towards him opening the innings.

He is tipped to open the batting in the upcoming three-Test series against South Africa -- a position where he has excelled in ODIs -- after regular opener KL Rahul was dropped following his poor showing in the Caribbean.

Asked whether he was in favour of Rohit opening the innings in Tests, Rahane replied: "I don't know yet whether Rohit will open the innings. If he does, I will be happy for him."

"I said in the West Indies also, it is hard to see a player like Rohit sitting out. He worked so hard and if he gets an opportunity, I will be very happy and I sure, he will do well. We all know the quality he has -- special talent.

"If a player scores five hundred in the World Cup, then he should be given a chance in the Test format. If he is in the Test team, then he must play. A player like should him not warm the bench," Gambhir had said.

Ahead of the series against South Africa, India got a major setback as pacer Jasprit Bumrah was ruled out of the series due to a minor stress fracture in his lower back.

Bumrah has been replaced by Umesh Yadav in the squad. 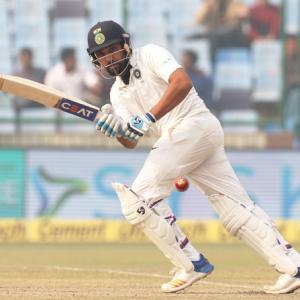