News
Business
Movies
Sports
Cricket
Get Ahead
Money Tips
Shopping
Sign in  |  Create a Rediffmail account
Rediff.com  » Cricket » Had to 'beg and plead' to open innings for India: Tendulkar

Had to 'beg and plead' to open innings for India: Tendulkar

'What I am trying to say here is, don't be afraid of failure.' 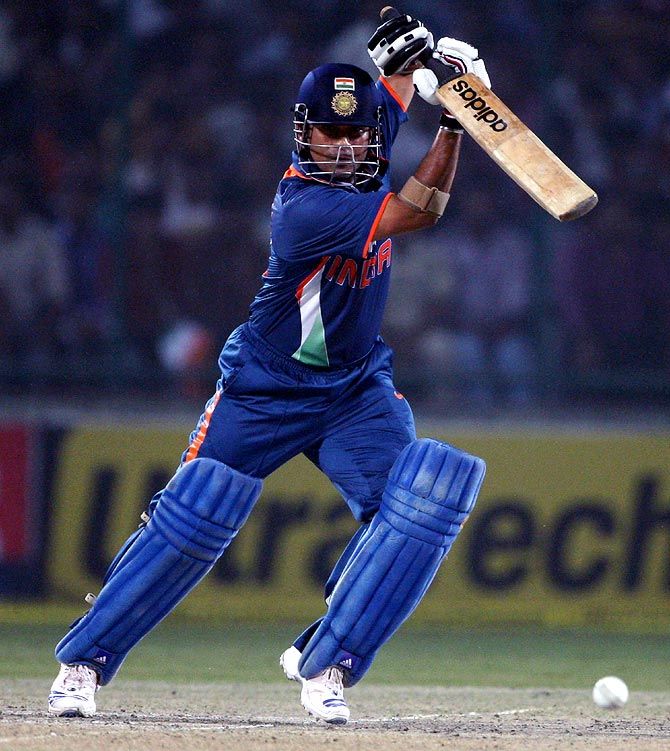 IMAGE: Sachin Tendulkar recorded scores of 82, 63, 40, 63 and 73 in his first five innings as an opening batsman in ODIs. Photograph: Mark Kolbe/Getty Images

India's batting great Sachin Tendulkar says he had to "beg and plead" to open the innings in an ODI against New Zealand in 1994, recalling a major turning point of his career.

The switch from middle-order to opening the innings proved to be a masterstroke as Tendulkar finished with a world record 49 hundreds in the 50-over format.

Sharing a video on LinkedIn, Tendulkar recollected the moments leading up to that one-dayer against New Zealand at Auckland.

"In 1994, when I started opening the batting for India, the strategy used by all teams was to save wickets. What I tried to do was slightly out of the box," he said.

"I thought I could go up front and take the opposition bowlers on. But I had to beg and plead to please give me a chance. If I fail, I won't come after you again," he added.

Using that move as an example, the prolific former batsman urged his fans to never shy away from taking risks because of the fear of failure.

"In that first match (against New Zealand at Auckland), I scored 82 off 49 balls, so I didn't have to ask again if I would get another chance. They were keen for me to open. But what I am trying to say here is, don't be afraid of failure," the 46-year-old Tendulkar said.

While he may have ended with a 49 ODI centuries, Tendulkar's first ton in the format came after a long wait of five years.

It was in September 1994 that he hit his first ODI hundred, against Australia in Colombo, having made the switch from the middle-order to opening the innings.

Tendulkar finished his ODI career with 18426 runs in 463 matches -- the most by any in the history of the format.

Source: PTI© Copyright 2021 PTI. All rights reserved. Republication or redistribution of PTI content, including by framing or similar means, is expressly prohibited without the prior written consent.
Related News: Sachin Tendulkar, ODI, New Zealand, India, IMAGE
SHARE THIS STORYCOMMENT
Print this article
Retirement: Gavaskar got it right, what about Dhoni?