Ranji: Harbhajan brings Punjab back in the hunt against Saurashtra

Punjab captain Harbhajan Singh led from the front as his four-wicket haul brought Punjab right back in the hunt on the penultimate day of their Ranji Trophy semi-final against Saurashtra in Rajkot on Saturday.

Harbahajan grabbed four for 60 ---his best figures in the current Ranji season as Saurashtra were bowled out for paltry 170 which meant Punjab were required to chase 349 in 109 overs as the hosts had a commendable 178 run first innings lead.

The visitors were 45 for two, needing another 304 runs with eight wickets in hand. In-form players Jiwanjot Singh and Taruwar Kohli were dismissed by left-arm seamer Jaydev Unadkat.

However Punjab's chances will depend on how the trio of Ravi Inder Singh, Mandeep Singh and Uday Kaul negotiate the spin twins offie Kamlesh Makvana and left-arm spinner Vishal Joshi.

Punjab made a spirited comeback after being dismissed for 299 in the first innings with Harbhajan opening the bowling attack alongside Siddharth Kaul, who snapped three for 53.

It was the senior spinner who removed the stodgy veteran Shitanshu Kotak (53), Aarpit Vasavada (6) and Kamlesh  Makvana in one of his spells as Saurashtra from a relatively comfortable position of 102 for one lost seven wickets for the addition of 28 runs.

With the fourth day's track offering some help, Harbhajan got appreciable turn and bounce as none of the Saurashtra batsmen looked comfortable during the 26 overs that he sent down.

Only first innings centurion Sheldon Jackson (44 no) offered some resistance but that wasn't good enough with as many as seven home team batsmen failing to register double digit scores.

Kotak (53) and Sagar Jogiyani gave the hosts a good start in the second innings putting 50 runs before Jogiyani was dismissed by left-arm spinner Bipul Sharma.

Rahul Dave started off well during his innings of 23 but became Harbhajan's first wicket after being adjudged leg before for 23.

Saurashtra were at that stage 102 for two from where Harbhajan and Kaul ran through the hosts. 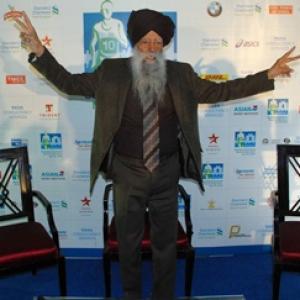