A round-up of Ranji matches played on Tuesday Former champions Mumbai and Saurashtra featured in an exciting draw, in Mumbai, on Tuesday after both teams squandered chances to win the contest on the fourth and final day of their Elite Group A Ranji Trophy game.

Mumbai, champions on 41 occasions and ahead of the visitors by 46 runs on the first innings, declared their second innings closed in the morning session at 238 for 8, leaving Saurashtra a target of 285 in 72 overs.

Saurashtra were sailing along merrily after being 79 for two with the 113-run third wicket stand between Viswarajsinh Jadeja (71 in 129 balls) and Sheldon Jackson (57 in 118 balls) bringing them closer to the target.

Jadeja was run out by a direct throw from point by Jay Bista to break the stand at 192 and then a double strike with the use of short balls in one over by medium pacer Minad Manjrekar put the skids on Saurashtra.

Manjrekar got rid of both Jackson, caught slashing at deep point when Saurashtra needed 55 in ten overs, and Prerak Mankad (24 in 21 balls) three runs later to raise visions of a Mumbai victory.

Manjrekar got two more wickets in that spell to send back Arpit Vasavada and rival captain Jaydev Unadkat after which Saurashtra downed the shuttlers with Chirag Jani holding fort at one end.

After four balls in the final over, the game was called off as a draw with the visitors on 266 for 7, needing 19 more runs to pull off what would have been a come-from-behind win.

Jani (9) and Dharmendra Jadeja (8) were the unbeaten batsmen at the crease when the match ended.

Manjrekar finished with impressive figures of 4 for 39, while Shivam Dube got 2 for 50.

Mumbai secured three points to boost their tally to 11 and are 14th out of 18 teams in the combined A and B Groups standings with two matches left.

Saurashtra secured one point to remain on top of the combined standings with 26 points with one game in hand.

Meanwhile at Shivamoga, hosts Karnataka trounced Railways by 176 runs. Senior off-spinner K Gowtham rose to the occasion and returned with match-winning figures of 6-30, as Railways were bundled out for 185 in their second essay.

At Nagpur, the Gujarat-Vidarbha game ended in a tame draw with the hosts taking the first innings lead and grabbing three crucial points. Gujarat got one point.

At Raipur, hosts Chhattisgarh took three points, courtesy the first innings lead. But the hosts survived a scare with Maharashtra taking as many as six wickets in their second innings.

Hosts Assam defeated Goa by 7 runs in a pulsating Ranji Trophy Group C game, in Guwahati, after having conceded a narrow first innings lead to the visitors.

Resuming at their overnight score of 166 for 6, Goa needed 218 for an outright win, but were shot out for 210 at the Barsapara cricket stadium here on the fourth and final day.

Goa's hopes were pinned on Amit Verma and Lakshay Garg, who started the final day from their respective overnight scores of 62 and 57.

Verma could add only 12 runs to his overnight score and fell for 74. He was the seventh man to be dismissed.

Then Garg (73) staged a lone battle and took the visitors to the doorsteps of a thrilling victory.

However Garg, who hit seven boundaries and two sixes in his 105-ball knock, could not finish the job. He was the ninth man out with 202 on the board.

Das had bagged three wickets in the first innings.

The victory helped Assam take their points tally to 20 from 7 games. They are fourth on the ten-team table, while Goa are at the bottom of the standings.

Meanwhile, at Ranchi, left-arm spinner Shahbaz Nadeem bowled hosts Jharkhand to an 81-run victory over Services with excellent figures of 7 for 62.

Jharkhand had conceded the first innings lead and then turned the match around to bag six points and boost their tally to 30 from 7 games. They are in third spot.

At Jammu, Odisha defeated Jammu and Kashmir by eight wickets.

The game between table toppers Rajasthan and Haryana at Jaipur ended in a tame draw with the hosts walking away with three points on the basis of the first innings lead.

TN loses to Himachal Pradesh, out of knock-out phase

Tamil Nadu suffered a nine-wicket defeat against Himachal Pradesh in a Elite Group 'B' Ranji Trophy match in Dharamsala as it crashed out of contention for the knock-out phase.

The victory, third of the season, took Himachal's tally so far to 22 points while the visitors remained with just 12 points from seven games -- four draws and two defeats and sole win, failing to qualify for the knock-out phase.

The home team rattled up 111 for 1 to seal the win after Tamil Nadu folded up for 345 in the second innings following a middle-order collapse after centuries by Abhinav Mukund (128) and captain Baba Indrajith (106).

Resuming at the overnight score of 178 for 2, the onus was on Mukund and Indrajith to occupy the crease for a long period and bat HP out of the game.

Indrajith found a resolute partner in all-rounder Vijay Shankar (56, 100 balls, 5X4, 1X6) and the two were involved in a 109-run stand for the fourth wicket.

While Indrajith was his watchful self, Shankar looked to push on and never missed out on a scoring opportunity.

At the lunch break, Tamil Nadu was 286 for 3, having added 107 runs in the first session, on the back of Shankar's enterprising play.

Shankar reached his 50 off 89 balls but fell soon after after when HP skipper Prashant Chopra had him stumped by 'keeper Ankush Bains.

Chasing the target, Ankush Bains launched a clinical assualt on the TN bowlers, hitting six fours and four sixers in his unbeaten 38-ball 64 to power Himachal home just in 15.3 overs.

The other opener Raghav Dhawan (39) was sent back by left-arm spinner R Sai Kishore while going for a big hit but Rishi Dhawan (4 not out) finished the game, blasting a four of Kishore.

In other games in the group, Andhra had to settle for three points against Bengal at Visakhapatnam while visitors Punjab could not reach its target against Hyderabad despite an attacking ton by the young Shubman Gill (148, 154 balls 16X4, 2X6).

Ashutosh Aman returned with a match haul of 12 wickets to help Bihar secure a thumping 273-run victory over Nagaland in their Ranji Trophy Plate Group fixture in Patna.

The left-arm spinner, who claimed seven wickets in the first innings, grabbed 5/49 in the second to finish with a match haul of 12/96, as Nagaland folded for 173 in their tall pursuit of 446.

This was the former Services cricketer's fourth successive 10-wicket haul. Aman, who was adjudged Man-of-the-Match for the third time from four matches, is now the leading wicket-taker with 51 scalps from 10 innings with an astounding average of 5.54.

Resuming on 112/7, Nagaland lost Inakato Zhimomi (18) in the fourth ball of the day with Vivek Kumar (5/65) completing his five-for.

Skipper Rongsen Jonathan, who was batting on 57 overnight, found fine support from Rachit Bhatia (17) as the duo put on 53 runs for the ninth wicket before Aman broke the partnership.

Jonathan completed his century in 112 deliveries, only to be trapped leg before wicket off the next ball, with Aman racing to another five-wicket haul.

This was Bihar's fourth win from six matches, and they now have 27 points, 10 points behind leaders Uttarakhand, who have played one more match.

At the CAP Siechem Ground in Puducherry, the match between leaders Uttarakhand and Puducherry started afresh on the fourth day, with a new toss taking place on a fresh pitch.

However, only 15 overs were played before the match was called off, owing to inconsistent bounce from the pitch and both teams settled for one point each. 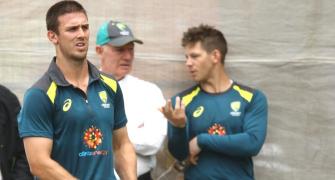 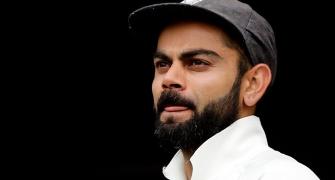 Check out Kohli's message for batsmen...

I don't need to carry banner for people to know who I am: Kohli 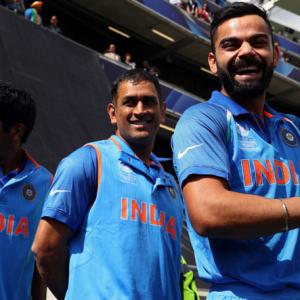 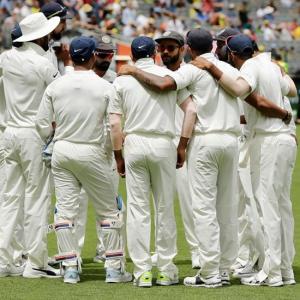