IMAGE: Bengal's Sudip Gharami hit 13 fours and a six to score an unbeaten ton on Day 1 of the Ranji Trophy clash against Jharkhand. Photograph: BCCI Domestic/Twitter

Young Sudip Gharami finally did justice to his talent with maiden first class hundred that steered Bengal to a commanding 310 for one against Jharkhand on the first day of Ranji Trophy quarter-final, in Bengaluru, on Monday.

Jharkhand's pedestrian effort with the ball also helped Bengal's cause as Gharami, who had a highest score of 27 in his four previous appearances, showed fine temperament and impressive technique en route his unbeaten 106-run knock that came off 204 balls with 13 fours and a six.

While Gharami was methodical in his stroke-play, Majumdar's batted with utter disdain for rival bowlers as his innings could be called a highlight package of "pull-shots".

The Jharkhand attack was also hamstrung when Rahul Shukla sustained an injury while fielding just before the second new ball was taken.

Bengal were inflicting the similar kind of ignominy that Jharkhand had inflicted on Nagaland when they made a mockery of a contest in the pre quarter-finals by scoring 880 runs.

Skipper Abhimanyu Easwaran (65) and Abhishek Raman (41 retd hurt) laid the foundation by blunting the new ball attack and then on a good batting surface, it was all about punishing the loose deliveries.

In the past two seasons, good things were heard about Gharami, who had made his debut during the 2020 Ranji Trophy finals against Saurashtra but appeared shaky during that high-profile game.

Head coach Arun Lal, who has seen the 23-year-old as a teenager at his own cricket academy, always had faith in his talent and that shone through on the day.

"He was once rejected from district age-group team because the authorities had problems with me. I remember when he was a teenager, he would accompany me to various coaching centres across districts for a net session as clubs wouldn't enrol him," Gharami's childhood coach Debesh Chakraborty said.

"Once Arun saw him (Gharami), he gave the boy chance to have a place to practice permanently."

"Once, a club told us that we need to come at 5:30 am in the morning and we will get two hours to have nets till 7:30 am before their boys turn up for training. I would arrange for four net bowlers who would bowl to Sudip. This Ranji century is an ode to his struggles," said Chakraborty, known as one-stop solution for any cricketer wanting to get match practice.

A fine back-foot player, Gharami prefers the on-side more and the drives and the pulls that he executed against Jharkhand was indicative that he was confident about his scoring areas.

To help his cause, all the Jharkhand pacers bowled either short on both sides of the wicket or bowled wide outside the off-stump.

Against quality spinners like Shahbaz Nadeem (0/61) and Anukul Roy, Gharami used his feet well and would time and again come down the track and drive on either side of the wicket.

Even in his 90s, there was no nervousness as he flicked Sushant Mishra (1/75) to reach 99 and then completed his hundred.

Gharami's father was once a daily contract labourer and to ensure that his son is never deprived of anything, worked his way up and is now a labour contractor.

"They weren't well off at one stage but over the past few years, they have moved up the ladder. His father is doing well and Sudip, apart from playing first-class, plays for CAB's top club East Bengal. But Sudip isn't money-minded and that has helped him as cricketer," the coach said. Debutant Suved Parkar hit a stroke-filled 104 to guide Mumbai to a strong 304 for three on the first day of their Ranji Trophy quarter-final against Uttarakhand.

Armaan Jaffer (60) and Sarfaraz Khan (69 not out) also slammed half-centuries as the 41-time Ranji Trophy winners dominated the day and the trio justified skipper Prithvi Shaw's decision to bat first.

Parkar, who got a life, anchored the innings. The 21-year right-handed batter, who has played for India U-19, struck eight boundaries and two sixes in his 218-ball knock.

On the day, he also joined the likes of his skipper and coach Amol Mazumdar to score a hundred on Ranji debut.

Along with Jaffer, Parkar rallied the Mumbai innings with a 112-run third-wicket stand after his team was in a spot of bother at 64/2, having lost both openers Shaw (21) and Yashashvi Jaiswal (35) cheaply.

Parkar, who impressed with his footwork, then found an able ally in an in-form Sarfaraz, who was at his aggressive best, as the duo compounded the bowling team's woes by adding 128 runs for the fourth wicket.

After the fall of two quick wickets, Parkar and Jaffer played with caution in the initial stage. But, after they got in to their groove, they upped the ante.

The duo played shots on all sides and made the opposition bowlers toil hard. Jaffer, who hit seven boundaries and two sixes in his 133-ball knock, lofted leg-spinner Dikshanshu Negi to complete his fifty.

Parkar nudged pacer Akash Madhwal for a single to reach his maiden half-century.

Mumbai lost only one wicket in the extended second session of play, which started late due to a wet outfield.

Once Jaffer departed, Parkar took the onus on himself to score and with Sarfaraz ensured that Mumbai did not lose a single wicket in the final session.

Parkar reached the three-figure mark with a boundary off Madhwal towards he square-leg region.

Sarfaraz's knock was laced with eight boundaries and one six.

Mumbai lost Shaw (20) early. Shaw scored a boundary on the first ball -- a cover drive off Deepak Dhapola (3/53) -- and then hammered two more fours in the opening over.

Shaw, who was looking in his elements, was however undone by Dhapola's inswinger in the seventh over, knocking off the off-stump as Mumbai lost its first wicket for 36.

MP bowlers shine as Punjab fold for 219 on Day 1

Opting to bat, Punjab, who banked on their young core to deliver against Madhya Pradesh, found themselves in a spot of bother from the onset at the Alur Cricket Stadium.

Punjab did not have the ideal start, losing Shubman Gill (9) cheaply to Datey. Punjab skipper Abhishek Sharma (47) and Anmolpreet Singh (47) put on 81 runs for the second wicket to steady the ship.

But Datey struck again removing the well-set Sharma in the 24th over, after which things started to go awry for the 1992 Ranji Trophy winners.

With their back against the wall, Sanvir Singh and wicketkeeper-batter Anmol Malhotra played patient knocks of 41 and 27 respectively to save Punjab from humiliation.

But their resistance was short-lived as Madhya Pradesh bowlers continued to make inroads.

Agarwal accounted for the wickets of Mandeep Singh and Sanvir. Datey and Agarwal returned with figures of 3/48 and 3/36 respectively.

In reply, Madhya Pradesh were five for no loss.

Madhya Pradesh: 5 for no loss in 1 over.

UP bowlers Mavi, Saurabh restrict Karnataka to 213/7 on Day 1

Shivam Mavi and Saurabh Kumar shared seven wickets between them as Uttar Pradesh reduced hosts Karnataka to 213 for seven on the opening day of their Ranji Trophy quarterfinal match in Alur.

Kolkata Knight Riders pacer Mavi caused maximum damage and broke the back of Karnataka's batting, grabbing the two big wickets of Mayank Agarwal (10) and Karun Nair (29) en route to his fine spell of 11-4-40-3.

Electing to field after the start was delayed due to wet outfield, Uttar Pradesh got off to a perfect start but Mavi dismissed Agarwal cheaply to prolong the Indian Test opener's lean patch.

Agarwal, who had a lacklustre IPL campaign while captaining Punjab Kings and is out of the Indian team for the England Test next month, made a cautious start and took four balls for his 10 before being dismissed in the 13th over.

After Agarwal's departure, Ravikumar Samarth (57) tried to consolidate and along with Karun Nair showed fine intent but left-arm spinner Saurabh Kumar cut short his innings not long after he completed his fifty.

Mavi then returned to haunt again as he grabbed Nair (29) before Saurabh inflicted a double blow in the form of Manish Pandey and Srinivas Sharath in successive deliveries.

Towards the fag end of the day, Saurabh dismissed Krishnappa Gowtham to derail Karnataka further.

At close, Shreyas Gopal was unbeaten on 26 from 47 balls but found company from Vijaykumar Vyashak (12 not out). 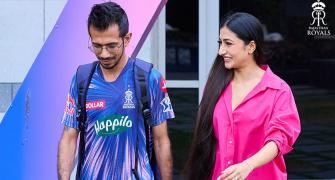 Dhanashree is not Yuzi's 'first love' 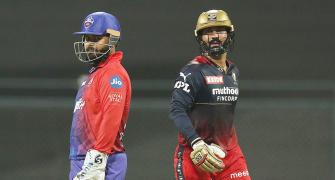 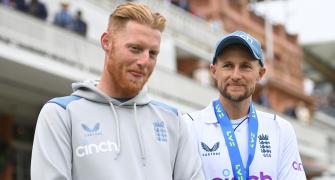 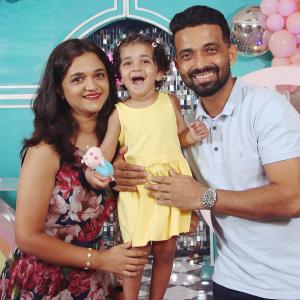 'Most under-rated' Rahane is 34 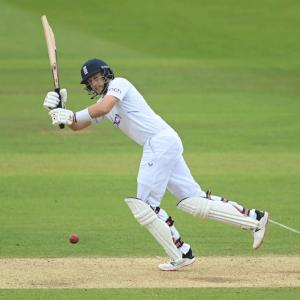