Ranji: Rohit, Iyer hit centuries as Mumbai dominate against UP 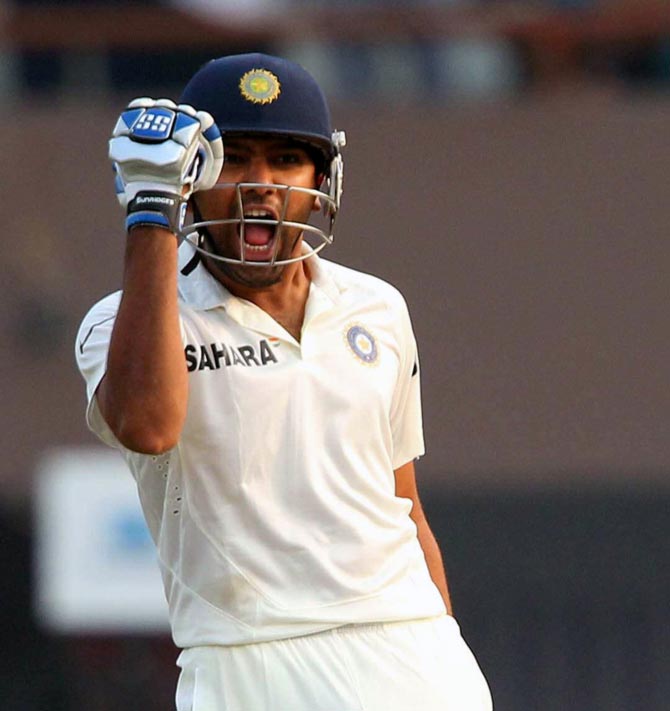 Youngster Shreyas Iyer slammed his third ton of the season, a strokeful 137, while senior batsman Rohit Sharma hit an unbeaten 110 as Mumbai made an imposing 407 for four on day one of their Group B Ranji Trophy match against Uttar Pradesh, in Mumbai, on Saturday.

Making full use of UP captain Suresh Raina's decision to field after winning the toss, Mumbai rode on the two centuries plus useful contributions from captain Aditya Tare (30), fellow-opener Akhil Herwadkar (58) and Suryakumar Yadav (58) to dominate on a batting track at the Wankhede Stadium.

While Iyer hit five sixes and 14 fours in his 110-knock that lasted three hours, Sharma - released from the first Test team after failing to make the eleven at Mohali - utilised the opportunity to occupy the crease for 194 minutes while striking one six and 13 fours in 128 balls.

Both the batsmen played strokes all round the wicket and hardly looked in trouble against UP attack that was without left-arm spinner Saurabh Kumar, who took ten wickets in their previous game against Gujarat at Valsad.

After the openers put on 55 for the first wicket, Iyer got involved in a century stand worth 106 with left-handed Herwadkar for the second wicket and then put on 98 for the third wicket with Sharma who started slowly before opening up to notch his 14th Ranji ton.

Iyer, who scored 173 against Baroda and 200 against Punjab, apart from an invaluable 83 against Tamil Nadu earlier, compiled his fifth first class hundred before edging Bhuvneshwar Kumar to wicket keeper Eklavya Dwivedi in the second over after tea.

However, Sharma continued to punish the bowlers as he added 99 runs for the fourth wicket with Yadav to demoralise the UP attack. At stumps, Siddesh Lad (12) was unbeaten at the other end.

Bhuvneshwar, also released from the Indian Test squad to play this game, was the most successful bowler with figures of two for 97 while tall Ankit Rajput and part-time bowler Umang Sharma secured the other two wickets to fall.

Kolkata: Off-spinner Akshay Wakhare led Vidarbha's superb fight as Bengal squandered a good start to reach 217 for seven at stumps on Day 1 in their Ranji Trophy match, in Kolkata, on Saturday

Abhimanyu Easwaran (58) and Sayan Sekhar Mondal (56) gave Bengal a spectacular start with their 118-run partnership after being invited to bat on a greentop at the Jadavpur University ground in Saltlake.

Wakhare triggered the collapse as he claimed four for 40 with the hosts lost four wickets for 22 runs with left-arm seamer Shrikant Wagh (2/34).

With wickets falling at the other end, it was left-hand No. 3 batsman Sudip Chatterjee who hung around to arrest the slide and remained unbeaten on 49 with Pragyan Ojha (1) at the other end at stumps.

Making a comeback into the side after recovering from an injury, the 20-year-old Easwaran survived an early scare when on nine he was bowled by Swapnil Bandiwar in the sixth over of the day but to his luck the Vidarbha bowler had over-stepped.

Easwaran went on to notch his sixth first class half-century in the post-lunch session, while two overs later Mondal struck his maiden fifty.

Soon, all hell broke loose for Bengal after Easwaran edged one behind the stumps with Wagh giving the breakthrough in the 44th over.

Fresh from his seven-wicket match haul in their win over Maharashtra, Wakhare joined in the party castling Mondal in space of nine balls before he claimed the big scalp of the Bengal skipper Manoj Tiwary (3) who perished after poking at an away going delivery to be dismissed caught behind.

New Delhi: Young paceman Navdeep Saini rocked the Maharashtra top-order in a career-best haul of six for 32 as Delhi bowled out the visitors for a paltry 80 to take control of their Ranji Trophy Group A match.

In a sensational spell, 22-year-old Saini polished off the top-five batsmen to reduce Maharashtra to 52 for five after the visitors opted to bat at Feroz Shah Kotla Ground.

Pradeep Sangwan (2/19) and Manan Sharma (2/25) shared four wickets between them as Delhi needed just 25.4 overs to wrap up the Maharashtra innings.

Delhi were leading by 77 runs as they ended the opening day at 157 for four with Dhruv Shorey (54 not out) and Nitish Rana (59) scoring half-centuries.

Skipper Gautam Gambhir failed with the bat as he was bowled by Samad Fallah for six and his opening partner Unmukt Chand (4) also fell cheaply.

Shorey and Rana added 99 runs for the third wicket to stabilise the innings but. Paceman Shrikant Mundhe broke the stand by trapping Rana and wicketkeeper batsman Rishab Pant (19) also his wicket but Shorey kept the one end tight.

Valsad: Opener Priyank Kirit Panchal made a fine hundred while Irfan Pathan impressed on his comeback as Gujarat reached 281 for four on day one of their Ranji Trophy match against Baroda.

Panchal pocketed 17 fours in his patient knock before Manpreet Juneja struck an unbeaten 50 at stumps on the opening day.

Left-arm pacer Pathan, returning to action after a long injury lay-off, picked up two wickets for Baroda and was the pick of the bowlers.

Chandrasekar shines as TN bowl out Andhra for 204

Chennai: Tamil Nadu bowled out Andhra for 204 on the first day of their Group B Ranji Trophy match.

Opting to bat at the M A Chidambaram Stadium, Andhra were off to a disastrous start losing two wickets with just two runs on the board.

Srikar Bharat (56) and Ricky Bhui (35) steadied the ship with a 70-run partnership for the third wicket, before the Bhui fell to Baba Aparajith.

A G Pradeep top-scored for the visitors with a 159-ball 78. He struck six boundaries and a six, and was involved in two half-century stands with Bharat and Bodavarapu Sudhakar (27).

D T Chandrasekar was the pick of Tamil Nadu bowlers, picking up four wickets for 41 runs. Malolan Rangarajan had three scalps to his name.

Only 77.2 overs of play was possible because of bad light.

Gwalior: Jalaj Saxena claimed eight wickets to bundle out Railways for 256 in their first innings before Madhya Pradesh were themselves reduced to seven for two on Day 1 of their Ranji Trophy Group B match.

Electing to bat, opener Saurabh Wakaskar (73) and V Cheluvaraj (50) contributed with half-centuries but Saxena (8/96) along with his spin partner Ankit Sharma (2/58) wreaked havoc.

Faiz Ahmed (30) and Anureet Singh (35 not out) chipped in with some important runs to take the Railways score past the 250-run mark.

Madhya Pradesh also got off to a poor start, losing two early wickets.

At stumps Jalaj Saxena was batting on five and Naman Ojha was yet to open his account.