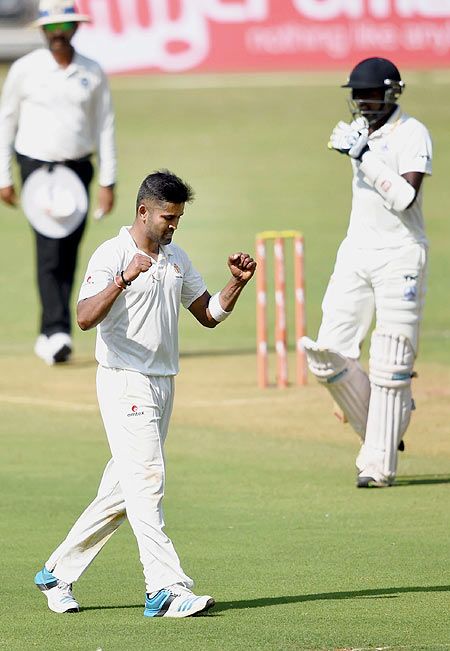 Fancied Karnataka notched up a comprehensive 189-run win over Vidarbha in their Group B Ranji Trophy cricket match with a day to spare in Vadodara on Monday.

The star of the third day's play was seasoned seamer R Vinay Kumar, who returned impressive figures of 5/28 to lay Vidarbha low.

At the Moti Bagh Stadium, Karnataka resumed their second innings from their overnight score of 108/3, an overall lead of 199 runs. They were all out for 209, but not before putting themselves in the driver's seat.

Shrikant Wagh (4/59) and Lalit Yadav (3/90) were the most successful bowlers for Vidarbha.

Overnight on 45, opener Ravikumar Samarth got out after scoring two runs, while Stuart Binny was dismissed for 12.

R Vinay Kumar also shone with the bat, scoring 56 off 86 balls with the help of eight boundaries.

In Vidarbha's second innings, Jitesh Sharma (61)was the only batsman to have made a substantial contribution, as the rest crumbled without a fight.

Delhi conceded a huge first innings lead of 159 runs with Jharkhand enforcing follow-on on the third day in a group B Ranji Trophy encounter despite twin tons from skipper Unmukt Chand and Rishabh Pant in Thumba.

Replying to Jharkhand's first innings score of 493, Delhi were all-out for 334 in their first innings thereby conceding a lead of 159 runs.

In their bid to go for an outright win, Jharkhand skipper Saurabh Tiwary asked Delhi to follow-on but Unmukt and Co gave a good account of themselves to finish the day at 165 for one with a slender lead of six runs.

Delhi will now aim to bat out the final day in order to ensure a point while Jharkhand with three in their pocket will aim to go for a six and if possible seven points from the match.

Starting the day at 225 for 3, the two overnight batsmen Unmukt (109) and Pant (117) took the score to 261 before both were dismissed in quick succession.

The duo added 187 runs for the fourth wicket.

Within an addition of a run, Unmukt was dismissed by Ashish having hit 15 boundaries in his 181-ball knock.

Once Pant and Unmukt were gone, Delhi didn't have the wherewithal to fight it out and atleast get a first innings lead.

In the second essay, Unmukt however carried on his form as he scored 63 off 96 balls with seven boundaries and two sixes. Dhruv Shorey is batting on 67 in company of Nitish Rana (34 batting).

Reigning champions Mumbai tightened their grip over their Ranji Trophy Group A match by bowling out Railways for 160 and scalping four more batsmen after enforcing follow on in Mysore.

Railways began at 76 for three but left-arm spinner Vijay Gohil, together with Shardul Thakur and Balwinder Sandhu ripped apart the Railways' middle order as Mumbai took a handsome 185-run lead.

Railways batsmen managed to get starts but there was no big partnerships as they continued to perish one after another.

Captain Karn Sharma was highest scorer with 24 while Ashish Singh made 22. Nitin Bhille (18) and Arindam Ghosh (17) too got starts but could not convert those into big ones.

Gohil, who had taken two of the three wickets yesterday, got rid of Gosh, Fiaz Ahmed (16) and Karan Thakur (0) to complete his five-wicket haul. Thakur and Sandhu took two wickets apiece.

Mumbai skipper Aditya Tare had no hesitation in enforcing follow on and his bowlers responded again by removing top four batsmen.

Railways ended the third day at 135 for four and are still trailing by 50 runs.

K Vignesh's eight-wicket match haul along with contributions from R Aushik Srinivas and Aswin Crist enabled Tamil Nadu post an innings and 44-run victory over Baroda inside three days and earn a bonus point from their Group A match in Raipur.

Tamil Nadu needed only 52 overs on the third day to take 10 wickets of Baroda.

Resuming on 44 for no loss in their second innings, Baroda, who were all out for 93 in the first innings, 244 runs short of Tamil Nadu's 337, once again faltered with the bat.

Baroda lost opener Dhiren Mistry in the third over to trigger another batting collapse. They slipped from 59 without loss to 89 for five in the space of 17 overs with K Vignesh and Aushik Srinivas sharing seven wickets between them.

Srinivas finished with impressive second innings figures of four for 22, while K Vignesh, who had claimed 5/23 in the first innings, took three for 42 in the second essay to dismissed Baroda for 200 before tea.

Soaeb Tai, coming in at 105 for six, hit a quick-fire 69 off 60 balls, and also put on 61 for the ninth wicket with tailender Murtuja Vahora, but it was not enough to save the match.

Srinivas took the last two wickets off consecutive deliveries to clinch the victory for Tamil Nadu.

Punjab on course of victory against UP

Punjab looked on course for a crushing victory after bundling out Uttar Pradesh for a paltry 95 in their second innings, on the third day of the Ranji Trophy Group A match in Hyderabad.

Punjab, who reached 61-2 at stumps, needing another 51 runs for victory with a full day's play left in the contest.

As many as 19 wickets fell on the third day as Uttar Pradesh quickly got rid of the remaining seven Punjab batmen to dismiss them for 319, grabbing a 16-run first inning lead.

However, Uttar Pradesh faltered in their second innings with the bat as only three of their batsmen could reach doubles figures with Rinku Singh (43 not out) emerging as the top scorer.

Siddharth Kaul turned out to be the wrecker-in-chief as he returned with a six-wicket haul, while Sandeep Sharma and Gurkeerat Mann picked up one wicket each to wrap up UP's innings in just 38.5 overs.

Openers Manan Vohra (34) and Jiwanjot Singh (27) shared a 59-run partnership to give their team a good start, at the Rajiv Gandhi International Stadium.

Earlier, Ankit Rajpoot and Imtiaz Ahmed snapped three wickets each after Punjab resumed their first innings at 243 for three.

Yuvraj Singh, who was at an overnight score of 72, was the first to be dismissed when he was caught by Eklavya Dwivedi off Imtiaz Ahmed before Gurkeerat Mann (1) then was cleaned up in the 85th over by Imtiaz.

Off the very next delivery, Imtiaz sent back Gitansh Khera for d aduck. Ankit then got into the act and removed Vinay Choudhary as Punjab slipped to 267 for seven.

Ankit cleaned up Mandeep Singh in the 105th over after he had taken Punjab across the 300-mark.

With a lead of 16 runs, Uttar Pradesh had to score a good total on board but Siddharth spoilt their broth as he struck the first blow, picking up opener Umang Sharma (5) in the sixth over before he removed Sarfaraz Khan (2) and Samarth Singh (0) in his next over.

Tanmay Srivastava and (17) Eklavya Dwivedi (14) also perished cheaply as UP continued to lose wickets regularly and were bowled out for a lowly 95. 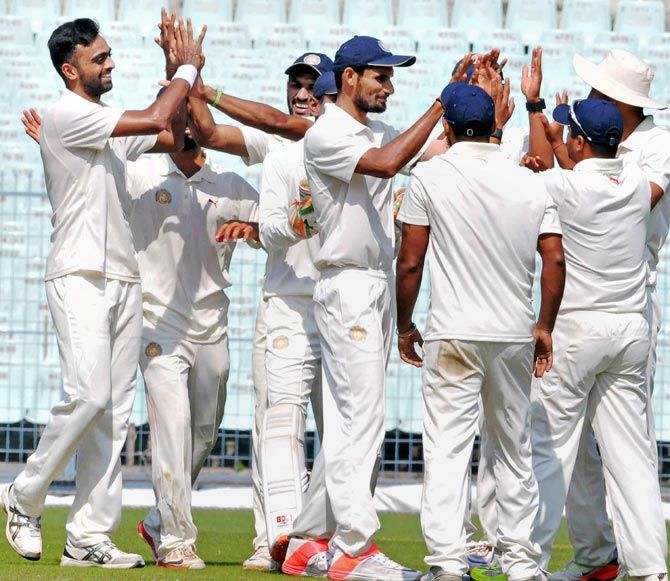 Saurashtra left-arm pacer Jaydev Unadkat returned with a six-wicket haul after a stellar effort with the bat but Assam still managed to secure a small yet crucial first-innings lead on the third day of their Ranji Trophy Group B match at the Eden Gardens in Kolkata.

On a pitch with little assistance for the pacers, Unadkat bowled with pace and accuracy, and struck twice in successive overs en-route to his season's best of six for 48. However, that was not enough as Assam rode on skipper KB Arun Karthik's patient 57 to get an 18-run first innings lead, which could be enough for the bottom-rung side to earn three points.

In reply, Saurashtra were 0-1 after two overs when bad light stopped play with Arup Das, who had a seven-for in the first innings, cleaning up Avi Barot in the first over with a ball that stayed low.

Earlier, Unadkat batting at No. 9 hit an unbeaten 46, staying at the crease for nearly two hours and 25 minutes over two days in a crucial 46-run stand for the last wicket with Shaurya Sanandia
(25) to take Saurashtra to 153 from an overnight 121 for nine.

The last season's runners-up were reduced to 39 for six on Day 2 but the lower order showed some resistance to avoid the blushes.

Unadkat was the top-scorer in Saurashtra's pathetic batting show and he hit three boundaries and two sixes during his 68-ball knock as the last pair went about the task easily with Assam struggling to break the partnership.

Having started with the new ball, Unadkat bowled pace and accuracy and beat the outside edge a few times in his first over but the success eluded him till the 13th over when he dismissed Rahul Hazarika (12) with Amitoze Singh taking a beautiful diving catch to his right at gully.

In his next over, he accounted for Sibsankar Roy (9) who got a leading edge to be caught at mid-off by skipper Jaydev Shah as he had a marathon nine over spell that had five maidens and two wickets for 11.

But it was Assam skipper Karthik who showed some resistance and stitched two important partnerships with Amit Verma (28) and Swarupam Purkayastha (17) that gave them the lead.

Karthik however got out to a rash shot playing across the line as Chirag Jani made the breakthrough before Unadkat and Dharmendrasinh Jadeja (2/13) bundled them out in 62.4 overs.

Saurashtra were yet to open their account but Assam had already sneaked in a wicket with Arup using the new ball and wind to perfection from the club house end.

Odisha fight back on Day 3

Patiala: Rajasthan grabbed the crucial first-innings lead but Odisha bounced back in the second innings after being forced to follow on, in the third and penultimate day of their Ranji Trophy Group B match.

Following on, Odisha reached 244 for two at stumps on Day 3 after they had folded for 172 in their first innings in reply to Rajasthan's 323.

However, Odisha put up an improved performance in the second innings with a solid performance from the top order.

Subhranshu Senapati (90 not out) and Ranjit Singh (89 not out) made unbeaten half-centuries to lead their team's comeback.

Jammu and Kashmir replied strongly in their second innings with three half-centuries but that may not be enough as Himachal Pradesh would be eyeing three points on basis of their first innings lead in a Ranji Trophy Group C fixture.

Having surrendered meekly for 162, Jammu and Kashmir were 337/4 for an overall lead of 129 at close on the penultimate day, as the match headed towards a draw at the JSCA International Stadium Complex.

Himachal Pradesh, who put up 370 in their first innings, have already ensured three points from this match.