Paisa Vasool Index-25: How are the captains faring?

Being captain in a 20-20 game requires exceptional skills; the task might be so onerous that captains may even find it difficult to concentrate on their basic cricketing skills involving batting, bowling and fielding.

Who among the DLF IPL captains is exhibiting the best cricketing skills?

A simple calculation based on the most valuable player index (MVPI) and the Paisa Vasool Index (PVI) indicates that Virender Sehwag of Delhi Daredevils is currently the best performing captain. Sehwag has the highest MVPI and the lowest PVI.

Shane Warne of Rajasthan Royals and V V S Laxman of Deccan Chargers offer the next best value for money, partly because they carry smaller price tags than the other captains.

Recall that the MVPI is calculated by considering the runs scored, strike rate, wickets taken, economy rate, catches taken and run outs effected (the MVPI however does not consider runs saved or conceded in the field, catches dropped etc., although it is easily possible to add these variables). The higher the MVPI, the better the player is performing.

The PVI equals: amount paid so far to the player /MVPI of the player. The PVI can be thought of as the amount (in US$) paid to a player for every run-equivalent scored so far. The lower the PVI, the better the value offered by the player.

We must emphasize again that the PVI is only based on a player's on-field performance and does not take into account his past record, popularity, brand value, and crowd-pulling or TRP-influencing abilities. 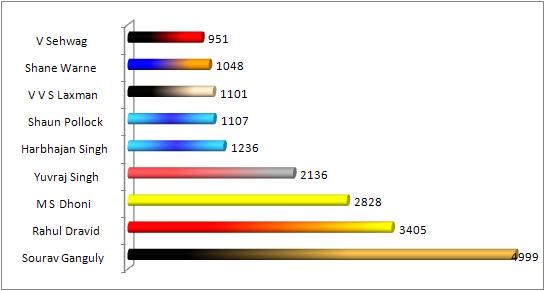 In our next analysis, we will try to figure out which fast bowler is offering the best return on investment.

The full tables (updated till the noon of 6 May 2008) are shown below.

Table 1: The best IPL buys after the first 25 IPL matches (US dollars paid so far for contributing each "run")

This list does not contain names of players who have still not played, or played in just a match or two without having an opportunity to perform.

Table 2 lists the data required for most valuable player (MVP) calculation. It is easy to see that the index has picked out the top performers so far sufficiently well.