The third and deciding one-dayer will be played in Bengaluru on Sunday. 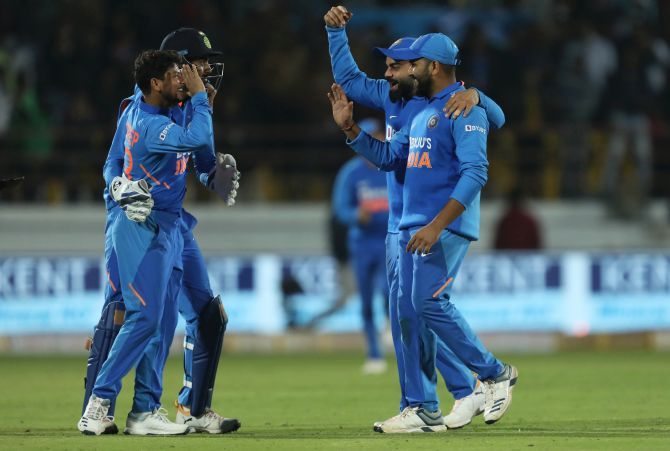 India's rejigged batting order fired on Friday as the hosts beat Australia by 36 runs in the second one-day international at Rajkot to level the three-match series.

Steve Smith kept Australia on course with a typically busy 98 before dragging the ball onto his stumps and the tourists were all out for 304 in the final over.

The Indian top order had powered the hosts to 340-6 with opener Shikhar Dhawan (96) laying the foundation and KL Rahul providing the late assault with a whirlwind 80 at number five.

David Warner and Aaron Finch smashed unbeaten centuries to flatten India in the series opener in Mumbai but the hosts ensured there was no encore.

Manish Pandey plucked a one-handed stunner at cover-point to dismiss David Warner (15) and Ravindra Jadeja had Finch stumped for 33. IMAGE: Steve Smith put on a stiff resistance with ODI debutant Marnus Labuschagne but they just could not get the momentum going in the middle overs. Photograph: BCCI

Even after Labuschagne fell for 46, Smith kept Australia on course while approaching his own hundred.

Left-arm spinner Kuldeep Yadav then intervened, dismissing Alex Carey and Smith in the same over.

Smith, who hit nine boundaries and a six in his 98, was aghast with himself after dragging the ball onto his stumps. IMAGE: Shikhar Dhawan gave India a good start, scoring a 90-ball 96 before getting out to Kane Richardson. Photograph: BCCI

Earlier, India got off to a strong start after being put in to bat at the Saurashtra Cricket Association Stadium.

A couple of near-misses punctured Dhawan's 81-run partnership with Rohit Sharma, who made 42 before falling to Adam Zampa after a clumsy attempt at a sweep shot.

Back in his usual number three spot, Virat Kohli (78) collaborated with Dhawan in a century partnership before a mini-collapse unfolded.

Dhawan holed out four runs short of his century, Shreyas Iyer fell to Zampa (3-50) and Ashton Agar and Mitchell Starc combined to complete a relay catch to send back Kohli. 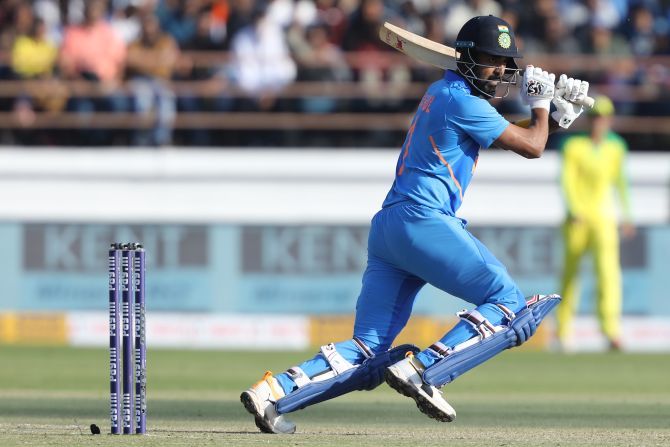 IMAGE: KL Rahul steered the innings well at the back-end to take India to 340. Photograph: BCCI

Playing Rahul, primarily an opener, in the middle order also paid off for the hosts as the elegant right-hander showed his versatility with a 52-ball 80, which included three sixes.

Keeping wicket in the absence of Rishabh Pant, who suffered concussion in Mumbai, Rahul impressed with his glovework too, pulling off a smart stumping to dismiss Finch and taking a couple of catches.

India, however, may face a top order crisis in Sunday's decider in Bengaluru after Dhawan (rib) and Rohit (arm) left the field with injuries.

© Copyright 2021 Reuters Limited. All rights reserved. Republication or redistribution of Reuters content, including by framing or similar means, is expressly prohibited without the prior written consent of Reuters. Reuters shall not be liable for any errors or delays in the content, or for any actions taken in reliance thereon.
Related News: Steve Smith, Shikhar Dhawan, Marnus Labuschagne, IMAGE, BCCI
SHARE THIS STORYCOMMENT
Print this article 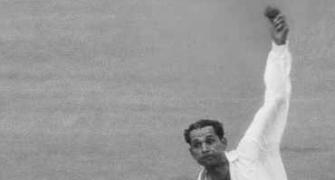 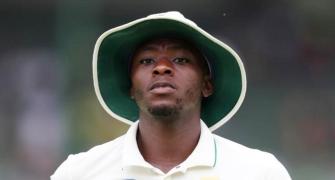 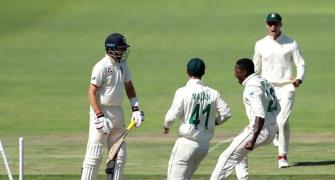 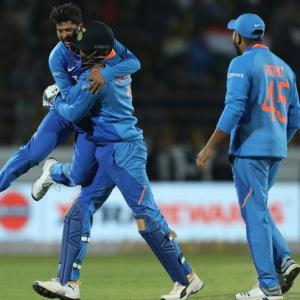 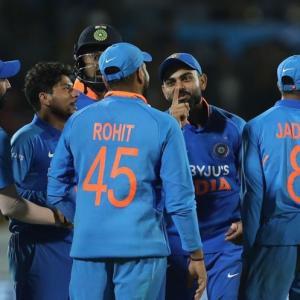