Images from Day 5 of the first Test between India and England, at the M A Chidambaram stadium, in Chennai. IMAGE: England's players celebrate victory over India on Tuesday, Day 5 of the first Test, at the M A Chidambaram stadium, in Chennai. Photograph: BCCI

Brilliant bowing by James Anderson and Jack Leach saw England trounce India by 227 runs in the first Test, at the M A Chidambaram stadium, in Chennai, on Tuesday.

Set a world record 420-run target to go one up in the four-match series, India were shot out for 192 in the second session on Day 5 despite captain Virat Kohli's 72 off 104 balls. 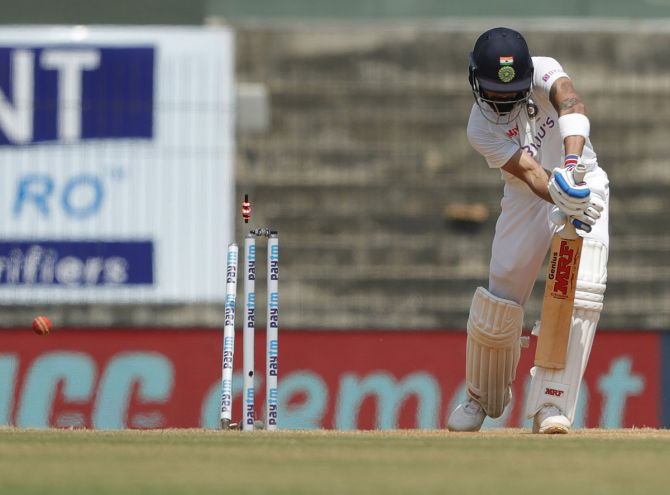 Kohli was the lone hope left for India after opener Shubman Gill (50), who batted beautifully, was sent back by Anderson just when he looked set for a big one.

And when Ben Stokes bowled India’s captain, it was all but over for the home team which went into the series on a high after the incredible triumph in Australia. Courtesy Anderson's brilliance, the fifth day was a mismatch of sorts within an hour and India now needs to win two out of the next three Tests to qualify for the World Test Championship final in June.

Leach (26-4-76-4), who after his first innings humiliation at the hands of Rishabh Pant, finished with the best figures but the effort paled in comparison to the effect that Anderson had on the psyche of the Indian team. Earlier, Anderson produced an inspiring spell to have India reeling at 144-6 at lunch and give England a sniff of victory.

The veteran pacer took the key wickets of Shubman Gill (50), Ajinkya Rahane (0) and Rishabh Pant (11) to go into the break with figures of 3 for 8 from seven overs.

India's hopes of saving the Test rest on Virat Kohli and Ravichandran Ashwin, who were unbeaten on 45 and 2 respectively. 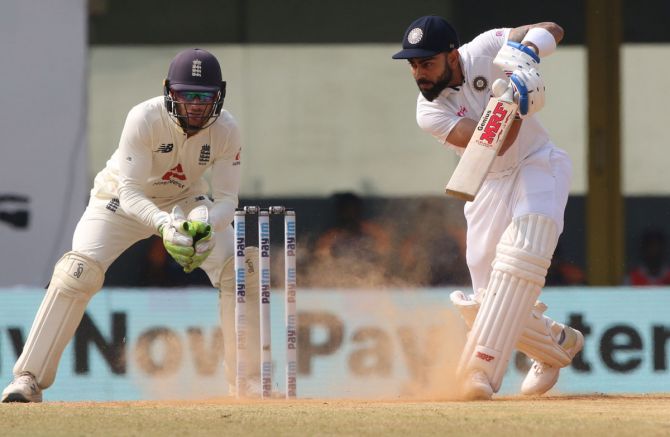 The home side lost five wickets for 105 runs in 26 overs in the morning session.

Courtesy Anderson (11-4-17-3), the match became a mismatch within an hour and India now needs to win two out of the next three Tests to qualify for the World Test Championship final in June.

The player of the match honours went to England skipper Joe Root for his match-defining double hundred in the first innings.

Leach (26-4-76-4), who after his first innings humiliation at the hands of Rishabh Pant, finished with the best figures but the effort paled in comparison to the effect that Anderson had on the psyche of the Indian team.

Jack Leach got England the early breakthrough on Day 5 with the big wicket of Cheteshwar Pujara.

The left-arm spinner got one to turn sharply and bounce; Pujara tried to defend, but the ball took the edge and Ben Stokes completed an easy catch in the slips.

Pujara walked back after scoring just 15 as India were reduced to 58/2.

It was a huge jolt for the home side early on the final day. James Anderson was then introduced into the attack and the move paid off immediately as the veteran pacer produced a cracking delivery to get rid of the well-set Gill. The full delivery reversed in sharply and went through the gap between bat and pad to send Gill's off-stump cartwheeling.

Gill departed after a good knock of 50 from 83 balls.

New-man in Ajinkya Rahane had a huge shout for leg before wicket turned down as Anderson again bowled full and got the ball to reverse. Captain Joe Root took the review but Rahane survived by the narrowest of margins as the TV umpire went by the field umpire's call on point of impact.

However, Anderson got his man with the very next delivery, having Rahane bowled, this time by the incoming one. 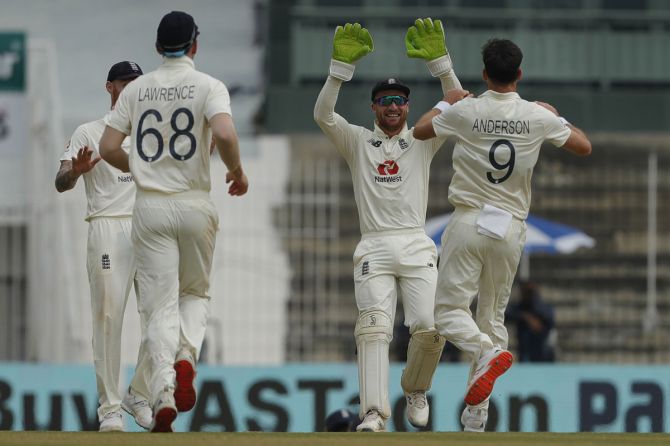 Two big wickets in four balls for Anderson left India in a mess at 92 for 4 in the 27th over.

Anderson continued his wicket ways. This time the slow cutter deceiving Rishabh Pant (11) who looked to drive. The batsman was done in by the change of pace and the leading edge taken by Root at short cover.

Off-spinner Dominic Bess, who replaced Leach, got his first wicket of the innings as Washington Sundar, who had scored a dour 85 in India’s first innings, got the edge and was caught behind for a duck.

Umpire Anil Chaudhary had ruled it not out initially, but ‘Ultra Edge’ showed a clear spike and Sundar made his way back after the review was taken. 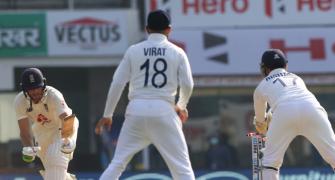 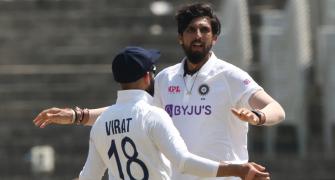 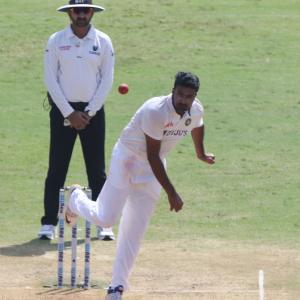