Images from Day 2 of the fourth Test between India and England, at the Narendra Modi stadium, in Motera, Ahmedabad. IMAGE: India's Rishabh Pant celebrates after scoring a hundred on Friday, Day 2 of the fourth Test against England, at the Narendra Modi stadium, in Motera, Ahmedabad. Photograph: BCCI

Wicketkeeper-batsman Rishabh Pant scored a breezy century and Washington Sundar an unbeaten fifty as India recovered from a precarious position to post 294 for 7 at stumps on Day 2 of the fourth Test against England, at the Narendra Modi stadium, in Motera, Ahmedabad, on Friday.

Pant, who fell for 97 in the Sydney Test against Australia and was then dismissed for 91 in the first Test of the ongoing series in Chennai, blazed away to a 118-ball 101, which was studded with 13 hits to the fence and two sixes, to anchor India's innings after a 144-ball 49 by opener Rohit Sharma at the top and the loss of Cheteshwar Pujara (17) skipper Virat Kohli (0), Ajinkya Rahane (27) in quick succession early in the day. IMAGE: Washington Sundar plays a shot on way to his fifty. Photograph: BCCI

Sundar scored a crucial 60 and was at the crease with Axar Patel (11) when stumps were drawn for the day.

India now lead by 89 runs with three wickets in hand. England staged a superb comeback after their bowlers chipped away at the wickets on Day 2.

The home side was reeling at 80 for 4 in the first innings, after 37.5 overs, at lunch, with Rohit Sharma unbeaten after a cautious 32 off 106 balls. IMAGE: Virat Kohli walks back after being dismissed by Ben Stokes. Photograph: BCCI

England's pace duo of James Anderson and Ben Stokes stuck to plan in the morning session by drying up the runs.

Jack Leach gave England an early breakthrough on Day 2, dismissing Cheteshwar Pujara off the last ball of his second over.

The right-hander was given out leg before wicket by umpire Nitin Menon after he leaned forward to defend a full delivery and was struck on the pad. IMAGE: Rohit Sharma goes on one foot to send the ball to the fence. Photograph: BCCI

Pujara went for the review, which showed the impact was in line and the ball crashing into the stumps. He was back in the pavilion after a patient innings of 17 from 66 balls.

Ben Stokes then brought England back in the contest with the big wicket of Virat Kohli, who was caught behind for a duck.

The England was pacer, who had toiled from one end, got the ball to bounce a little more than expected and Kohli hung his bat out, got the edge and was caught behind by Ben Foakes for a duck. It was Kohli's second duck of the series and India were in a spot of bother at 41 for 3, still trailing England by 164 runs.

India had lost two wickets for 17 runs after 15 overs in the morning.

Anderson had India in further trouble in the final over of the morning session, dismissing Ajinkya Rahane (27). India’s vice-captain played away from his body and got the edge, which was taken by Stokes, at second slip, who dived to his left to complete the catch.

Thanks to a resolute knock by the seasoned Rohit, who showed tremendous patience in an unbeaten 32 off 106 balls, India put up 80 runs by lunch, still 125 runs in arrears of England's total.

England picked three wickets for 56 runs, in 25.5 overs, in the session to inch their way back into the contest. Rishabh Pant mixed caution with aggression in an unbeaten 36 as England’s bowlers reduced India to 153 for 6 at tea.

At the break Rishabh Pant was batting on 36 in the company of Washington Sundar on 1.

India are still 52 runs behind England's first innings total of 205.

India added 67 runs in the second session, thanks to Rohit Sharma (49 off 144 balls), who adopted caution with aggression in a conservative approach, even as England's new ball pair of James Anderson (17-11-19-2) and Ben Stokes (17-6-33-2) made life difficult for the home batsman on a track conducive for slow bowlers. Stokes, returning into the attack in place of Anderson, pegged India back further with the key wicket of the well-set Rohit Sharma, who played all over an incoming delivery.

Trying to tap it on the leg side for a single to complete his fifty, he missed it and was hit on the pad.

The umpire ruled it out leg before wicket. Rohit took the review, which showed the point of impact and the point of hitting the wickets and the on-field umpire's decision stayed.

Rohit walked back after scoring 49 and India reduced to 121 for 5, still 84 runs behind England.

Stokes, the only batsman to hit a fifty in the Test so far, rocked India with the two key wickets of Kohli and Rohit.

Leach then gave England their sixth success, dismissing Ravichandran Ashwin. The right-hander chipped a full delivery straight into the hands of Ollie Pope at short midwicket and was out for 13. IMAGE: Rishabh Pant sweeps one to the fence. Photograph: BCCI

Thereafter, it was all about Pant. He fell for 97 in the Sydney Test against Australia and was then dismissed for 91 in the first Test of the ongoing series in Chennai.

He slog-swept Root over mid-wicket for a six to bring up his third Test century in some style off 115 balls.

This was his first Test century at home and captain Virat Kohli along with the entire Indian team celebrated his super effort with the bat. IMAGE: Rishabh Pant celebrates after getting to 50. Photograph: BCCI

India’s lead swelled above the 50-run mark as England struggled to contain the flow of runs.

Pant celebrated his landmark and acknowledged the cheers from the crowd inside the stadium before taking a single off the next ball to get to the other end.

However, his joy was short-lived as Anderson struck, Pant pulling straight to Joe Root at short mid-wicket.

Pant walked back after a magnificent innings of 101 from 118 balls, having hit 13 fours and two sixes. 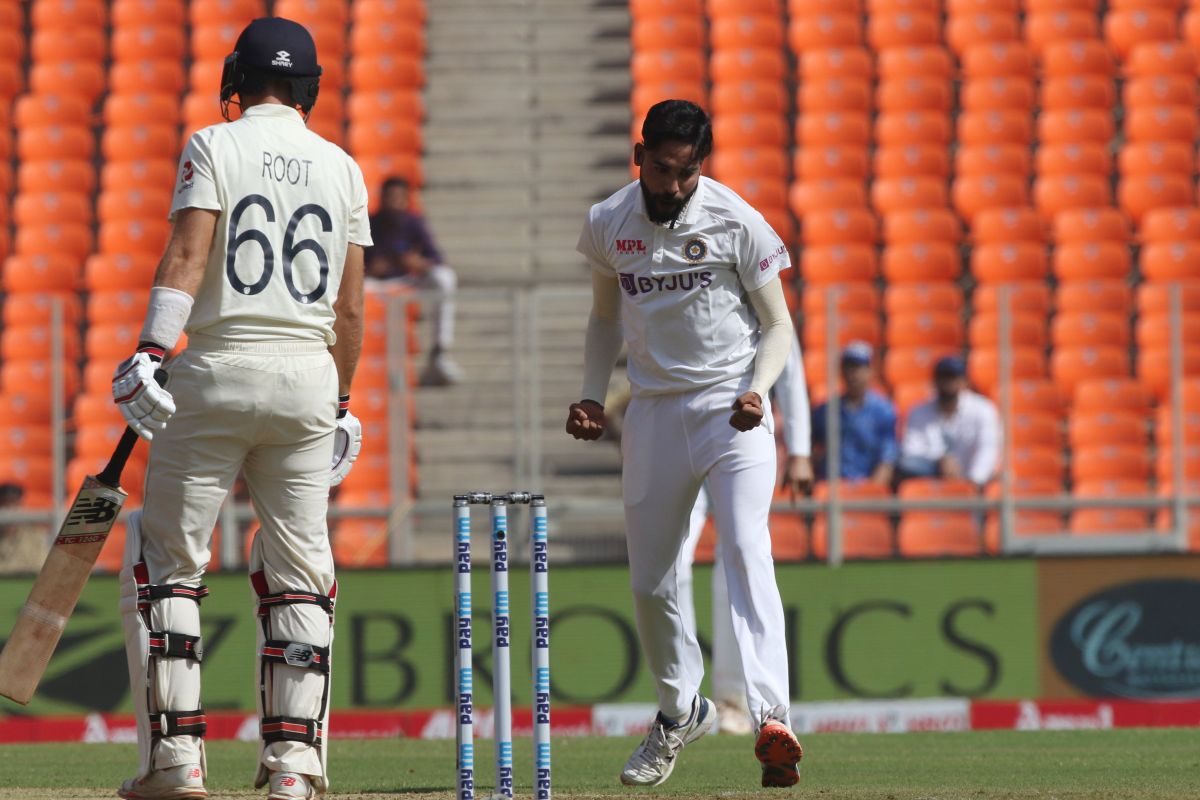 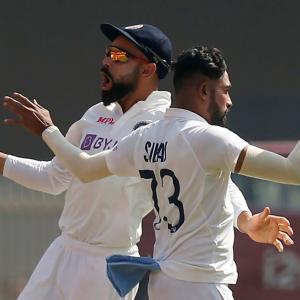