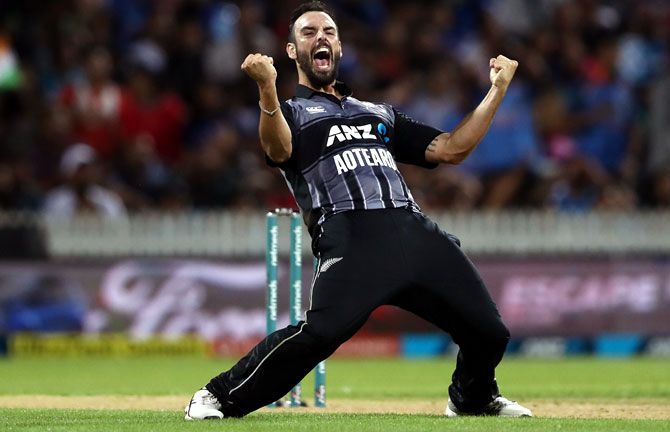 Colin Munro blasted a quickfire half-century as New Zealand pipped India by four runs in a high-scoring thriller to win the three-match T20 International 2-1, in Hamilton, on Sunday.

Munro blasted 72 from 40 balls to power New Zealand to a huge 212 for four in their 20 overs after they were put into bat.

In reply, India finished on 208 for six as no partnerships flourished in the hug run chase.

Vijay Shankar top-scored with a quickfire 43 from 28 balls, while Dinesh Karthik slammed 33 not out from 16 balls but was unable to steer India to victory.

Rishabh Pant (28 off 12) and Hardik Pandya (21 off 11) infused some life into India's chase with some brutal hitting but perished while trying to keep up with a steep scoring rate. Mahendra Singh Dhoni (2 off 4) also could not do much. IMAGE: Colin Munro hits out during his quickfire innings of 72 from 40 balls. Photograph: Hannah Peters/Getty Images

India needed 16 from the final over for victory but the experienced Tim Southee held his nerve quite well to deny Karthik and Krunal Pandya, who hit 26 not out from 13 balls.

All-rounder Daryl Mitchell took two for 27 after he had scored 19 not out from 11 balls at the end.

Exploiting batting friendly conditions at a small ground, New Zealand cut the Indian attack to shreds to post an imposing 212 for four in the series-deciding third Twenty20 International.

Krunal Pandya proved to be the most expensive bowler of the lot as he bled 54 runs in his four-over quota.

If it was not for left-arm Chinaman Kuldeep Yadav (2/26)'s tight bowling in the middle-overs and Bhuvneshwar Kumar (1/37 in 4 overs), India would have got a bigger target to chase. Bhuvneshwar was hit for a six by Munro in his first over but the lean pacer responded with splendid block-hole deliveries in the next over.

The pressure of dot balls prompted Seifirt to go after Vijay Shankar. He went for a big hit but edged it towards third man region where Vijay Shankar made a valiant effort but just fell short as he could just touch the ball.

It was a tough chance but Serifirt, who was on 11, got a reprieve.

The Kiwis though did keep a very healthy run-rate, racing to 50 in just 5.2 overs when Munro heaved one off Krunal Pandya for a huge six and followed it up with a boundary on the off side. Krunal bled 20 runs in that over.

Seifiert, who paddle swept both pacers and spinners with ease, lofted Hardik for a six over long-off. IMAGE: A disappointed Hardik Pandya reacts after a catch is dropped off his bowling. Photograph: Hannah Peters/Getty Images

India's bowlers had conceded 79 runs in first seven overs when captain Rohit Sharma brought Kuldeep Yadav and the leg-spinner straight away made an impact, by getting Seifirt stumped with Dhoni's lightening quick hands at work.

Munro kept going strong as he hammered Krunal for a six to raise team's 100 in the 11th over.

Again it was Kuldeep who came to team's rescue by seeing the back of dangerous-looking Munro while Khaleel Ahmed got rid of Williamson (27).

There was no respite for the Indian bowlers, though, as Daryl Mitchell (19) and Ross Taylor (14 off 7) helped New Zealand finish the innings strong by taking 61 runs in the last five overs. 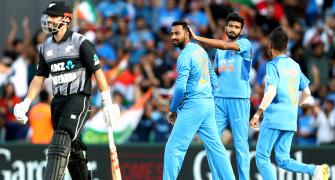 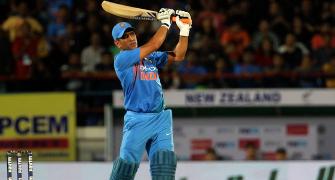 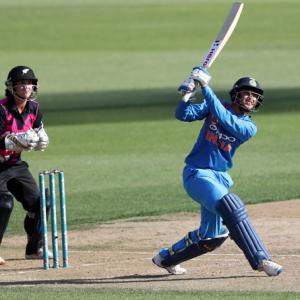