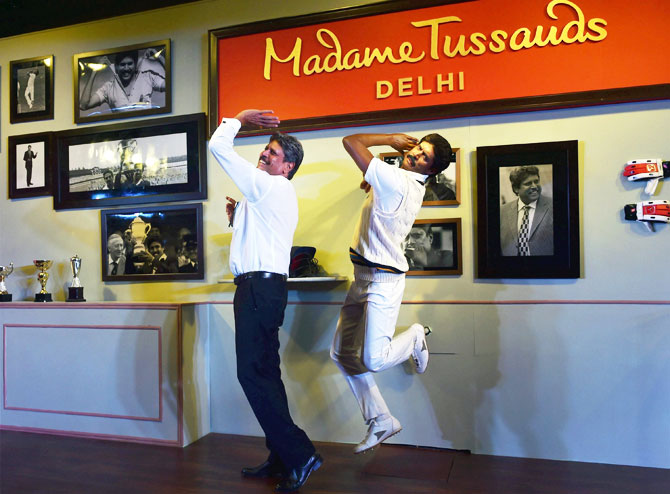 IMAGE: Former Indian Cricket Caption Kapil Dev poses with a wax figure of himself after unveiling the statue at Madame Tussauds Delhi, in New Delhi on Thursday. Photograph: Manvender Vashist/PTI

Indian cricket legend Kapil Dev on Thursday unveiled his first wax figure that will be displayed at the 23rd Madame Tussauds set to open in New Delhi later this year.

Kapil’s incredibly detailed figure was crafted from over 300 measurements and photographs, and is sculpted in an iconic, dynamic bowling pose of the cricket star.

During the unveiling of his figure, the 1983 World Cup-winning captain said, “I’m honoured to get my wax figure among such icons of the nation at Madame Tussauds Delhi. Receiving this at the age of 58 it is a huge credit that furthermore motivates me as an individual to evolve more. I am grateful to the entire team of Madame Tussauds who put all their efforts in the figure and thankful to my fans who have chosen me to be a part of their attraction. 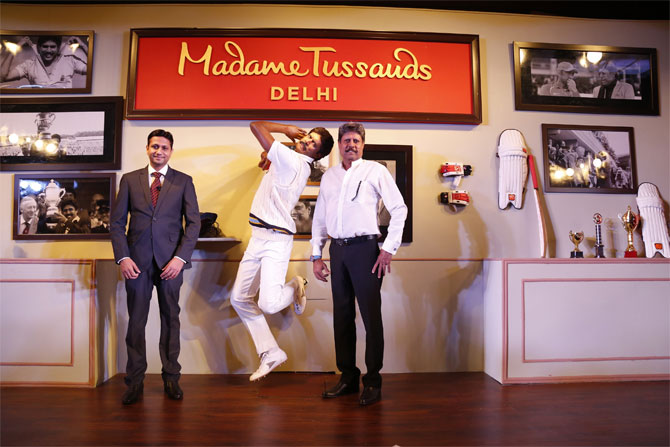 IMAGE: Kapil Dev (right) strikes a pose beside his wax figurine in New Delhi on Thursday.

“The whole process of making of my figure by Madame Tussauds has been an exciting journey, and I am fascinated to see the intrinsic details beautifully captured. I wish Madame Tussauds the best of wishes for the great job that they are putting in. I am also excited to see my figure at the upcoming attraction,” Kapil added.

This pose chosen for the figure reflects a fan favourite , depicting him from the memorable victory of the Cricket World cup in 1983. Guests will automatically be transported back to this iconic moment in time when they pose next to the figure in a specially themed environment.

With this, Madame Tussauds Delhi will also have a dedicated sports zone, involving eminent Sports icons such as the master blaster Sachin Tendulkar, Argentina star footballer Lionel Messi and legendary football star David Beckham. The immersive ambiance of the zone will offer an exciting chance to the visitors to strike a pose with these unforgettable Sports Icons.