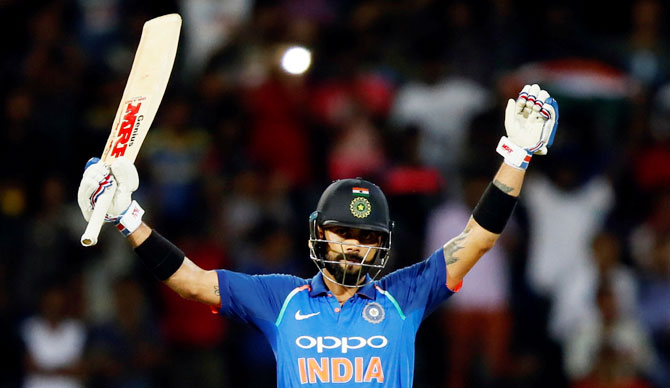 Virat Kohli displayed utmost ruthlessness in both captaincy and batsmanship as India became the first visiting country to inflict a 5-0 sweep on Sri Lanka with a thumping six-wicket victory in the final ODI of the series, in Colombo on Sunday.

In one of the most lopsided bilateral contests in recent history, India have now completed back-to-back rout after humiliating the islanders in the three-Test series, which was also a complete rout.

After Bhuvneshwar Kumar's maiden five-wicket haul enabled India to restrict Sri Lanka to a below-par 238, Kohli for the umpteenth time anchored a successful chase in 46.3 overs with a fluent unbeaten 110. 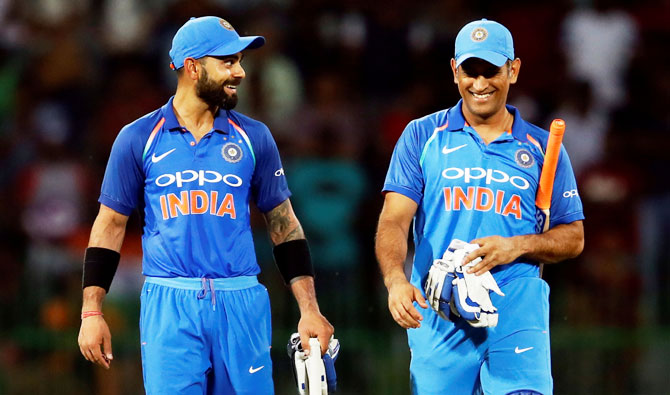 This was his 30th ODI hundred in his only 194th game and is now jointly second highest in list of century makers alongside Ricky Ponting with only Sachin Tendulkar (49 hundreds) ahead of him.

Kohli got able support from Kedar Jadhav (63), who redeemed himself after a couple of ducks adding 109 runs with his skipper for the fourth wicket stand.

The stage was set by Kohli and Manish Pandey 36) with a 99-run stand for the third wicket.

On a pitch that was a bit slower than the fourth ODI, Kohli adjusted his game accordingly, hitting only nine boundaries in 116 balls. 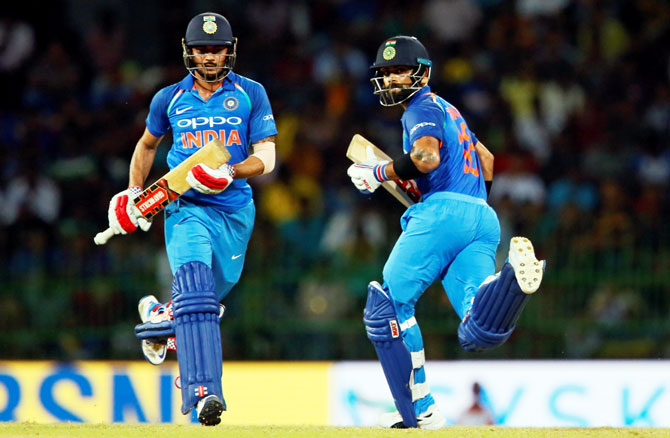 Jadhav hit some delicate late cuts scoring his runs off 73 balls with seven boundaries in it.

Fittingly, the winning runs were hit by Kohli, who is now growing in strength and stature as the leader of a successful unit.

The only people to miss out were comeback man Ajinkya Rahane (5), who was dismissed trying to hook a Lasith Malinga bouncer while Rohit Sharma's lap shot off a Vishwa Fernando delivery was brilliantly caught at fine leg by Malinda Pushpakumara.

However once Kohli hit his customary cover drive to start his innings, things as usual went downhill for the Sri Lankans. 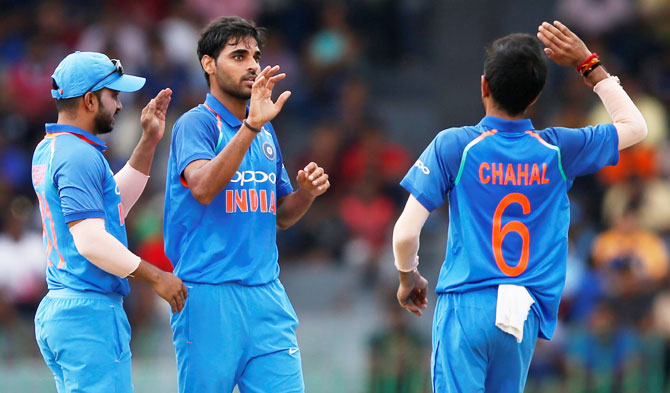 Earlier, Bhuvneshwar Kumar grabbed a career-best 5/42, effecting yet another batting collapse as India skittled out Sri Lanka for 238 inside 50 overs.

Sri Lankan batting once again promised a lot but delivered too little losing as many as seven wickets for 53 runs after they were cruising along at 185 for 3.

A 122-run partnership for the 4th wicket between Lahiru Thirimanne (67) and Angelo Mathews (55) enabled Sri Lanka to reach a position of safety before Bhuvneshwar led the charge with his maiden five-wicket haul. Jasprit Bumrah (2/45), Kuldeep Yadav (1/40) and Yuzvendra Chahal (1/36) were the other wicket-takers. 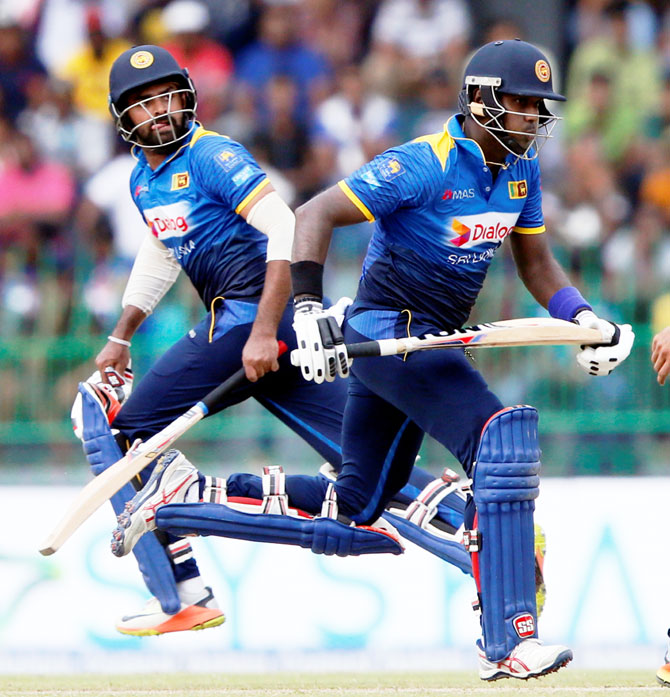 Upul Tharanga (48) opened the innings with Niroshan Dickwella (2) then, and the latter was dismissed in the third over offering a simple return catch to Bhuvneshwar.

Shardul Thakur (0-48 in 6 overs) was completely off colour on the day though, and he was taken for runs by Tharanga, who hit successive boundaries off him, with the 50 came up off 47 balls.

He added 26 runs with Dilshan Munaweera (4) who was dropped to No 3, but then the hosts were jolted in the space of three overs.

Virat Kohli took a brilliant catch at mid-off going backwards to dismiss Munaweera off Bhuvneshwar in the seventh over. Bumrah then had Tharanga was caught behind in the 10th over.

It was a familiar story for Sri Lanka as the scoreboard read 64/3 after the first Powerplay. Thirimanne and Mathews though defied the Indian bowling for 29.3 overs as they put on the hosts’ highest stand throughout this five-match series. Their 50-partnership came off 65 balls as Lanka crossed 100 in the 18th over. 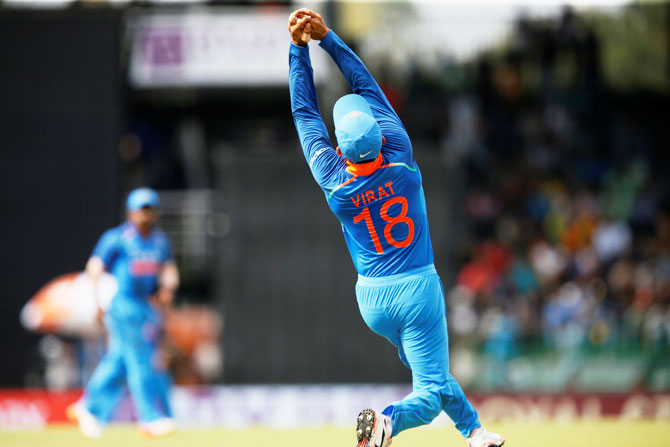 Their 100-partnership came off 122 balls as they looked to have provided a cushion for the lower-order to attack the Indian bowling.

It came to nought though as the duo were dismissed in quick succession.

First, Bhuvneshwar bowled Thirimanne in the 39th over, and then in the 42nd over, Mathews attacked Kuldeep Yadav (1-40) only to lob the ball back to MS Dhoni after mishitting it. An over later, Wanidu Hasaranga (9) was run out. 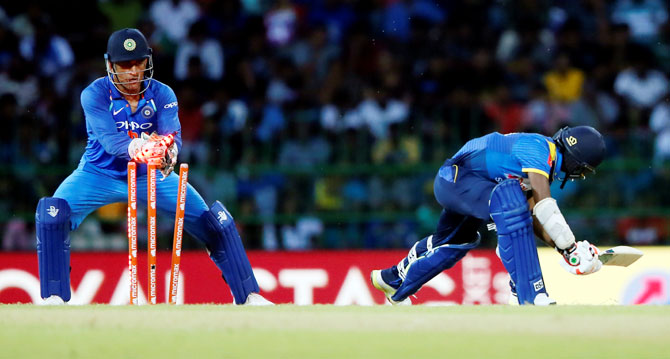 Yuzvendra Chahal (1-36). In doing so, he became the first wicket keeper to notch up 100 stumpings in ODI cricket, moving one ahead of Bhuvneshwar Sangakkara who has 99 stumpings.

Wickets came in a flurry then, as Bhuvneshwar returned to complete his five-wicket haul.

He accounted for Milinda Siriwardana (18) and Lasith Malinga (2). Meanwhile Malinda PushpaBhuvneshwara (8) was bowled by Bumrah as Lanka were once again restricted to an under-par score.

They hosts failed to cross 250 even once during this five-match series, even as Bumrah -- with 15 wickets in this contest -- earned the record for most wickets in a bilateral series with five ODIs. He overtook Australian Clint McKay’s 14 wickets versus Pakistan in 2010. 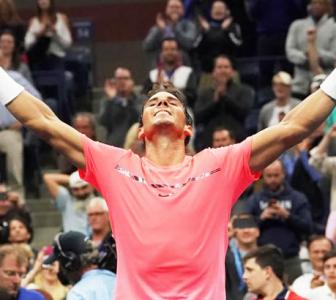 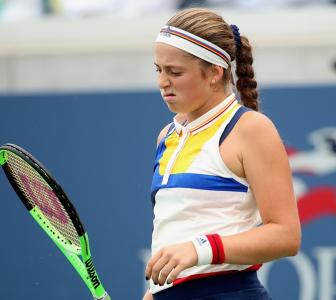 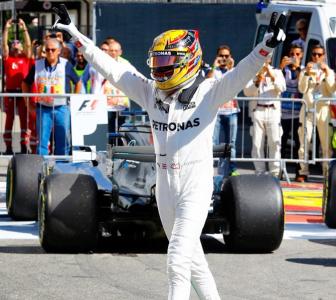 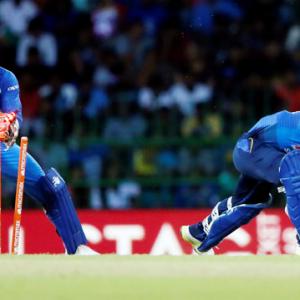 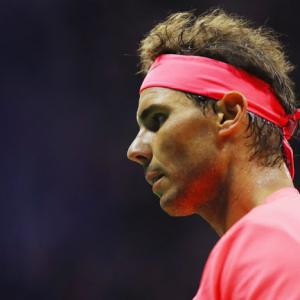