It took just a call from his national team colleague Ravichandran Ashwin and Cheteshwar Pujara was convinced that he needed to play an 'important game' for his club MRC 'A' in Tamil Nadu CA's first division league.

India's dependable No 3 landed and scored 162 for MRC against Crombest Club giving another example of his commitment towards the game irrespective of the level of competition.

He plays only one format now and last played for Saurashtra in the Mushtaq Ali T20 where he scored a quickfire hundred.

"Basically, I wanted to get some match practice in between and also you need to be in touch with the game. Ashwin told me it was an important game for the club, so I came over to play the match," Pujara said in a matter-of-fact manner after turning up for MRC.

"Obviously, I have had a long season and am trying to monitor my workload as well. Overall, I think when you are playing good cricket, it is good to play some odd matches in between and take things forward from here," he added.

That he thinks about the game is well known but he left everyone surprised when he said that one of the reasons for playing TNCA league was to get some good game time against spin bowling on tricky tracks.

"I have heard good things about the TNCA league from some of the Saurashtra teammates. It is good to play on such wickets as playing on such pitches helps me prepare better. If you are doing well in club cricket, you gain a lot of confidence. When it comes to playing spin, this experience will help," he added.

"See...the important thing is to be in touch with the game. Also, I have been batting well this season. It has been fantastic. I think especially the Australia series was really important and the way we played.

Even personally I think it gave me lot of confidence... I have realised my game even better."

He is happy that he is more than made up for his bad patch in Test cricket with a very good 2018-19.

"It was a matter of time and I have been scoring runs regularly. There was a phase where I didn't score too many runs in Test cricket. 2018 and (first part of) 2019 has been good so far and I would just like to continue from where I have left."

"I was playing some matches for Saurashtra. I played Syed Mushtaq Ali Trophy and scored some runs even there. So things are changing. I am scoring runs even in shorter formats now," he told reporters after scoring 162 at No.3 for MRC 'A' against Crombest RC in a TNCA First Division match in Chennai.

The MRC 'A' team is led by India Test spinner Ravichandran Ashwin, who has played a few matches in the local league this season.

Pujara once again stressed that he never felt any pressure of being compared to the legendary Rahul Dravid.

"When I started my career, I always thought I should not be compared to Rahul bhai since he has scored more than 10,000 runs in Test and even ODI cricket. He (Dravid) has publicly said that let him be the first Cheteswhar Pujara rather than Rahul Dravid."

The MRC 'A' coach M Venkataramana, a former India player, said having Pujara in the team was a good one as it provided him a great experience to handle a high-profile player.

"It is a great experience to handle such a high profile player. To have Ashwin along with him, it will help budding cricketers in the side."

He also said by interacting with the likes of Pujara and Ashwin, the young cricketers will learn a lot and would also get new ideas from the experienced stars.

"Being around with international cricketers like Pujara and Ashwin will help the players in the team as they will offer new ideas. The youngsters can gain a lot by watch the big stars prepare for the game and imbibe new things," he added. 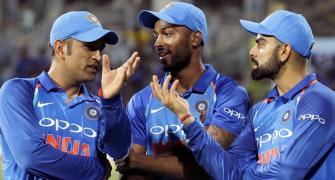 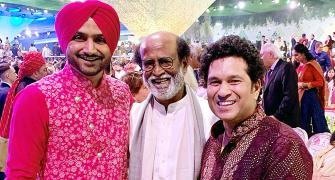 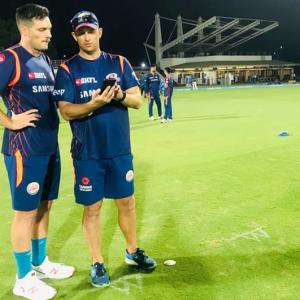