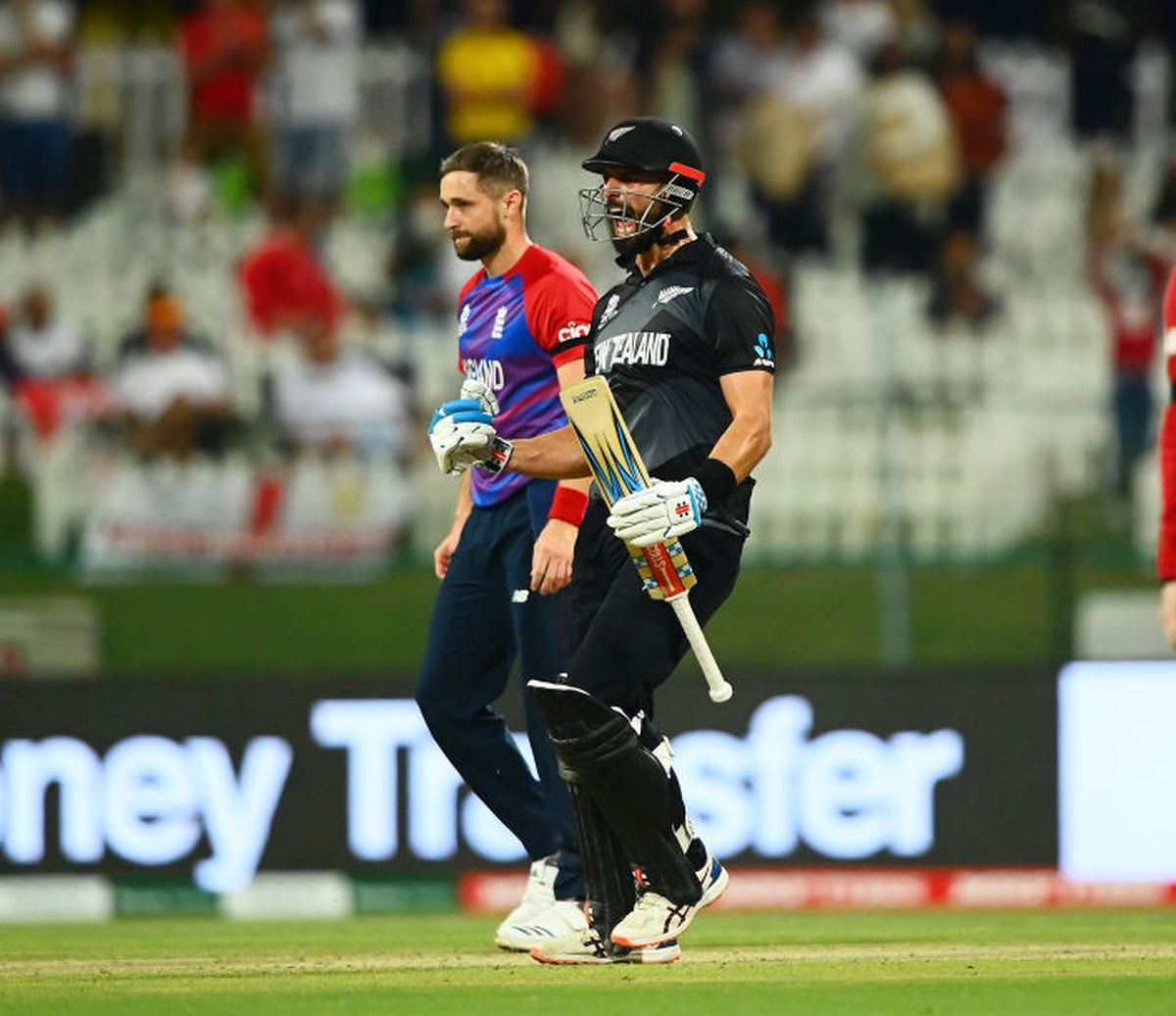 Daryl Mitchell and Matthew Wade were the heroes for their respective teams as New Zealand and Australia set up a Trans-Tasman final in the T20 World Cup.

While New Zealand stunned Group A table toppers England by five wickets, Australia did likewise, by the same margin, against Group B toppers Pakistan in the semi-finals. It was surprising that England and Pakistan caved in from a position of strength to two unheralded performers.

Michell led the charge for New Zealand, hitting England's bowlers to all corners in the death overs. His unbeaten 72 off 47 balls, which included 4 fours and as many sixes, enabled the Kiwis chase down 167 in the first semi-final from what looked a hopeless position at one stage. 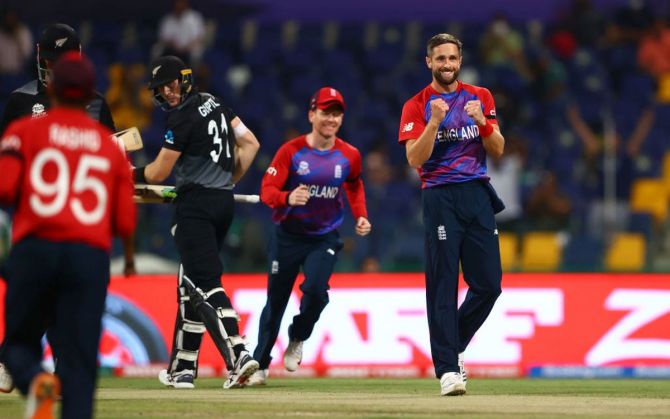 After England pacer Chris Woakes pegged back New Zealand in the Powerplay in a stiff chase, it was necessary for the Kiwis to stitch a good partnership. Mitchell and Devon Conway put on 82 for the third wicket before James Neesham's blitz put New Zealand on top.

The Kiwis needed 109 off the last ten overs. With the required rate steadily climbing, they needed a big finish. Jimmy Neesham got 27 off just 11 deliveries to change the course of the proceedings. 19 of the batter's runs came off Chris Jordan's pivotal 16th over, which went for 23 runs. That charge set up a tense finish.

Mitchell, who had anchored the innings for long periods, joined the party. He repeatedly went for big shots to race to his half-century and finish with a match-winning, unbeaten 72 from 47. 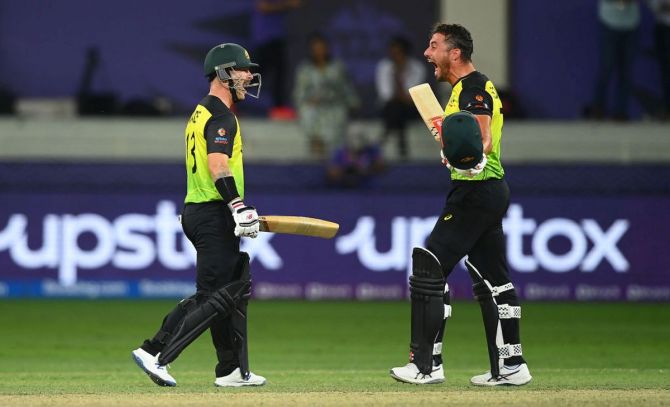 IMAGE: Matthew Wade hit three sixes in the penultimate over to guide Australia into the final. Photograph: Alex Davidson/Getty Images

A similar drama unfolded in the second semi-final when unbeaten Pakistan and Australia locked horns in Dubai the next day.

Pakistan seemed to have done enough after putting up an imposing 176 for 4, with opener Mohammad Rizwan scoring 67 and Fakhar Zaman an unbeaten 55 off 32 balls, after being put in to bat.

Marcus Stoinis and Wade did a Mitchell-Neesham with unbeaten knocks of 40 and 41 respectively, in a late assault after David Warner's fiery 49 set the chase up, to take the Aussies past fancied Pakistan. 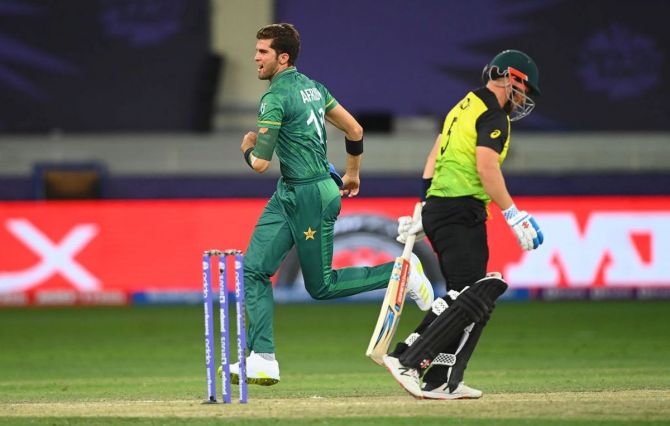 Chasing 177 for a berth in the final, Australia were on the backfoot after Shaheen Shah Afridi dismissed Aaron Finch for a first ball duck with the third delivery of the first over.

But Wade blazed his way with an unbeaten 17-ball effort. With Australia needing 62 off 30 balls, he smashed three consecutive sixes off Afridi in the penultimate over to pull off an unbelievable victory.

Summing up his fine showing, Wade said he was happy that he got the opportunity to 'reinvent myself'.

Australia will now be counting on the Tasmanian for an encore in Sunday's final. 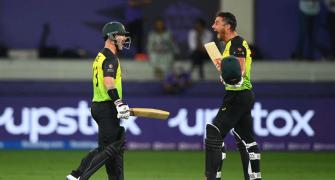 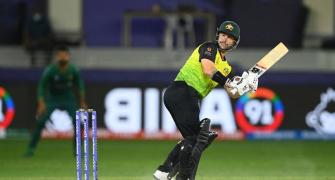 When Wade thought this could be his last opportunity 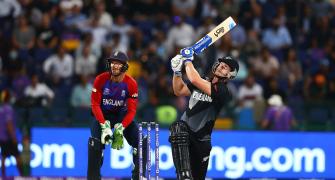 'We've got his eyes firmly set on the T20 WC final' 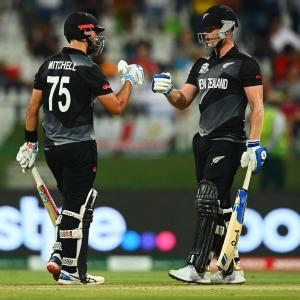 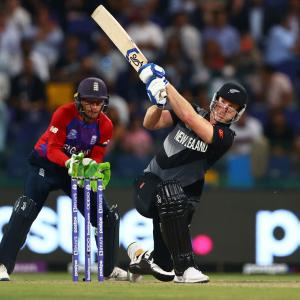