'The new team at BCCI... hopefully we can work well.' 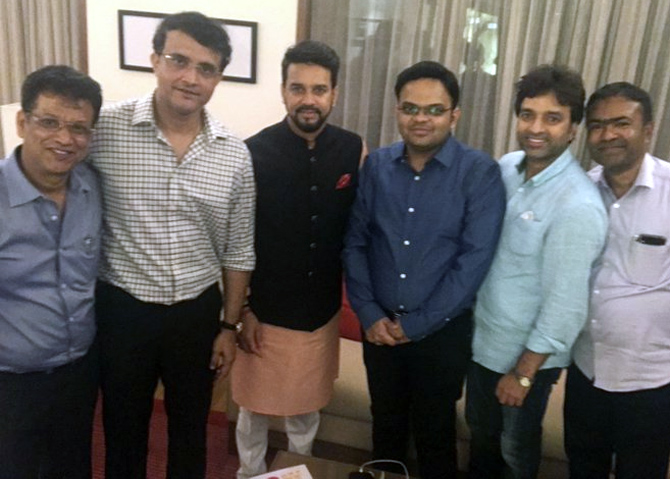 Former India captain Sourav Ganguly is set to take charge as the president of the Board of Control for Cricket in India this month, completing his transition from star player to a top administrator.

"The new team at BCCI... hopefully we can work well .. anurag thakur thank you for seeing this through," he tweeted late on Monday night, flanked by his new team.

Jayesh George, who was the former secretary of Ernakulam district cricket association, is expected to take over as the BCCI joint secretary.

Arun Singh Dhumal, the brother of former BCCI president Anurag Thakur, is touted to take over as the BCCI treasurer and Mahim Verma is set for the vice-president's post.

Veteran administrator Brijesh Patel, who was pipped to the BCCI president's post by Ganguly, is expected to take over as the IPL chairman. Karnataka's Patel played 21 Tests and 10 ODIs between 1974 and 1979 and has held various positions in BCCI and Karnataka State Cricket Association.

Ganguly, who played 113 Tests and 311 one-day internationals and led India to 21 Test wins, has already been the president of the Cricket Association of Bengal.

The former India captain would be at helm for a mere nine months but he said it's a great opportunity to do 'something good'.