Kohli is the most important man in Indian cricket: Ganguly

'Virat is a very big player; see his game in the last four to five years. He has taken Indian cricket to a different level. We are with him and we will remain with him. We will give him everything for his team to be the best.' 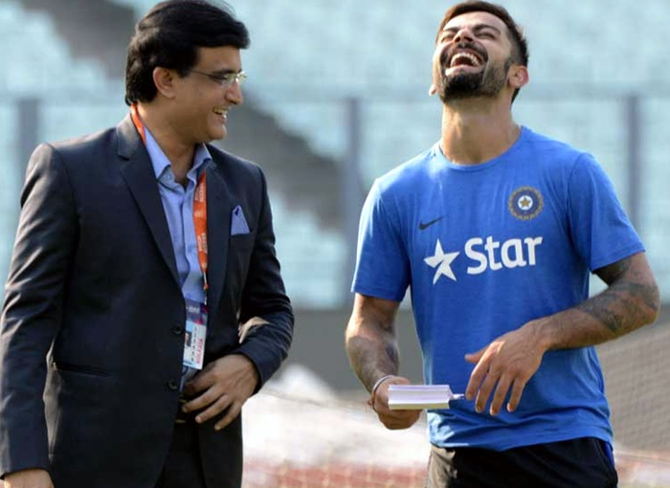 Newly-elected president Sourav Ganguly said the Board of Control for Cricket in India will do everything possible to support current India skipper Virat Kohli and his team.

"He is the most important man in Indian cricket, as captain of the Indian team. We will have a word with him and we will support in every possible way. He wants to make this team the best in the world," Ganguly said, in Mumbai on Thursday, after taking over the top job in Indian cricket.

Ganguly disclosed that he would be meeting with Kohli on Thursday and will discuss the latter's recent suggestion of having only five permanent Test centres in India.

"I will speak to him tomorrow; he is the captain of India. In terms of the Test venues, we have a lot of states, a lot of venues, so we will have to sit with him and see what he wants and take it forward from there."

Ganguly was one of India's most successful captain, having led India in 49 Tests and 146 One-Day Internationals. He said as skipper he enjoyed a good relationship with the late Jagmohan Dalmiya when he was in charge of the BCCI and he will look to follow a similar template with Kohli.

On suggestions whether the team management, comprising Kohli and coach Ravi Shastri, became more powerful during the tenure of the Committee of Administrators in the last 33 months, Ganguly replied: "I really don't know what transpired with COA, Virat and Ravi. Obviously, the new body has taken over, the new office-bearers have taken over and everything will be mutually discussed and taken forward. But rest assured that we are there to make their life easier and not make their life difficult and everything will be on basis of their performance. Performance is the most important thing and that is what will decide the future of Indian cricket."

Ganguly also called upon Mahendra Singh Dhoni to take a cue from his career, when he also made a comeback to the Indian team from a position of no-hope following the Greg Chappell era.

"It depends on him (Dhoni). Even when I was left out and when the entire world said he will never make it, I believed in myself and came back and played for four years. Champions don't finish quickly. I don't know what is in his mind, what he thinks about his career. We will leave at that. He is one of the greats of the game. Over a period of time his achievements, when you sit down and take note, you say wow. So, when I am around, everybody will be respected."

"I haven't spoken to him yet. I have just taken over today. Hopefully we will meet soon and have a word with one of the greats of Indian cricket."