Sourav Ganguly was elected unopposed as BCCI chief on Wednesday, which turned out to be a busy one for him at the head office, reports Harish Kotian/Rediff.com 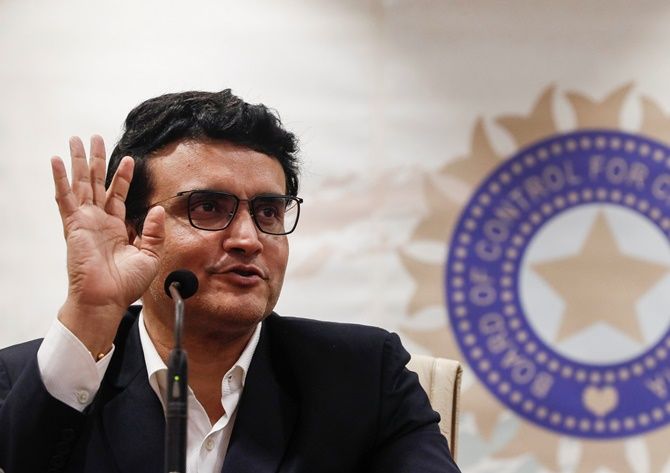 A new era kicked-off in Indian cricket on Wednesday!

Sourav Ganguly, one of India's most successful captains, began his task of getting the game's administration in the country back on track.

The Committee of Administrators (CoA) was in charge of running the daily affairs the Board of Control for Cricket in India since January 2017 after the previous office-bearers were asked to step down by the Supreme Court. After a long wait of 33 months, the CoA was finally able to successfully conduct the board's elections at its General Body Meeting, in Mumbai, which saw Ganguly being elected unopposed.

Only the second India captain to take charge as BCCI chief, Ganguly sounded a pleased man on his first day in office at the BCCI headquarters in Mumbai on Wednesday. In fact, he wore the same blazer that he donned when he became India captain, which, in his words, was a 'bit loose' now.

"It has been good. It has been a lot peaceful. Obviously, once the elections are done, once the nominations are settled, it becomes a lot easier. It is the first day, I sat on my chair, where some stalwarts have sat. I did the same thing when I was the captain. I was given the India captain's blazer, there were some great names that led before me and it is the same thing here. I have a role to do and I will do it to the best of my abilities," he added.

It turned out to be a busy opening day for Ganguly at the BCCI's head office as he immediately immersed himself into meeting with the current professional managers, like the BCCI CEO, CFO, and understanding the functioning of the Indian cricket board.

"We had a meeting. We sat with the staff, with the CEO, CFO... getting the update of what happened in the last three years. In terms of domestic cricket, the fixtures, (BCCI General Manager) Saba (Karim) was here. Financial issues of the Board, expenses incurred; so all these discussions have gone on and it will go ahead after this meeting. And then we will sit and take notice of it. We will then decide how we can make it better in the future. So that's the way we are going to do it. As I said, we are here to accommodate and make sure, most importantly, the cricketers are at ease to play the game, whether it is first-class cricket, Test cricket, women's cricket or the IPL. The biggest goal we have is to make their life lot more easier with performance," he said.

The 47-year-old said his immediate task is restructuring domestic cricket and making it more meaningful, especially with a lot more teams being added to the domestic cricket in the last couple of years.

"That will be the first thing we will do. And we will get it done before the actual Ranji Trophy season starts. The structures are there, the tournaments are there, and there are a lot more teams now. In the last three years the matches have doubled actually. When I played for Bengal and some of my colleagues played for the other states, there were about a 1000 games to be looked at; now there are 2000 games with new states, new affiliations. So we will have to account for it; it has already been accounted for this season. We will have to make sure that the best tournament in the country is competitive and it remains important to everyone because that is where you get the Kohlis, the Dhonis, the Rahanes, the Rohits of India and that structure has to be at its best, both structure-wise and financially... and that will happen. That will be the first thing that will be done by the Apex Council... to make sure that the first class players are looked after."

Ganguly believes it is a good thing that the Lodha reforms have brought more former cricketers into the mix as far as Indian cricket administration is concerned.

"It is a great thing. Imagine Mohammad Azharuddin and Anshuman Gaekwad in the same room. I have been there for 4-5 years now. We have Niranjan Shah's son Jaydev, who has been a consistent first class cricketer. We miss Roger Binny and we hope he will be here at some stage. With time, cricketers will come into the system and I think it is a great mix... with cricketers and administrators that balance. Both can complement each other and cricket being the reason why this institution and this building is. Cricketers are a very important part of this organisation."

Three state associations -- Tamil Nadu, Haryana and Maharashtra -- were barred from the BCCI election because of non-compliance with the Lodha reforms by the CoA, which demitted office on Wednesday. However, Ganguly said the plan is to keep everyone together and he will get the three state associations to comply with the reforms at the earliest.

Ganguly said the low attendance for Test matches in India needs to be looked into. He believes that the facilities at stadiums are not be blamed for as IPL matches at same venues are totally full and hinted that some changes need to be worked upon to make Test cricket more attractive for fans.

"The same fans turn out for the IPL, where the stadiums are choc-a-bloc. So it’s a bit more than stadiums. Test cricket needs a revisit and how it can be popularised. Eden Gardens is going to host Bangladesh on November 22 and we don’t know what’s going to happen in that Test match. But you see an IPL game, people go (crazy). It’s the same stadium, same facilities. People come in huge numbers. The problem is somewhere else; at the same time the structure has to be done. If you look at some of the stadiums, they are remarkable. If you look at Hyderabad, Nagpur, the new stadium in Bombay, Ranchi -- they have fantastic facilities. That part needs to be looked at, but the game under consideration needs to be looked at too," he added.

The Ganguly-led BCCI could also soon be engaged in a battle with the International Cricket Council over the proposed Future Tours Programme. But the former India skipper believes in working with the world governing body to get issues resolved rather than taking it on.

"India are supposed to get $372 million from the ICC in a five-year cycle, which is a lot heavy at the back-end because there are two World tournaments. There is the T20 World Cup in Australia in 2020 and then they come to India with the Champions Trophy (in 2021) and then the World Cup (2023).

"So a lot of the ICC money is the back-end money. Till now we have got whatever it is, but we will make sure we get our due. We will work with the ICC and take this forward." 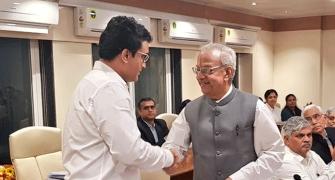 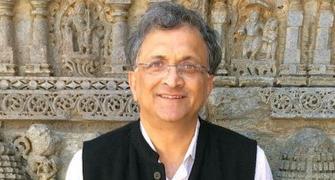 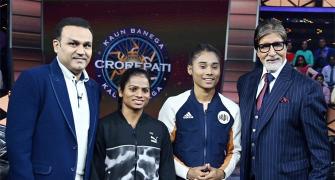 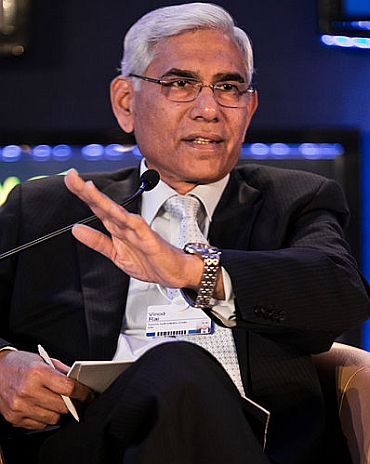