The match was over as a contest after Jharkhand scored a mammoth 880 in their first innings – the tournament's fourth highest score on an Eden Gardens belter against a Nagaland attack in which five out of seven bowlers were hit for a not-so-pleasing "hundred".

IMAGE: Jharkhand's Kumar Kushagra plays a shot en route his 89 in the 2nd innings during the Ranji Trophy pre-quarterfinal against Nagaland at Eden Garden, in Kolkata, on Wednesday. Photograph: Swapan Mahapatra/PTI

Jharkhand butchered north-eastern minnows Nagaland in one of the most farcical and lopsided pre-quarterfinals of the Ranji Trophy with a jaw-dropping overall lead of 1008 runs, the highest ever in the history of the national first-class championship.

The eastern India state, best known for producing India’s famous captain Mahendra Singh Dhoni, didn't break a single rule but effectively made a mockery of the 'Spirit of Cricket' by basically humiliating the opposition for five days before umpires called time on such a sham.

The game was also an indicator of how Supreme Court appointed Justice RM Lodha committee and subsequently the CoA, led by former CAG Vinod Rai, didn't understand the gulf between a proper first-class team and a developmental side from a region where cricket isn't the primary sport.

The match was over as a contest after Jharkhand scored a mammoth 880 in their first innings – the tournament's fourth highest score on an Eden Gardens belter against a Nagaland attack in which five out of seven bowlers were hit for a not-so-pleasing "hundred".

Nagaland, in reply, were all-out for 289 and the 591-run first innings lead had effectively ended the game in Jharkhand's favour.

However, the rules suggested that one needed to play till the end of the fifth day unless Jharkhand wanted to enforce follow-on.

To be fair to Jharkhand, their bowlers had bowled for 103.3 overs and hence they batted again and this time for fun of it sent their tailender Anukul Roy to join what was a "batting fest".

Anukul, who had been a long time Mumbai Indians reserve, helped himself to a 153 in Jharkhand's second innings score of 417 for 6 when umpires Ganesh Charhate and Manish Jain asked players to shake hands.

Jharkhand won the match to qualify for the quarter-finals but cricket lost on the day because of a team making use of loopholes of regulations where matches become dead contests after one team takes the first innings lead.

This match became even more unbearable because a Ranji Trophy knock-out isn't four day but a five-day affair.

"Our motive was never to go for records. Otherwise, the likes of Virat Singh, Saurabh Tiwary would have batted. Three-point was enough to seal a quarter-final berth. The wicket was very flat, so we gave the part-time batters a go out there and express themselves," he told PTI.

"Our bowlers had to slog in the league round matches as most of our matches went till the final day. The temperature has also soared in the past few days in this part and we did not want to add to the workload of our bowlers who have been in the bubble for a long time now," his explanation defied logic.

CAB pitch curator Sujan Mukherjee had defended the track stating that it's the inept bowling and shoddy fielding by Nagaland, who dropped more than 10 catches during Jharkhand's first innings, which is to be blamed.

It's true that Nagaland players like Chopise Hopongkyu, Rongsen Jonathan, Khrevietso Kense, Imliwati Lemtur were hammered but is it their fault that they are simply not ready for rigours of elite first-class cricket, which is of very high standard for a team that's entered the fray only few years back?

Outstation recruits like Bengal's Raja Swarnkar, who is not even an A grade club level bowler in Bengal or the mediocre ones like Shrikant Mundhe didn't add much value.

The result was a match whose records would just be that -- records without impact. 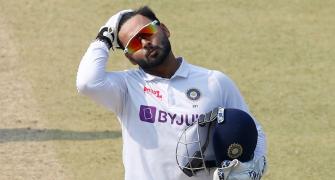 Pant will 'be better than Dhoni' 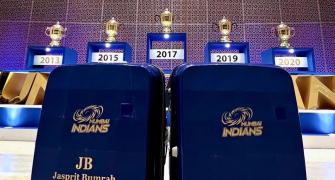 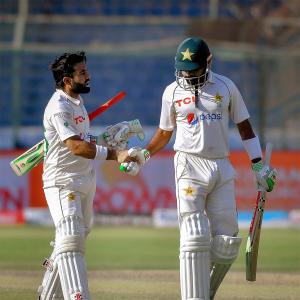 How Pakistan escaped to draw in Karachi