Rajasthan Royals has always been a team that punched above its weight.

Against Delhi Capitals, at the Wankhede Stadium on Thursday, Royals once again showed their fighting spirit as they clinched an unlikely victory.

The match seemed to have gone out of Royals' reach as they slipped to 42/5 after the Delhi Capitals pacers ran through the top order before David Miller brought the innings back on track.

The experienced South African, who came into the team in place of the injured Ben Stokes, faced a tough task first up as he tried to repair the early damage.

He got his first boundary off the fifth ball he faced when he drove a full delivery from compatriot Kagiso Rabada straight down the ground past mid-off.

He did well to keep out Ravichandran Ashwin with some steady batting, taking singles mostly against the experienced off-spinner, looking to build a partnership in the middle overs.

Wickets kept falling at the other end as Shivam Dube (2) and Riyan Parag (2) perished cheaply.

Miller hit pace bowler Avesh Khan for successive boundaries to take Royals past the 50-run mark in the 10th over.

His shot selection was impressive and he made sure he picked the right bowlers to get the boundaries.

Medium pacer Marcus Stoinis started off with a poor over as Miller hit him for three fours in a row.

With Rahul Tewatia (19) falling to Rabada, Miller looked to go on the attack. After going past the half-century mark from 40 balls -- his 10th in the IPL -- Miller targetted Avesh, hitting him for a couple of sixes over the square leg region in the 16th over.

Miller was the first player to hit a six in the game after Delhi Capitals batsmen failed to hit a single maximum even once in their innings.

He perished trying to make it a hat-trick of sixes against Avesh, caught at long-on after a superb 62 from 43 balls, which helped Royals get back into the contest. 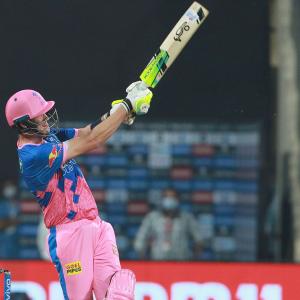 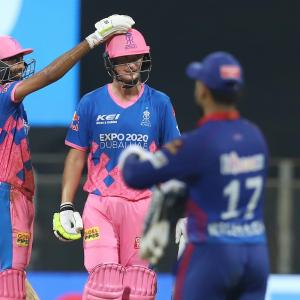