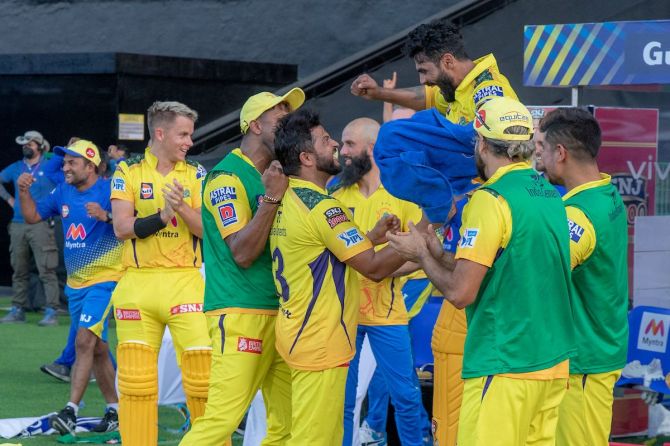 Ravindra Jadeja has been Mr Consistent for Team India in all forms of the game. But when he plays for Chennai Super Kings, he raise his game a fair bit. This season, Jadeja, CSK openers Faf du Plessis and Ruturaj Gaikwad and Moeen Ali have been the reasons for the marked improvement in Chennai's performance.

On Sunday, Jadeja once again showed why he is called a three-dimensional player for his batting, bowling and fielding.

After Kolkata Knight Riders won the toss and elected to bat, CSK struck immediately in the first over removing Shubman Gill, courtesy of a run out.

Venkatesh Iyer and Rahul Tripathi then stitched a 40-run stand for KKR. Just when they looked to take the game away from Chennai, M S Dhoni introduced Jadeja in the sixth over. Where the other CSK bowlers went for above 8 runs an over, Jadeja kept things tight. He was miserly in his three over spell, giving away just 5 runs an over.

In his final over, he removed the well-set Tripathi for 45 finishing with figures of 1-21 from his 4 overs.

While the CSK openers gave the team a great start, Chennai faltered in the middle with the pitch slowing down. When Varun Chakravarty castled Dhoni, the game appeared all but over for CSK.

Requiring 26 off the last two overs, Jadeja took a single off Prasidh Krishna's 19th ofer. Sam Curran kept the flow going with another single. Jadeja took advantage of a short ball from Prasidh, smashing it over long leg.

The next ball he took advantage of a leg side delivery and smashed it for another six. Prasidh tried to go for a wide yorker, but Jadeja turned it into a full toss hitting one through point for another boundary. Jadeja then hit another boundary off Prasidh's final ball to make it 22 runs from the over.

Requiring just 4 runs from the final over, Shardul Thakur equalled the score with a paddle sweep. However, Jadeja couldn't see the game through as he was adjudged LBW off Sunil Narine's bowling. Deepak Chahar got the winning runs with a slog towards midwicket to power Chennai to the top of the table. 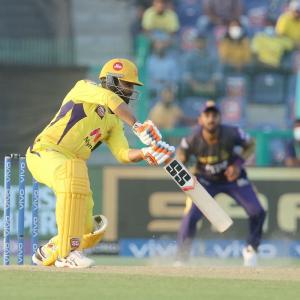 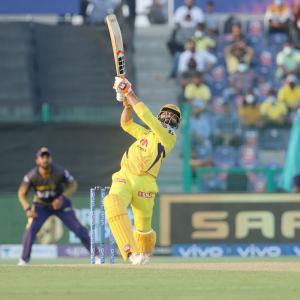