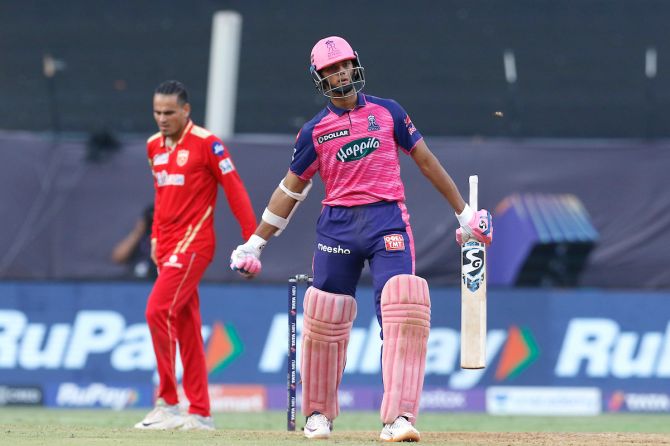 IMAGE: Rajasthan Royals opener Yashasvi Jaiswal celebrates completing a half-century during the IPL match against Punjab Kings in the IPL match at the Wankhede Stadium, in Mumbai, on Saturday. Photograph: BCCI

Rajasthan Royals captain Sanju Samson was effusive in praise of Yashasvi Jaiswal, saying the team knew the opener was due for a long innings.

The 20-year-old batter scored an explosive 41-ball 68, which included 9 fours and 2 sixes, after a three-wicket haul by Yuzvendra Chahal, to steer Rajasthan Royals past Punjab Kings by six wickets in the IPL match at the Wankhede Stadium, in Mumbai, on Saturday and keep their play-off hopes alive.

"We all knew that he (Yashasvi Jaiswal) was due for a good innings. He spends quality time training and practising, spends a lot of hours in the nets. Very happy for him," said Samson, at the post-match presentation.

He added it was a really good wicket and the Royals were happy to chase Punjab Kings’s solid total of 189 for 5.

"Really great intent shown by almost every batsman. I have been learning a lot; things have been getting clearer and clearer. Having the same side for almost every game helps to identify the situation and how to use the longer and shorter side.

"You need to keep on changing the bowlers according to the situation. There is no set strategy that fast bowlers have to bowl at the death. I feel anyone having great temperament and having great experience can do the job for the team.

“He (Yuzvendra Chahal) said he is even ready to bowl the 20th over. He is confident and he is doing well for the team."

Reflecting on his own batting, Samson said he wanted to go out and express himself on the field by playing some shots, adding the team needs to return to the basics and take one game at a time.

"We will keep on giving importance to each and every game and then doing our best in every game. Let us see where we end up at the end of the league stages." 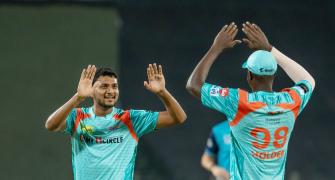 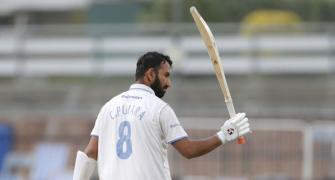