Aaron Finch (64) struck a half century as Pune Warriors notched up their first win of the season with an easy seven-wicket victory over Rajasthan Royals in their Pepsi IPL match on Thursday.

It was Pune's first win in 11 matches.

Chasing a modest 146 for a win, the Warriors overhauled the target with eight balls to spare with Finch playing sheet anchor with a 53-ball 64 at the Subrata Roy Sahara Stadium to give the home side their first win in three matches.

The Warriors romped home easily on the foundation laid by the openers -- Finch and Robin Uthappa (32 off 16 balls) -- who raised 58 runs in just 4.5 overs.

Ross Taylor and Yuvraj Singh, who returned to the side after missing the second match due to a sore back, chipped in with 17 and 28 not out respectively.

Yuvraj took some time to open his account but he ended the contest in style with a six off Sreesanth as the Warriors reached 148 for three in 18.4 overs. Yuvraj's 23-ball knock was studded with two fours and as many sixes. 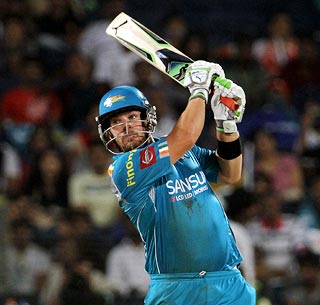 Finch, who hit six fours and three sixes in his knock, and Uthappa destroyed the confidence of the Royals opening bowlers Harmeet Singh and S Sreesanth with a flurry of fours and sixes early on.

Finch hit Sreesanth for a straight six in the third over of the innings and the pacer's first. The home crowd roared into frenzy as left-arm spinner and IPL debutant Harmeet was clobbered for 16 runs with Uthappa hitting two consecutive fours and Finch joining in with a huge six.

Uthappa then launched an amazing attack on Sreesanth with two sixes and a four in the pacer's next over as the Warriors reached 50 in the fourth over itself with the help of four fours and as many sixes.

The opening stand was broken in the fifth over with the Royals captain Rahul Dravid taking a brilliant one-handed catch at short-midwicket to dismiss Uthappa off James Faulkner. Uthappa's 32 came from just 16 balls and was studded with three fours and two sixes.

With the openers having given a rollicking start, the Warriors had the luxury to slow down a bit. Finch and Taylor eschewed risk to take their side to 86 for one at the halfway mark with the asking just six an over.

Taylor waited for long for a big hit before sending a Harmeet Singh delivery to the stands in the 12th over. The young bowler, one of the stars of India's Under-19  World Cup win last year, though had the last laugh as he claimed his maiden IPL wicket by claiming the scalp of Taylor who was out for (17) after sharing 46 runs for the second wicket.

Earlier, Rahul Dravid (54) struck his second half century in three games but the Royals could only post 145 for five after opting to bat.

The Royals had the worst possible start with opener Kushal Perera out LBW first ball off Bhuvneshwar Kumar but Dravid steadied the innings with the other opener Ajinkya Rahane (30 off 27 balls) with a 81-run stand for the second wicket from 11.1 overs.

The Royals, however, failed to capitalise on their skipper's half century as they suffered a batting collapse in the second part of their innings. The visitors lost wickets in quick succession and from 81 for one in the 12th over, they were reduced to 106 for five in the 16th over.

Brad Hodge (22 not out) and James Faulkner (19 not out) recovered some lost ground as they took the Royals to 145 for five with a 39-run unbroken stand for the sixth wicket from 4.1 overs.

After the initial jolt of Perera, Dravid and Rahane went about scoring with ease with at least a four every over.

Dravid hit Angelo Mathews for two fours in the fourth over before Rahane joined with a boundary off Ashok Dinda as the Royals reached 40 for one at the end of the fifth over.

The duo maintained the pressure on the Warriors bowlers with a four each off Mitchell Marsh to take their side to 72 for one at the halfway mark.

Two quick wickets in the form of Rahane and Stuart Binny (1) in the space of eight balls jolted the Royals before Dravid himself was out in the 15th over with Ross Taylor taking a brilliant one-handed catch diving to his left.

Dravid hit eight fours in his 48-ball knock and with his departure at the team score of 93 for four, the Warriors came back into the match. 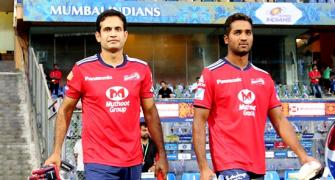 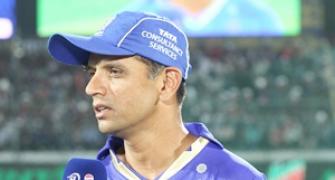 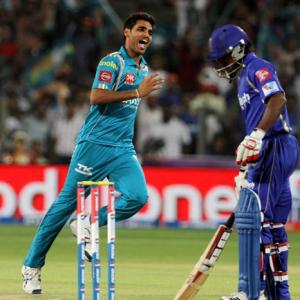 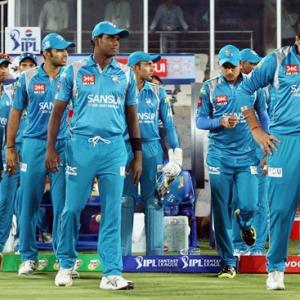