Images from the IPL final between Delhi Capitals and Mumbai Indians, in Dubai on Tuesday. 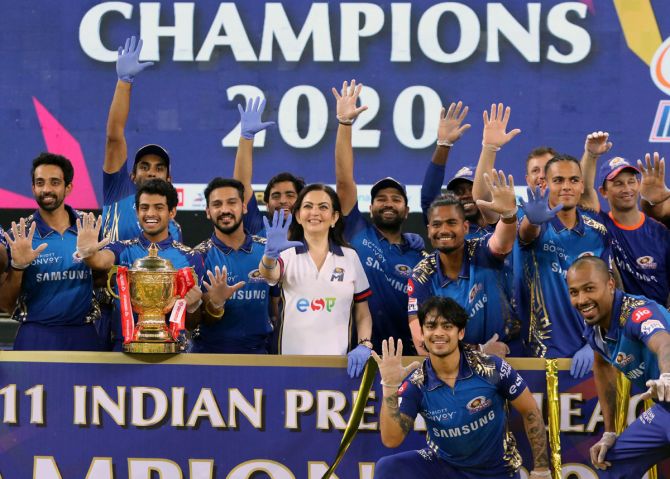 IMAGE: Mumbai Indians celebrate with the trophy after beating Delhi Capitals in the IPL final in Dubai on Tuesday. Photograph: BCCI/IPL

Mumbai Indians won the Indian Premier League for a record fifth time after a convincing five-wicket victory over Delhi Capitals in the final of the 13th edition of the T20 extravaganza, in Dubai on Tuesday.

Chasing a modest 157 for victory, the defending champions hit up the required runs with eight balls to spare.

Captain Rohit Sharma led the way, blasting 68 off 51 balls, including five fours and four sixes. He was ably supported by Ishan Kishan, who scored 32 from 18 balls. 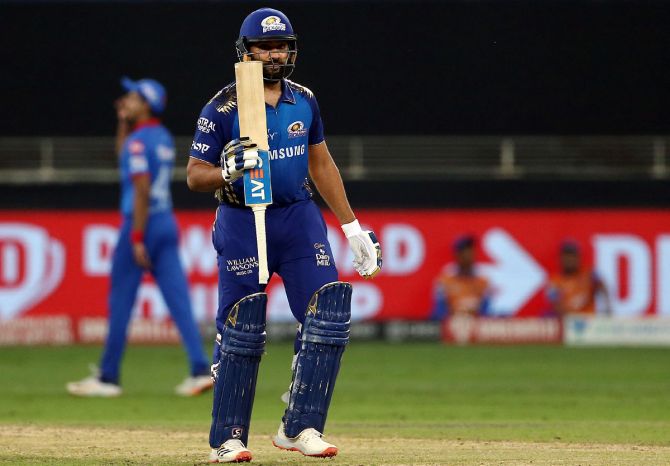 The victory made Mumbai Indians only the second team after Chennai Super Kings to defend their IPL crown.

Earlier, captain Shreyas Iyer and the mercurial Rishabh Pant staged a brilliant fightback with contrasting-yet-stylish fifties as Delhi Capitals recovered from the loss of three early wickets to post 156 for 7. 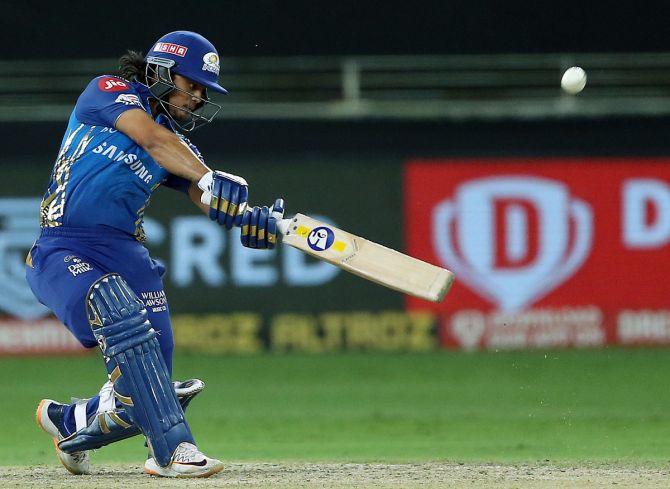 IMAGE: Ishan Kishan hits out during his 18-ball 32. Photograph: BCCI/IPL

Electing to bat, Delhi were off to a disastrous start, with Trent Boult picking up a couple of early wickets before Shreyas Iyer (65) and Rishabh Pant (56) rallied them with a 96-run stand for the fourth wicket. 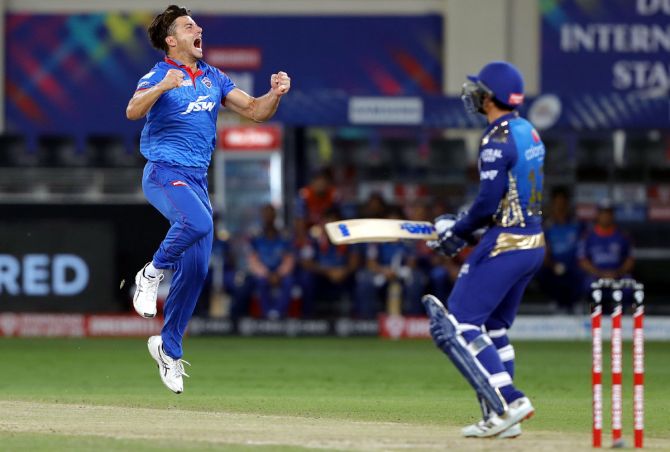 Mumbai Indians, who had beaten Delhi Capitals thrice this season en route to the final, were off to a flier in the run-chase, Quinton de Kock hitting 20 from 12 balls, as he and Rohit put on a brisk stand of 45 runs for the opening wicket off 25 balls.

The only blemish in Rohit's fine knock was a misjudged single in the 11th over that forced Suryakumar Yadav (19), his partner, to sacrifice his wicket for the skipper. Mumbai Indians were reduced to 90 for 2, but it hardly mattered.

Rohit and Kishan then cruised through in a 47-run stand for the third wicket to complete the formalities. 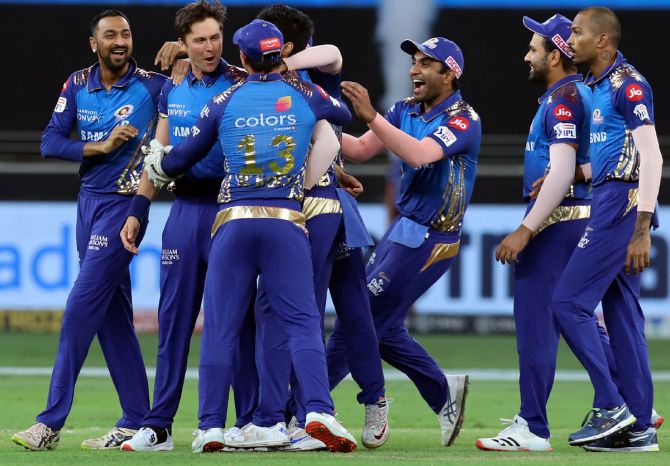 Earlier, Iyer and Pant, the rising stars of Indian cricket, came to the party on the big day, adding 96 runs in 11.3 overs for the fourth wicket, after Trent Boult had Delhi Capitals reeling at 22 for 3 inside the Powerplay. 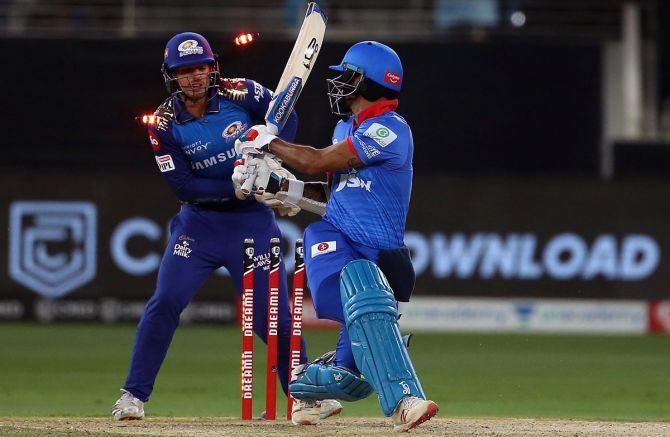 While Iyer displayed conservative shot-selection during his unbeaten 65 off 50 balls, the unconventional, free-flowing Pant was back in his element scoring 56 off 38 balls, his first half-century in 15 innings.

Discarded from India's white ball set-up, he let his bat do the talking on the final day of the tournament, showing the world why he is considered special by smashing four fours and two sixes.

The treatment meted out to Krunal Pandya was that of pure disdain. A straight six, coming down the track, and a slog sweep over cover for another maximum were a treat to watch. 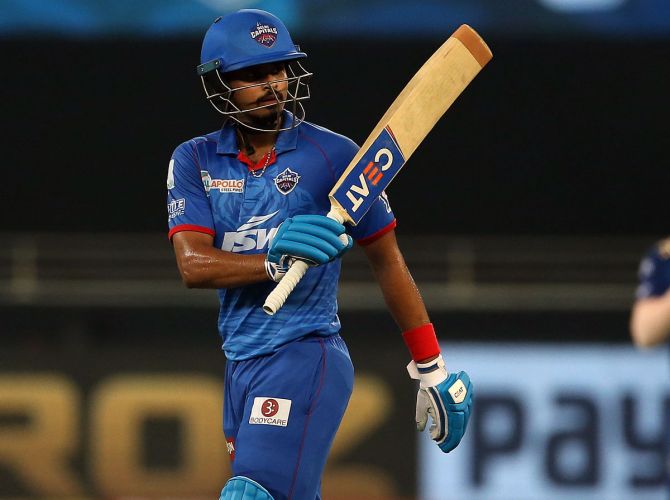 A customary slog off Nathan Coulter-Nile behind square brought about his 50. However, he tried one shot too many and perished.

Skipper Iyer, at the other end, was more classical, hitting two cover driven boundaries off the ever-dangerous Trent Boult (3/30 in 4 overs).

A flick off Coulter-Nile helped him settle down and allowed Pant to go on the offensive at the other end.

Iyer hit six fours and two sixes, but the standout shot was the one for which he made room and hit Jasprit Bumrah (0/28 in 4 overs) over extra-cover for a boundary. IMAGE: Rishabh Pant goes on his knee to send the ball over the ropes. Photograph: BCCI/IPL

The evening, however, started well for Mumbai Indians, with Boult taking charge at the onset, like he did right through the tournament.

The New Zealand pacer's opening spell in the Powerplay was hardly indicative of the groin strain he sustained during the qualifier 1.

The first delivery of the final was a real beauty that kicked up from the length and started growing bigger on Marcus Stoinis, who was forced to edge it to Quinton de Kock behind the stumps. 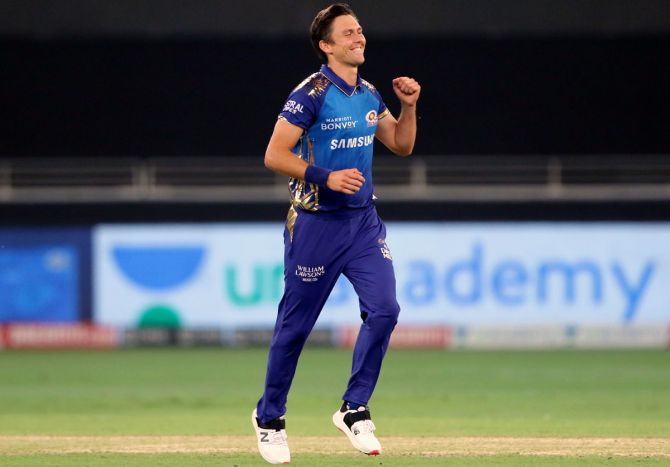 Ajinkya Rahane was his second victim, dismissed after a lousy stroke to an in-swinging delivery on the pads. The intended flick was taken behind by de Kock.

Dhawan (15) started with a flick and had two more boundaries before a needless slog sweep against the turn off Jayant Yadav brought about his downfall.

At 22 for 3, Pant and Iyer joined hands just like the first game and the script was certainly different. 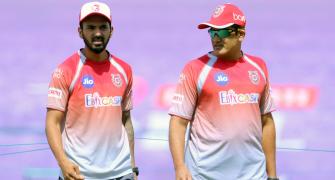 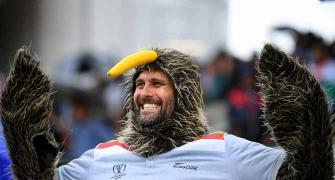 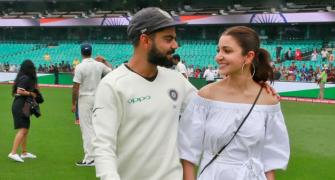 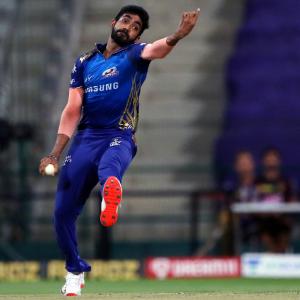 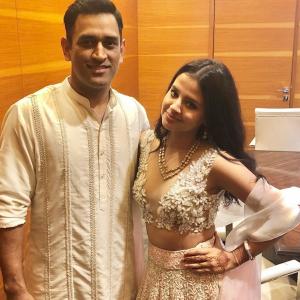