Images from the IPL match between Chennai Super Kings and Mumbai Indians, in Dubai, on Sunday. Ruturaj Gaikwad excelled with bat, and Dwayne Bravo with ball, as Chennai Super Kings fought back from a precarious position to trounce Mumbai Indians by 20 runs in the opening match of the second phase of the Indian Premier League, in Dubai, on Sunday.

Gaikwad scored an unbeaten 58-ball 88 before the West Indian chipped in with some useful runs at the end and took vital wickets to rally the Super Kings from a hopeless position. Gaikwad batted through the innings to lift Chennai Super Kings from a precarious 7 for 3 to 156 for 6.

Bravo then scored 23 off 8 balls as CSK recovered to put up a fighting total. Chasing 157 on a pitch that saw the ball often stop on the batsmen, Mumbai Indians were off to a poor start and reduced to 37 for 3 by the sixth over.

Both Quinton de Kock (17) and debutant Anmolpreet Singh (16) were out after getting starts, pacer Deepak Chahar accounting for the two openers. Suryakumar Yadav and Ishan Kishan too were back in the dugout in quick succession, leaving Mumbai in a spot of bother at 58 for 4 in the 10th over.

Saurabh Tiwary (50 not out) and stand-in skipper Kieron Pollard forged a partnership before Josh Hazlewood had the big-hitting all-rounder from Trinidad trapped in front of the wicket. Tiwary and Adam Milne tried to revive the sagging innings but could not, the latter getting out to the experienced Bravo off the second ball of the 20th over.

Bravo finished with three wickets for 25 runs and Chahar had 2 for 19 as Mumbai’s challenge ended at 136 for 8. Earlier, the supremely-talented Ruturaj Gaikwad batted through the innings, scoring an unbeaten 58-ball 88, as Chennai Super Kings recovered from 7 for 3 to put up a fighting 156 for 6.

Dwayne Bravo (23 off 8 balls) provided a late spark to enable the Super Kings put up a fighting total.

The 24-year-old Gaikwad added 81 runs for the fifth wicket with Ravindra Jadeja (26) to steady the ship after the loss of skipper Mahendra Singh Dhoni in the sixth over, with the score reading 24 for 4. CSK lost four wickets in the powerplay overs, including those of skipper Dhoni and the team's seasoned run-getter Suresh Raina, as three top-order batsmen failed to open their account.

Former champions Chennai had an inauspicious start as Trent Boult dismissed Faf du Plessis off the fifth delivery of the first over. The New Zealand pace spearhead had the veteran South African caught by backward point fielder Adam Milne, who was standing very fine, after the batsman shaped himself up to play the cut shot.

One for one became two for two in the next over, as Milne got Moeen Ali, who slapped a slightly short ball straight to Saurabh Tiwary at cover. The England all-rounder was all at sea as the ball seemed to stop when he went for his shot.

More trouble was in store for CSK when the three-time winners lost the big wicket of Raina in the third over. The experienced left-handed batsman, who has helped the team win so many matches in the past, was out to an irresponsible shot, miscuing one while trying to attack Boult. Meanwhile, Ambati Rayudu retired hurt after taking a blow on his hand to make matter worse for the Super Kings.

If that was not enough, holders Mumbai Indians piled more misery on CSK by sending veteran Dhoni back to the hut for a poor score. IMAGE: Quinton de Kock fails to hold on to a catch from Ruturaj Gaikwad. Photograph: BCCI

The World Cup-winning Indian captain timed his shot well but, to his misfortune, Boult completed a well-judged catch at deep square leg, capping a forgettable powerplay for CSK.

After that, Gaikwad and Jadeja put together invaluable runs by mixing caution with aggression to give the team a total to defend against a side that was missing two of their big players, regular skipper Rohit Sharma and all-rounder Hardik Pandya. 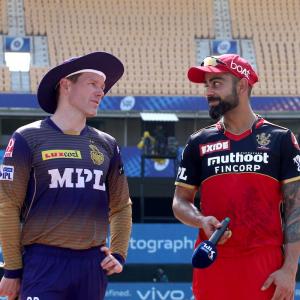