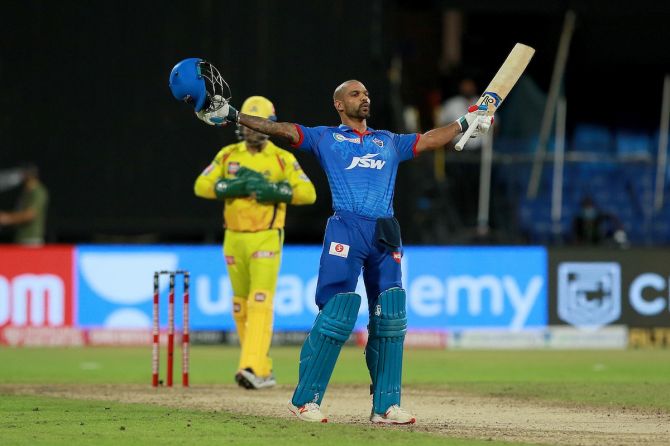 Shikhar Dhawan did the star turn, scoring a hundred, as Delhi Capitals got the better of Chennai Super Kings in the Indian Premier League match, in Sharjah, on Saturday.

Spared by the fielders a number of times, the dashing opener made the best of those ‘lives’ to score an unbeaten 101, his maiden IPL hundred, and give Delhi Capitals a five-wicket victory with a ball to spare.

He was well-supported at the death by Axar Patel, who slammed three sixes in the final over. IMAGE: Axar Patel sends one of the three sixes he hit into the stands. Photograph: BCCI/IPL

Dropped on 25 and 79, apart from surviving a half chance and a run-out opportunity, Dhawan made full use of the lives given to him to raise his best IPL knock as the Capitals overhauled a stiff 180-run target.

On 99, Dhawan also had a caught-behind decision reversed, using DRS.

Despite a well-set Dhawan at the crease, Sam Curran bowled an exceptional 19th over, giving away just four runs to keep Chennai Super Kings in the hunt. Capitals needed 17 runs off the final over and it looked like Dhawan's effort would go in vain, but Axar played a blinder of a knock, hitting three sixes off Ravindra Jadeja to finish the game in style.

Dhawan’s unbeaten 58 balls knock was studded with 14 hits to the fence and one over it. 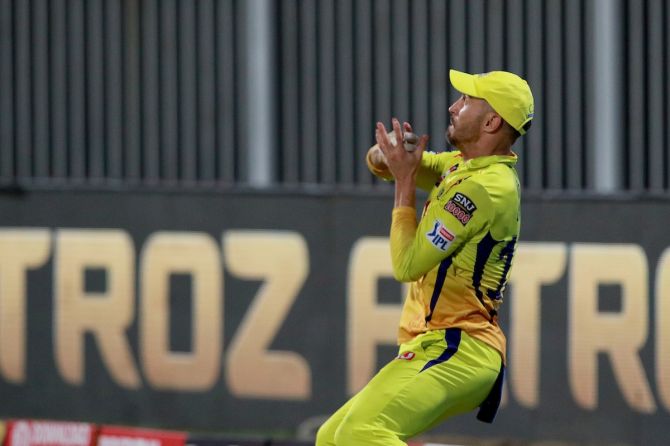 After Chennai Super Kings pacer Deepak Chahar, who was as usual very impressive, sent back Prithvi Shaw (0) and Ajinkya Rahane (8) inside the first five overs, Dhawan kept one end safe.

Skipper Shreyas Iyer (23), who hurt his shoulder in the previous game was not his usual aggressive self. The fluency with which he times the ball was missing.

His 68-run stand with Dhawan ended when he holed one out to Du Plessis off Dwayne Bravo. It was a slower delivery which Iyer could have dispatched easily into the empty stands on any other day.

Marcus Stoinis added 24 quick runs before being dismissed, leaving Dhawan to take the fight to the wire. IMAGE: Chennai Super Kings opener Faf du Plessis pulls one to the boundary during his 58 off 47 balls during the IPL match against Delhi Capitals, in Sharjah, on Saturday. Photograph: BCCI/IPL

Earlier, Faf Du Plessis hit his fourth half-century of the season before Ambati Rayudu produced another useful cameo as a collective batting effort propelled Chennai Super Kings to 179 for 4.

Du Plessis (58) added 87 runs with Shane Watson (36) after early fall of Sam Curran (0), setting it up nicely for the former champions.

Rayudu hit 45 off 25 balls while Ravindra Jadeja hit four sixes in his fiery 33-run knock as the Super Kings amassed runs in the last three overs. One of Jadeja's sixes landed on the road outside the stadium. Rayudu and Jadeja added 50 runs in 3.3 overs during their unbeaten fifth-wicket partnership.

While Watson relied on safe ground-strokes considering the sluggish track Du Plessis did not hesitate to improvise, playing a lot of scoop shots. He pulled the short ones with ease. Young pacer Tushar Deshpande bowled a tight line with decent speed and was rewarded when Curran, without assessing the bowler, swung his arms but got a top-edge that was taken by Anrich Nortje (2/44).

The ball was stopping a bit on the slow Sharjah wicket but after four quiet overs, Du Plessis creamed off 14 runs from Nortje's first over, hitting his compatriot for a six and two fours.

Watson, using his experience, got some quick runs by placing the ball instead of going after the bowlers. The Australian’s handling of the pacers and spinners was sensible as he kept the scoreboard moving. Du Plessis completed his fifty with a single of Nortje but Watson was castled by the South African in the next ball.

The Capitals batsmen did not let off-spinner Ravichandran Ashwin take advantage of the slow surface, taking easy runs off him.

Rabada sent back Du Plessis while Nortje got rid of rival skipper Mahendra Singh Dhoni (3) but Rayudu and Jadeja helped the side post a competitive total. 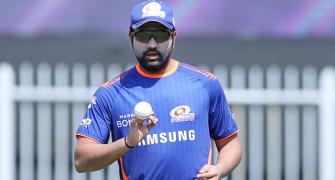 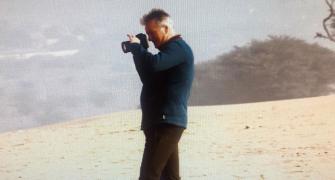 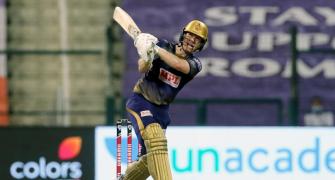 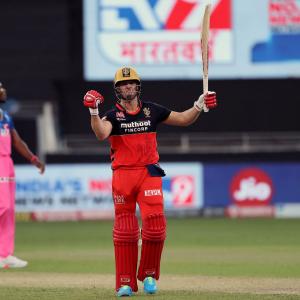 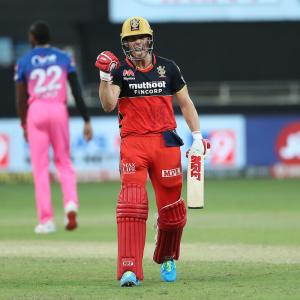