Kolkata Knight Riders prevailed in their prestige fight against Pune Warriors, defeating the Sourav Ganguly-led side by seven runs in a thrilling Indian Premier League match in Kolkata.

Gautam Gambhir and his boys held their nerves as Pune batting again faltered at the death to slump to their fifth consecutive defeat.

Chasing 151 for win, Kolkata restricted Pune to 143 for eight with Ganguly emerging as the top-scorer with 36 off 35 balls during which he hit four boundaries and a lone six.

Angelo Mathews (35) gave Ganguly good support from the other end as the duo stitched 73 runs for the sixth wicket to keep Pune in the hunt.

Earlier, Kolkata frittered away a rollicking start as Pune Warriors hit back in the last 10 overs to restrict the hosts to 150 for five at a jam-packed Eden Gardens.

Opting to bat, Kolkata skipper Gautam Gambhir (55) played yet another captain's knock with his third consecutive half-century and together with Brendon McCullum (42) added 113 runs, their highest opening stand of the season.

The match lived up to its hype as fortunes kept on fluctuating till the last over when the asking rate got too high with 18 runs required off six deliveries.

Kolkata had the Warriors reeling at 55 for five at one stage before Ganguly and Mathews' 73-run sixth wicket partnership, which came off just 56 balls, turned the match in the visitors favour.

Mathews hit Yusuf Pathan for three consecutive sixes to score 19 runs off the 15th over and put Pune in sight of a victory as the equation was reduced to 42 from 30 balls. 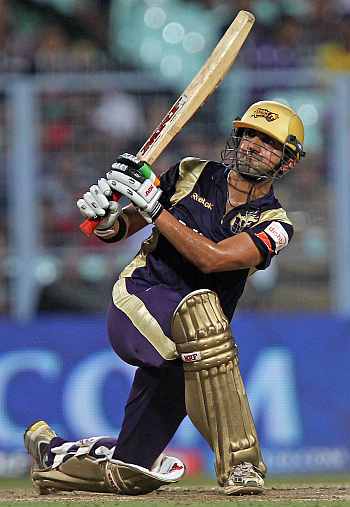 But Ganguly's dismissal soon after he hit a six over long on off Rajat Bhatia in the 18th over swung the match in Pune's favour.

With 12 needed from last three balls, Mathews perished in search of a big one, brilliantly caught by Laxmi Ratan Shukla at long on to virtually pocket the match for Kolkata.

Reduced to 45/2 in the power play, Pune found themselves in desperate need of a partnership when Iqbal Abdulla and Jacques Kallis ensured further slide for Ganguly's men as Pune recorded yet another top-order failure.

Talented Steven Smith looked in fine nick during his 16-ball 14-run knock before a dubious lbw decision by Shavir Tarapore brought an end to his stay at the crease.

The dismissal ended the spectators anxious wait to witness Ganguly bat as the city's heartthrob made a dramatic entry at number seven position with his team tottering at 55 for five in 8.2 overs.

Narine troubled Ganguly with his mysterious off-spin in the wicket maiden over but the former India skipper broke the shackles in the next over with two consecutive boundaries of Kallis.

Ganguly kept the momentum going, unsettling Narine in the next over forcing KKR to take the West Indies spinner out of the attack.

Kolkata were going steady till Mathews exploded in the 15th over, smashing Pathan for 19 runs. But it was not to be Pune's day as they fell eventually short of the target.

Earlier, Pune were under the pump when Gambhir and McCullum were batting but once left-hander fell to Murali Karthik and McCullum became a victim of Sri Lankan paceman Mathews, complexion of the match changed.

In the first half of the Kolkata innings, erratic bowling by Pune -- they leaked nine wides inside the powerplay  helped the cause of the hosts as they raced to 68 for no loss in the first six overs.

Gambhir made his intention clear in the very second ball, pulling Karthik over fine-leg for a boundary and hooked Dinda's bouncer attempt over midwicket in the next over.

Gambhir then smashed Ashok Dinda for a six and a four to collect 19 runs from his over.

The pressure was clearly palpable in the Warriors camp as Dinda dropped an easy sitter, giving McCullum a reprieve on 28 as KKR opening duo bettered their previous best -- 95 against Royal Challengers Bangalore.

Gambhir completed his third consecutive half-century, and fourth overall in the ongoing IPL, with an elegant push off Wayne Parnell to the fine leg.

With Gambhir leading from the front, yet again, Kolkata progressed at 10 run-rate as Ganguly's hapless bowlers found it difficult to break the partnership.

Kartik gave the much-needed breakthrough for Pune taking the dangerman Gambhir when he stepped out only to find Mithun Manhas at long off.

Just when it was going out of control, Mathews brought respite to Ganguly's camp when he raced through his amazing spell of 4-0-17-2, taking the prized scalps of McCullum and Kallis (1).

Struggling Pathan and Debabrata Das found the going tough in the death overs as Pune made a strong comeback.