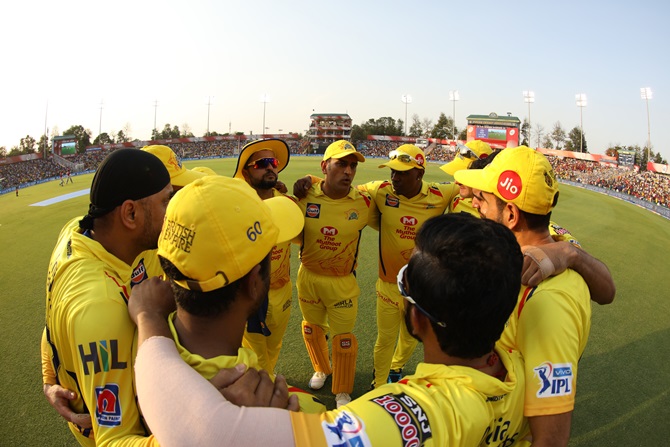 IMAGE: Chennai Super Kings players get into a huddle before going out to field against Kings XI Punjab in Sunday's IPL match in Mohali. Photograph: BCCI

Mahendra Singh Dhoni's aim was to take the game against Kings XI Punjab deep and ensure a top-two finish for defending champions Chennai Super Kings once he realised that Lokesh Rahul’s blitzkrieg has sealed the deal for the home team, in Mohali, on Sunday.

Kings XI Punjab beat Chennai Super Kings by six wickets in the concluding league encounter between the two teams. They finished second in the IPL standings behind Mumbai Indians, who they will face in the first Qualifier, the winner advancing to the final.

A team that enters the IPL play-offs as either table-toppers or No. 2 gets two clear shots to make the final.

"If you can't win a game, you make sure you get the opposition to get the runs in most number of overs. (Qualifying for top 2) Yes, and that's something you have to keep in mind," Dhoni said after the match.

"We want to win the game, but if the opposition does well, you have to quickly adapt and re-assess," said Dhoni at the post-match presentation ceremony.

Kings XI chased down the target of 171 runs in 18 overs, but CSK will be happy that with a net run-rate of +0.131, which is far better than Delhi Capitals's +0.044, that they will remain in the top two and have two chances to qualify for the IPL final.

Dhoni applauded his bowlers for pulling things back and not letting the KXIP batsmen finish the game earlier.

"The first seven overs… we were quite down, but then the bowlers were able to pull things back a little bit. They bowled well in the last 8-9 overs for us."

"You need to give credit to them. They bowled really well. We had to get a par score, but it was difficult with their three spinners...it was difficult to manoeuvre in the first six overs.

"Overall, it was a really good batting effort from their side. KL (Rahul, who scored a 36-ball 71), batted really well and (Nicholas) Pooran towards the end was good with his lusty hits. We did whatever we could, it did not work for us."

KXIP skipper Ravichandran Ashwin said his team would have to build a core group for the next season.

"We haven't qualified but we have to build a core group to keep going for the next few seasons. CSK has a fulcrum of how they go about things, same with MI (Mumbai Indians); Sunrisers Hyderabad does it differently. We have to look at that in the future. We have to post a score that you can defend and some of the best teams do that very consistently," said Ashwin.

The India off-spinner said his team failed to win close humdingers during the league phase.

"It was not easy for us, but we haven't been outplayed much in many games, except against Sunrisers Hyderabad. We just haven't been able to close out the close humdingers.

"We have played some good cricket, and building on this is very important. There are a few reasons; we didn't close out games, particularly in the Powerplay and our middle-order. I feel that when teams plan and come back to us, we need to respond properly. That's where some teams tick the box - they have played together for a long time," he said.

Man-of-the-match K L Rahul admitted that he finally played freely as his team had nothing to lose with KXIP already out of the play-offs race.

"I've been holding myself back till the last game, because my role was different -- playing 20 overs and holding up one end. We knew there wasn't much left for us in this game. But, sometimes, you have to alter your game and play according to how the team wants, but tonight I was playing much more freely.

"It came out very well today as my strike-rate was much higher. But looking back at it from a personal and team point of view, my strike-rate has dropped, but I have won more games for my team this year," said the opener.

Rahul said when a batsman has runs behind him, he could play with a lot more freedom.

"You have to curb your shots at times, and if I did that last year, we could have done better. Having runs behind you always helps you play with a lot of freedom and not think too much and just react to the ball - that only helps you when you have runs behind you," he said. 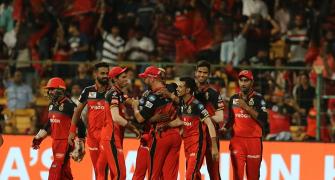 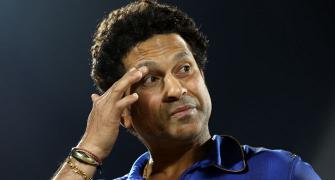 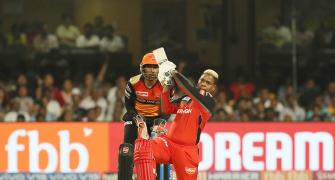 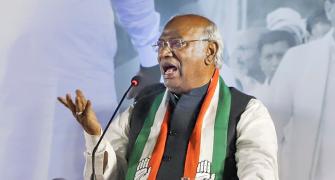 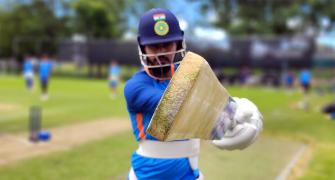 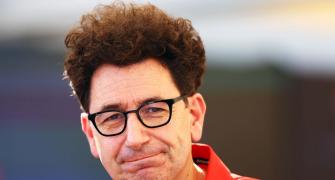 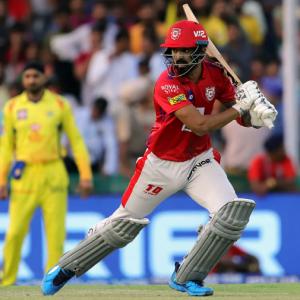 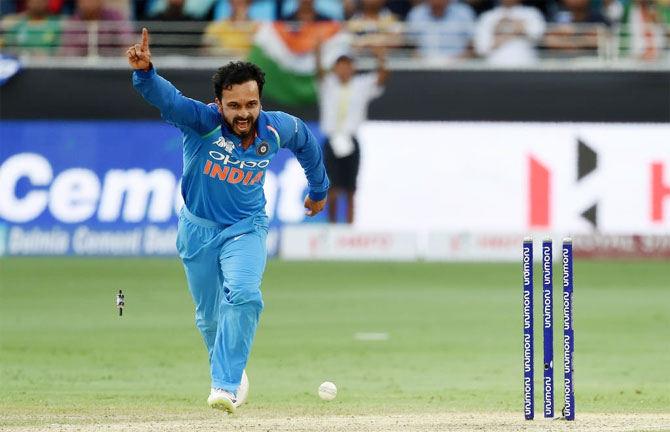