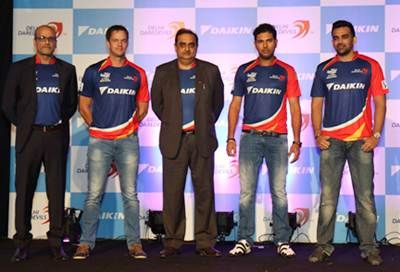 Out of favour because of poor form and injury, Zaheer Khan and Yuvraj Singh are targeting the IPL to make a comeback to the Indian team.

The India discards, who were picked by Delhi Daredevils in the Players’ Auction last month, exuded confidence of a successful showing in the upcoming eighth edition of the Indian Premier League, which commences on April 8.

"It’s been couple of hard years for me since my comeback from my treatment. I’m in good shape and will look to perform well and make a case for myself in the Indian team," said Yuvraj, at the unveiling of Delhi Daredevils' new jersey in New Delhi on Tuesday.

The Punjab all-rounder, who was purchased by the Delhi franchise for a record Rs 16 crore, the costliest-ever buy in the history of the IPL, is hoping to live up to expectations.

"It's an important season and I've had a good domestic season so far. But IPL will be different as it will be T20 and together we would like to perform well and take Delhi ahead in the tournament," the 33-year-old, who last played for India in 2013, added.

Zaheer, 36, is returning to cricket after nearly 10 months following an injury in the last IPL season when he played for  Mumbai Indians.

"At the moment I'm looking to just enjoying playing cricket again. So looking to take one step at a time and IPL is the first step," said Zaheer, who was snapped up by Delhi for Rs 4 crore.

"It’s a good challenge. It’s been a tough season for Delhi in the last season. So there is lot of responsibility on our shoulders and we are looking out for challenge," he added.

Asked about renewing their association with former India coach Gary Kirsten, under whom India won the 2011 World Cup, both Zaheer and Yuvraj felt their past experience of working with the South African will come handy.

"As you all know, he is a good coach and we have spent lot of time together, so we know his working style and vice versa. So we hope we gel well and perform to our potential," said Zaheer.

Delhi Daredevils, who are targeting their first IPL title, made a string of high-profile purchases in the auction, including the likes of Sri Lanka captain Angelo Mathews and former India leg-spinner Amit Mishra.

They open their campaign against Chennai Super Kings in Chennai on April 9.

Check out the complete schedule