Chennai Super Kings inflicted a crushing 86-run defeat on Delhi Daredevils at the Feroz Shah Kotla and handed the home team its sixth consecutive loss in the Indian Premier League on Thursday.

A pathetic batting display by the top and middle order saw Delhi fold in 17.3 overs.

On the other hand, Chennai Super Kings, desperate to get back to winning ways, capitalised on some ineffective bowling by Delhi to put up a challenging score of 169 for 4 on the back of a scintillating 65 not out by veteran Mike Hussey and a swashbuckling 23-ball 44 by skipper Mahendra Singh Dhoni.

Delhi suffered the ignominy of being bowled out for 83, inside 18 overs overs, the season's lowest total.

Delhi Daredevils' miseries were compounded as unheralded medium pacer Mohit Sharma bowled an impressive opening spell in which he removed David Warner and Virender Sehwag, literally shutting the match out for the hosts.

Sharma capped off impressive bowling figures of three for 10. 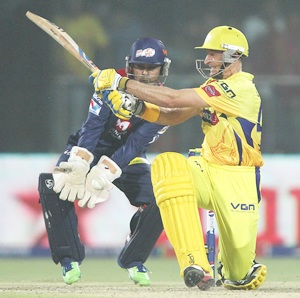 Theoretically a possibility remains for qualification in the knock-out, but based on current performances it will be a great achievement if Delhi can avoid ending at the bottom of the heap, which they are in now.

Kedar Jadhav's 28-ball 31 was the lone bright spot as the other batsmen hardly showed any stomach for a fight.

That CSK bowlers maintained a disciplined line throughout made it even tougher for the home team batsmen to break the shackles.

There were no significant partnerships as most of the batsmen were out playing some atrocious shots.

Warner (1) was played on trying to go for a cut shot while Sehwag (17) mistimed a pull shot to hole out in the deep.

Daredevils' experiment with Manprit Juneja seemed to have hit a dead end as he failed once again.

After a half-century in the first game, skipper Jayawardene's woeful IPL form continued; he could score only six from 11 deliveries before being adjudged leg before off Chris Morris.

There was no co-ordination while running between the wickets as Jeevan Mendis and Jadhav were involved in a horrible mix up that saw the Sri Lankan being run out.

Having lost the top four batsmen inside the powerplay, it was impossible for the hosts to make a comeback.

Earlier, electing to bat, Chennai Super Kings were off to a good start, courtesy openers Murali Vijay and Hussey. Both went about their business in style, with Vijay smacking two fours off Umesh Yadav in his first over.

South African pacer Morne Morkel broke the 30-run opening wicket stand when he had Vijay trapped in front for 18.

Raina made his intentions clear from the outset, driving the first delivery he faced from Morkel through the covers.

Chennai raced to 39 for one at the end of the mandatory powerplay.

But what followed, to the surprise of many, was Jayawardene's decision to bring Virender Sehwag into the attack.

Sehwag, rolling his arms over for the first time in a long while, drew the loudest applause from the crowd as he looked at ease while bowling his off-breaks.

The Delhi pacers kept it quiet for a while before Raina broke the shackles with two consecutive fours off Yadav, who returned for his second spell, in the 11th over.

Hussey, too, followed suit as he clobbered Ajit Agarkar for a four and a six over mid-wicket to raise the 50-run partnership for the second wicket.

Both looked set for the final assault when Irfan Pathan brought about Raina’s downfall, having him caught by wicketkeeper Kedhar Jadhav while looking to smack one over the off-side.

Dhoni promoted himself up the order, ahead of Subramaniam Badrinath, and the captain justified the move as he launched an all-out attack on the Delhi bowlers.

Jayawardene kept rotating his bowlers but to no avail as Dhoni and Hussey put on display their vast repertoire of stroke-play.

If the lacklustre display by the Delhi bowlers was not enough, their misery were further compounded by their butter-fingered fielders.

Dhoni was dropped by Agarkar at long-off off Yadav, when he was on 19. Agarkar misjudged the catch completely as he was left with no other option but to shake his head in disbelief.

Hussey and Dhoni brought together the 50-run partnership for the third wicket in just 27 balls as the overs between 13-18 yielded 56 runs for CSK.

Both had saved the best for Morkel as the South African paceman was clobbered for three fours and a six for 19 runs in his last over.

Dhoni was dismissed in the last over of the innings but, by then, he had done his job. 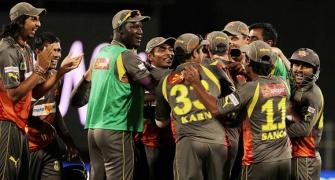 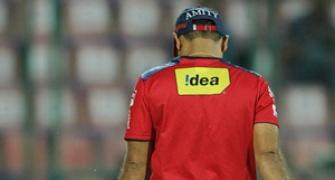 Dew factor led to recurrence of Sehwag's back problems 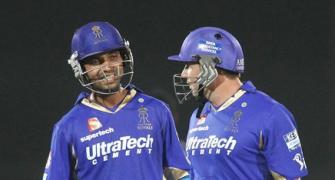 Watson has struck 60 sixes for Rajasthan in the IPL! 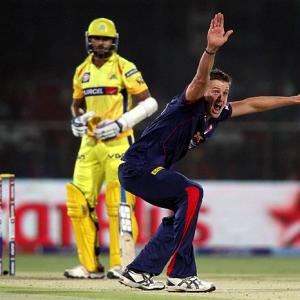 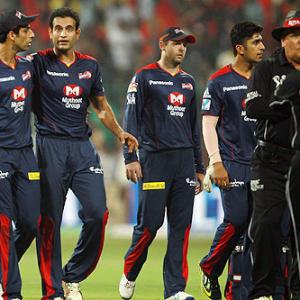