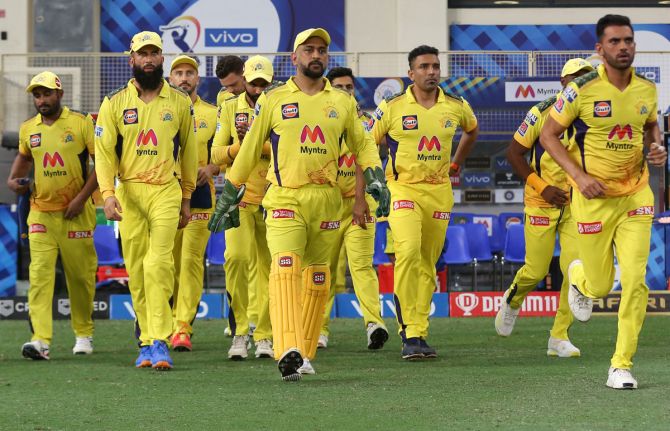 IMAGE: Three-time champions Chennai Super Kings bounced back from a forgettable IPL 2020 to became the first team to secure a spot in the play-offs this season. Photograph: BCCI

Eyeing a top-two finish, Chennai Super Kings will start as the firm favourites when they take on Punjab Kings in the Indian Premier League, in Dubai, on Thursday.

The Mahendra Singh Dhoni-led team, despite two straight defeats prior to the final round-robin match, will have its nose ahead against an inconsistent Punjab outfit that is all but out of the play-offs race.

Three-time champions CSK, who have roared back from a forgettable IPL 2020 and became the first team to secure a spot in the play-offs this season, have been in good form in the second leg of IPL in the UAE.

The CSK batsmen are in good form, especially the stylish Ruturaj Gaikwad, and they will be eager to continue the good work. Gaikwad and veteran South African Faf du Plessis have been consistent at the top, while Ambati Rayudu has been among the runs in the middle order.

Moeen Ali has done what has been asked of him but the struggles of Suresh Raina, who missed the last match against Delhi Capitals, and skipper Dhoni are worrying signs for CSK heading into the play-offs.

Ravindra Jadeja has time and again underscored his value as an all-rounder, making crucial contributions and will be key if CSK have to go all the way.

The bowlers, though, did not have a happy outing against Rajasthan as Yashasvi Jaiswal and Shivam Dube went on an all-out attack. They will be eager to make amends against Punjab.

Deepak Chahar, with 12 wickets so far, has been more than a handful for opposition batsmen upfront but he tends to go for runs in the death oivers.

Shardul Thakur has been superb with 15 scalps, the best for a CSK bowler in this year's IPL and he will look to carry on the good work in the business end.

The duo of Josh Hazelwood and Dwayne Bravo have put their skills to good use as have Jadeja and Ali. All-rounder Sam Curran has been ruled out of the rest of the tournament owing to injury but CSK won't be worried too much as they have Bravo, who is enjoying a good run. 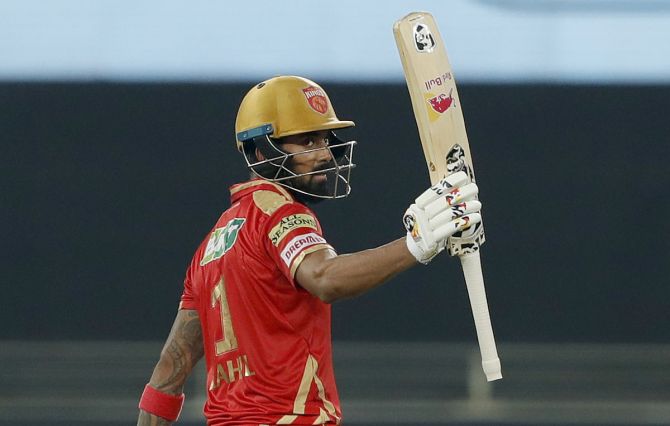 IMAGE: Punjab Kings captain KL Rahul is the top run getter in this IPL with 528 runs from 12 matches. Photograph: BCCI

Inconsistency has been the bane of the K L Rahul-led Punjab team, who are sixth in the table with 10 points.

The skipper leads the season's charts with 528 runs while his Karnataka state-mate Mayank Agarwal has 429, but the others haven't contributed much which is one of the reasons for Punjab Kings' woes.

On the bowling front, Mohammed Shami (18 wickets from 13 matches) and Arshdeep Singh (16 wickets) have been the stars while Ravi Bishnoi, who had been surprisingly benched on occasions, had had his moments.

Rahul & Co may find the going tough against CSK and a win may keep them in contention for a top-four spot, albeit only mathematically.

CSK, on the other hand, will be eager to wrap up the league phase with a win and head into the play-offs with confidence.

A loss could potentially jeopardise CSK's chances of finishing in the top two and Dhoni is aware of that. 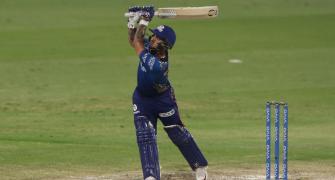 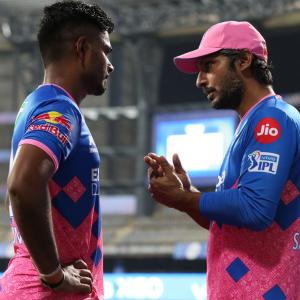 Fault lies with us, not the pitch or toss: Sangakkara