News
Business
Movies
Sports
Cricket
Get Ahead
Money Tips
Shopping
Sign in  |  Create a Rediffmail account
Rediff.com  » Cricket » Fault lies with us, not the pitch or the toss: Sangakkara

Fault lies with us, not the pitch or the toss: Sangakkara

'Unfortunately, we didn't adapt, Mumbai bowled very well and we lost too many wickets, so we could never attack at any stage.' 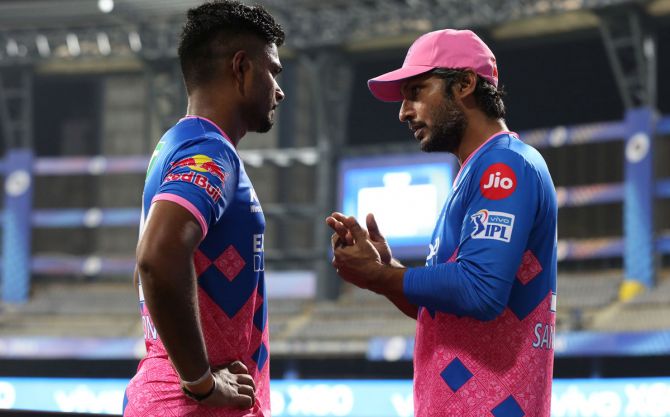 Rajasthan Royals' director of cricket Kumar Sangakkara blamed his team for the heavy defeat at the hands of Mumbai Indians in the IPL match in Sharjah on Tuesday, saying the fault did not lie with toss or pitch.

Asked whether toss was a big factor, Sangakkara said, "Well, you could probably say that, we haven't played here at Sharjah before and watching the other games, it seems to be slightly better in the night and there was probably little bit more pace."

"But once you have only 90 on the wicket (to defend), it was really tough unless you had this amazing Powerplay with wickets and very few runs.

"The crucial part for us was, we were 42/1 after the Powerplay and the plan was to extend it beyond the 13th/14th over, with at least seven wickets in hand, so that we could really target a bowler or two and build a platform beyond the 15th over."

"Unfortunately, we didn't adapt, Mumbai bowled very well and we lost too many wickets, so we could never attack at any stage. So probably, the fault lies more with us, than just the pitch or the toss," he added.

Put into bat, Rajasthan could manage only 90/9 in their 20 overs, which Mumbai chased down in just 8.2 overs, with young Ishan Kishan blazing his way to an unbeaten 50.

The pitches in Sharjah have been two-paced and batters haven't found run scoring easy.

According to the former Sri Lankan captain, the pitches that are on offer in Sharjah test the skills, flexibility and mindset of the players.

"So it's an experience, so we will have to wait and see how they will turn up for the (T20) World Cup," he added.

Asked whether he was surprised about how Mumbai approached the run-chase, Sangakkara said, "No, we would have done the same. The Powerplay was the easiest period to bat in, so we would have probably approached it with the same mindset or try and get as many runs as possible."

"We probably didn't bowl as well as we should have, but also when you are chasing a low total, once you get that power-play going, the rest is just easy," he quipped.

Mumbai Indians pacer Coulter-Nile, who returned with match-winning figures of 4/14, lavished praised on Kishan, who finally got going after a run of poor scores.

"I think it is good to have anyone among runs, it is really good, Ish (Ishan) coming in after missing couple of games to perform really well on such a tough wicket, just shows the quality of guys sitting on the bench, they can come in and perform for us.

"Very happy to see him score runs, he has been smashing them all pre-season," Coulter-Nile said.

The Australian speedster also said that everyone in the team needs to bowl well for a particular bowler to be successful.

"We all have to bowl well for someone to be successful. We had Boulty (Trent Boult) bowl well, (Jasprit) Bumrah bowled well, we saw Neesh (Jimmy Neesham) bowl well today. Everyone who comes in is responsible to keep that pressure on.

"I was lucky that the pressure was applied when I came on. That was the point where it got all too much. So today I got the wickets, it could be anyone next game.

"As long as we keep bowling as a unit, we'll see a lot more success. We've been pretty good the whole time. Even when (Adam) Milne was playing, he bowled beautifully. I think we've been really good and hope we can keep that going," he said.