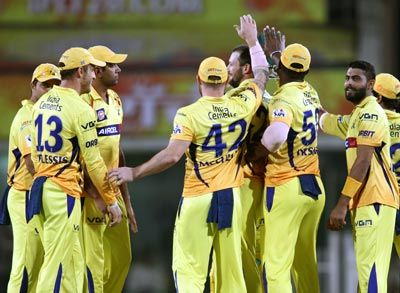 Ravindra Jadeja made the opening match in the home leg of the Indian Premier League a one-sided affair as Chennai Super Kings scored a 34-run victory over Kolkata Knight Riders, in Ranchi, on Friday night.

In a match reduced to 17 overs-a-side after rain delayed the start by an hour and 40 minutes, he produced a brilliant spell of spin bowling to claim four wickets for 12, after Brendon McCullum's sizzling half-century powered Chennai to a daunting 148 for three.

Mohit Sharma also bowled well, bagging 3-22 as Kolkata were restricted to 114 for 9.

It was Chennai’s fifth straight victory in six outings, while Kolkata, who started the just-concluded UAE leg with a victory, suffered their fourth defeat in six matches.

McCullum pulverised the Knight Riders attack during a 40-ball 56, which contained five boundaries and two sixes before Mahendra Singh Dhoni (22) and Jadeja (17) upped the ante in the final overs.

The Chennai bowlers, led by Jadeja, then combined to leave Kolkat gasping at 38 for four in the sixth over.

Robin Uthappa top-scored for Kolkata with a 38-ball 47, while

Yusuf Pathan hit a 28-ball 41, with the help of four sixes and a four, but it wasn’t enough.

Kolkata got off with a flurry of boundaries, most them coming from the blade of Uthappa, who hit Ishwar Pandey for two successive fours.

Sharma gave away 15 runs in his first over as Uthappa collected two more boundaries off the pacer.

Gambhir was out after a misunderstanding with his opening partner, Uthappa. Hilfenhaus collected the throw from Dhoni and under-armed it to the stumps at the non-striker's end as the Gambhir failed to get back in time.

Manish Pandey was next to get out as he lobbed Jadeja's first ball into the covers. Sharma then pulled off a good catch diving forward to send back Shakib Al Hasan and give Jadeja his second wicket.

Uthappa continued to bat freely, cutting Pandey through point after picking a boundary off Suresh Raina.

From 38 for four, it became 65 for five, when Jadeja got Suryakumar Yadav plumb in front.

With the required rate heading north with each delivery, it was as good as over when Jadeja had Uthappa caught behind after the batsman had hit five fours and a six.

Sharma came back to add to his tally of wickets.

Chennai also got valuable contributions from Suresh Raina (31), Mahendra Singh Dhoni (22 not out) and Ravindra Jadeja (17 not out).

The two-time former champions raced away to 20 before Shakib Al Hasan, who opened the bowling for Kolkata, dismissed Dwayne Smith with the third delivery of the third over.

Going for a sweep, Smith, after kick-starting the innings with a boundary, missed the line and was trapped in front of the wicket for a 11-ball 16.

McCullum, however, carried on and pulled R Vinay Kumar with utter contempt over the deep midwicket fence for a maximum.

Another short one from Piyush Chawla was dispatched over the on-side for a boundary by McCullum.

The Kolkata bowlers, especially Vinay Kumar, was guilty of bowling too short and McCullum took full advantage, pulling him for two more fours.

Suresh Raina, meanwhile, was content playing the second fiddle to the New Zealander, before he lofted Chawla straight down the pitch for a massive six. Using his wrists, the left-handed batsman found the gap between deep midwicket and long on for another four, before driving Shakib through the covers.

However, a waist-high full toss from Shakib did the trick for Kolkata, with Raina holing out at long-on in the 11th over, even as CSK inched towards 100. Raina hit four boundaries and a six in his 25-ball stay.

Jacques Kallis was introduced in the 12th over and was greeted with a six by McCullum, which also brought up the New Zealander’s fifty.

But Andre Russell got the burly batsman, having him caught at deep point in his first over.

It was left to skipper Dhoni to do the hitting in the innings' final over that fetched 15 runs.