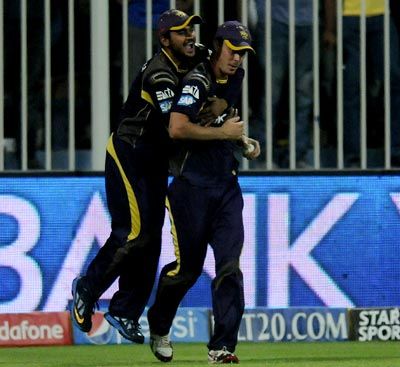 Kolkata Knight Riders rode on a brilliant all-round showing from Australia’s Chris Lynn to score a dramatic victory over Royal Challengers Bangalore in the Indian Premier League match, in Sharjah, on Thursday night.

After propping the Kolkata innings with a 31-ball 45, the 24-year-old Australian, playing his first match this IPL season, pulled off an acrobatic catch at the deep mid-wicket boundary line to dismiss A B de Villiers in the last over of the match, and RCB, chasing 151 for victory, fell short by two runs.

Needing nine off the last over, RCB could score only seven, thanks largely to Lynn's catch and R Vinay Kumar's superb bowling.

On a good batting surface, Bangalore were off to a blazing start, as openers Yogesh Takawale (40) and Parthiv Patel (21) dealt mostly in boundaries.

Takawale was the more aggressive of the two as he launched into a flurry of boundaries, picking KKR pace spearhead Morne Morkel for special treatment.

The 29-year-old scored six of his eight boundaries off Morkel, helping his side reach 50 off just 37 balls.

In between, hoping for a breakthrough, KKR skipper Gautam Gambhir handed the ball to Sunil Narine, but took him off after a very economical first over, preferring to keep his most important bowler for the latter overs.

However, after settling in nicely, Takawale was trapped in front of the wicket by Jacques Kallis. His 40 came off just 28 balls.

Captain Virat Kohli (31) walked in but even before he could get his eye in, Patel was making his way back to the dressing room, as his leading edge popped up for Lynn to take at cover.

This brought Yuvraj Singh (31) into the middle and the two experienced players went about the task in a calculated manner.

At the half-way stage of their innings, RCB needed 64 runs with eight wickets in hand. Yuvraj brought the equation down by a few runs after he clobbered Umesh Yadav for a six into the midwicket stands. A single was taken before Kohli whacked the bowler over the midwicket region.

But just when it appeared as if RCB would cruise home, the mystery spinner had his revenge off the next delivery, his tossed-up ball spinning in before beating the inside edge of Kohli's bat.

At the end of 16th over, RCB needed 28 runs with seven wickets still remaining, but the team literally choked at the crunch.

For KKR, Vinay Kumar finished with 2 for 26 while there was a wicket for Narine.

Earlier, sent in to bat, Kolkata Kinght Riders had yet another disastrous start, losing skipper Gautam Gambhir for a duck for the third straight time in the ongoing seventh edition of the cash-rich event.

An 80-run third-wicket partnership between Kallis and Lynn steadied the innings and enabled them put up some much-needed runs on the board before three quick wickets pegged the former champions back.

Robin Uthappa (22) boosted KKR's run rate with a couple of sixes, but could not last till the end.

It was then left to Suryakumar Yadav’s late unbeaten 24 that gave them a decent total.

The only difference with Gambhir's dismissal this time around was that he was out for a golden duck, trapped in front of the wicket by a fast and full Mitchell Starc delivery off the third ball of the innings.

Albie Morkel struck in the next over as Manish Pandey's leading edge was easily taken by Virat Kohli at point. It left KKR struggling at 10 for two in the second over.

When the 24-year-old Lynn walked in to bat, KKR were in a spot of bother, but that did not show in the manner the Aussie straightaway went about his task.

RCB's move to introduce Muttiah Muralitharan into the attack in the seventh over backfired, as the Sri Lankan veteran was smashed for two sixes by Lynn in his first over.

Kallis swept Muralitharan over deep square leg after Lynn whacked Yuzvendra Chahal for a maximum over deep mid-wicket, where Starc completed the catch even as he moved backward and stepped on the rope.

The association was brought to an end after Aaron's re-introduction. With the spinners going for runs, bringing back the pacer proved to be a successful move.

Lynn's flat-batted hit failed to clear A B de Villiers at long-off. The batsman struck three sixes and as many fours in his 31-ball knock.

Next man-in Yusuf Pathan lacked discretion, evidenced by his irresponsible shot off only the second delivery he faced. The result was a simple catch for Kohli at mid-off, the successful bowler being Aaron.

Having used up quite a few deliveries, Kallis fell while going for a big hit against Chahal.

Had Uthappa and Yadav not chipped in with quick runs, KKR may have ended up with nothing for their bowlers to defend.

Image: Chris Lynn is congratulated by Manish Pandey after his breathtaking catch. 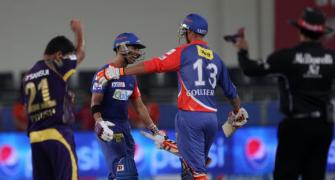 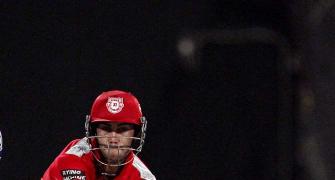 IPL Quiz: Which bowler took the most wickets in 2008? 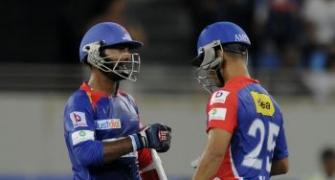 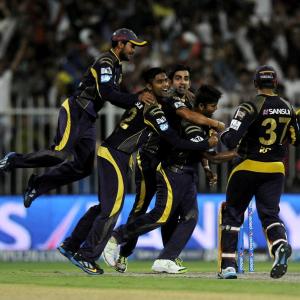 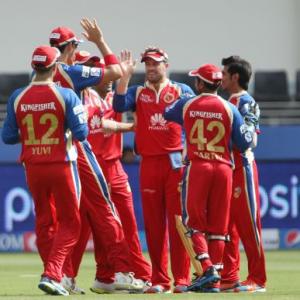