Kolkata Knight Riders thrashed Delhi Daredevils by six wickets in a lopsided contest to emerge as the table leaders in the Indian Premier League at the Ferozshah Kotla on Monday.

Chasing a modest target of 154, KKR knocked off the runs with eight balls to spare, courtesy Brendon McCullum's 56 and his 68-run opening stand with skipper Gautam Gambhir (36).

KKR now lead the points table with 17 points and are all but through to the knock-out stage.

With Sehwag and Kevin Pietersen doing the bulk of the scoring in the earier matches, the Daredevils middle-order was put to test for the first time and it failed miserably.

The likes of Ross Taylor, Yogesh Nagar should take bulk of the blame as they couldn't stand-up and be counted  when their team needed them most. The defeat is certainly a wake-up call for Sehwag's boys.

The Daredevils lost the match within the Powerplay overs as Gambhir and McCullum started off from where they left against Pune Warriors.

McCullum, who has started to find some form, smashed Irfan Pathan for successive boundaries while Gambhir hit left-arm spinner Shahbaz Nadeem for two fours and a six in the fourth over of the innings that fetched 16 runs.

In the next Umesh Yadav over, the duo got another 13 runs as the 50 came off in only five overs.

The Daredevils pacers lacked the discipline as they couldn't bowl to one channel which made life much easier for Gambhir-McCullum combination.

Finally Varun Aaron, coming back from stress reaction injury, finally dismissed Gambhir. It was a delivery that climbed up on Gambhir as he tried to play the dab-shot to thirdman only to inside edge onto his stumps.

However, there was no stopping McCullum as he continued playing his shots with ease. With Jacques Kallis (30, 27 balls, 3x4) playing the role of a second fiddle to perfection, McCullum repeatedly bisected the fielders between fine leg and mid-wicket after being gifted with deliveries on his pads. He completed his 50 with a couple off Morne Morkel off 40 balls.

Umesh Yadav brought some life back to the lop-sided contest with twin blows as both Kallis and McCullum (56,  44 balls, 7x4) were dismissed, being hurried onto their shots by short-pitched deliveries but that was too late in the day. 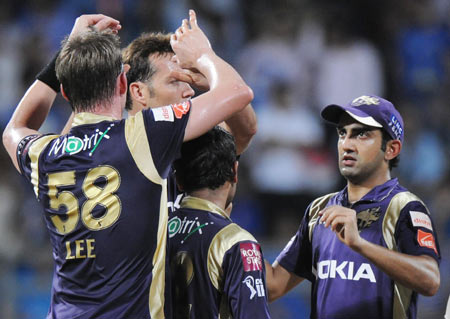 Earlier, Delhi Daredevils didn't fire as a batting unit as Kolkata Knight Riders restricted them to a manageable 153 for nine in their stipulated 20 overs.

Opting to bat first, Daredevils started off well with Sehwag blasting 23 off only nine deliveries but failed to convert his good start.

The likes of David Warner (21), Mahela Jayawardene (30) got out just when they looked set while Ross Taylor (16)'s woeful run with the willow affected Daredevils' chance of putting up a good score.

As many four batsmen were out in the final over of the innings bowled by 'mystery spinner' Sunil Narine who again had enviable figures of two for 23 while Jacques Kallis (2-20) made telling impact removing both Sehwag and Warner.

Sehwag was again off the blocks in a flash as he hit a couple of boundaries and a huge six over mid-wicket off left-arm seamer Pradeep Sangwan in the second over of the innings.

Warner, who looked scratchy during the first few deliveries, then got his act together as he hit Brett Lee for a straight six and followed it up with a cover drive.

In only 3.2 overs, Sehwag-Warner duo added 40 runs and it looked like KKR bowlers were in for a 'Knightmare' when  Kallis provided twin-breakthrough.

First he had Sehwag adjudged leg before when he was trying to work the ball on the leg-side. So confident was Kallis that he didn't even bother to appeal at the first go. Sehwag had hit three boundaries and a six in his 23.

Warner (21, 19 balls, 2x4, 1x6) hit another flashy boundary which was more like a shot of a desperate batsman before Kallis got the dangerous Aussie to edge one to Brendon McCullum behind stumps.

Jayawardene survived a confident caught behind appeal after which he had a heated exchange with opposition skipper Gambhir. Ultimately it was Ross Taylor who had to intervene.

The Sri Lankan skipper was again lucky when McCullum dropped him off Kallis' bowling. But then he started showing his class.

A deft glance off Sangwan, a powerful square cut and swept six off Rajat Bhatia were sheer class. The lap shot over keeper's head off Sunil Narine was also a delight to watch as he added 46 runs for the third wicket with Taylor.

But just when he was starting to look threatening, he called for a non-existent single and failed to beat Gambhir's underarm throw. Jayawardene scored 30 off 27 balls with three fours and a six.

Taylor's poor form continued as he failed to middle a single delivery. The dot balls he played added to the pressure and the initial impetus provided Sehwag was long gone.

Finally, he was holed out in the deep off Sangwan's bowling. The Black Caps skipper managed 16 off only 27 balls. 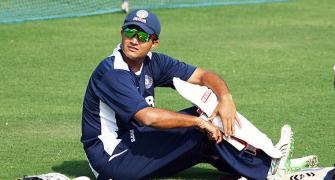 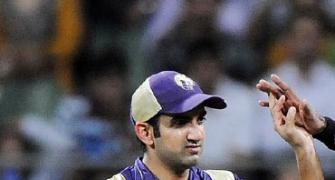 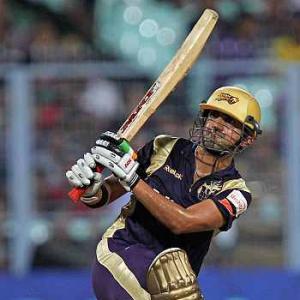 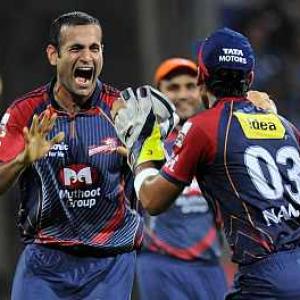