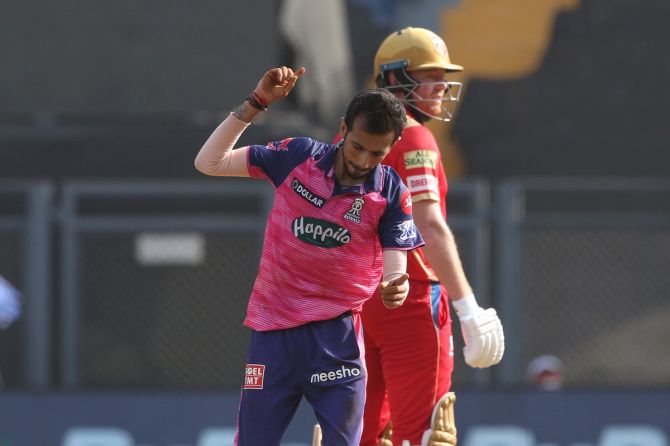 IMAGE: Yuzvendra Chahal continued his stellar form this season with the ball for the Rajastan Royals, taking 3/28. Photograph: BCCI/IPL

Rajasthan Royals ended a two match losing run with a dominant 6 wicket win over the Punjab Kings at the Wankhede stadium in Mumbai on Saturday, May 8, 2022.

Rajasthan came up with a composed effort with both bat and ball in a high-scoring match.

Experienced leg-spinner Yuzvendra Chahal continued his stellar form this season with the ball for Royals, taking 3/28 in four overs, including 10 dot balls. He was also the most economical of all. IMAGE: Chahal strengthened his hold over the Purple Cap with 22 wickets. Photograph: BCCI/IPL

Bhanuka Rajapaksa and Jonny Bairstow then added quick runs. But Chahal started to look threatening with his brilliant performance against PBKS, stalling their progress in the middle overs.

Rajapaksa, the big-hitting left-hander from Sri Lanka, fell for 27 off 18 balls in the 11th over after being castled by Chahal with a wonderfully disguised faster delivery.

Then in the 15th Chahal returned to pick up Agarwal's wicket after the PBKS captain tried to hit him out of the ground. In the same over, Chahal got Bairstow as well.

Bairstow tried to turn the ball on the leg side, missed the ball completely which hit his pads. The on-field decision was out, but Bairstow thought the ball might miss the stumps. To his dismay, DRS ruled it was the umpire's call. After being 89-1 in 10.2 overs PBKS slumped to 119-4 in 14.4 overs.

The 31 year old dismissed Agarwal (15) and Bairstow (56 off 40 balls) off three balls to derail Punjab in the middle overs (10-15) where they scored just 34 runs and lost three wickets.

Punjab finished with 189/5. RR came out all bats blazing to seal victory.

Chahal strengthened his hold over the Purple Cap with 22 wickets in 11 matches, helping his side move closer to the playoffs. 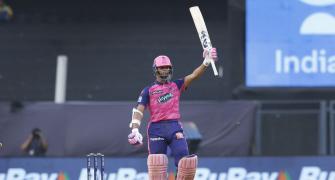 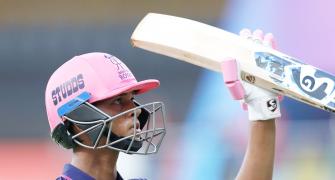 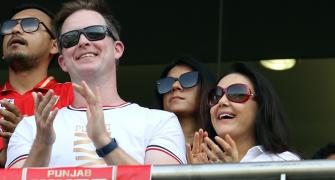