IMAGES from the IPL 2022 game between Lucknow Super Giants and Kolkata Knight Riders in Pune on Saturday. 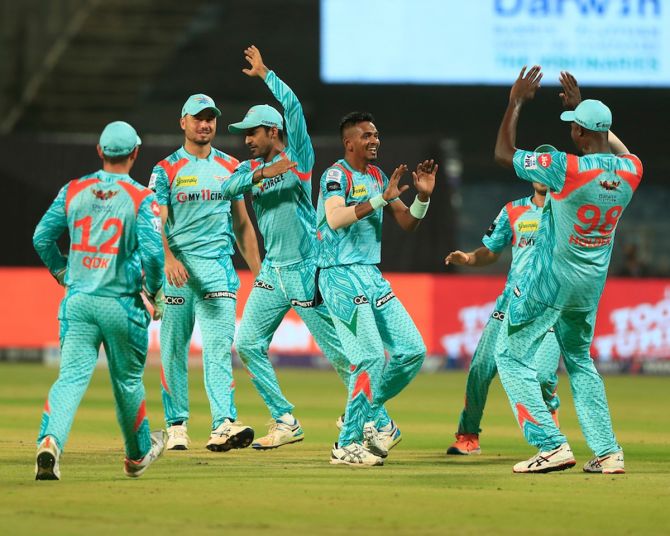 IMAGE: LSG are on top of the table. Photograph: BCCI/IPL

Quinton de Kock laid the platform with a commanding fifty and his pacers then terrorised Kolkata Knight Riders to record a crushing 75-run victory for Lucknow Super Giants which put them on top of the table with an IPL play-off berth being a formality now.

For last year's runners-up KKR, eight points from 11 games with a deflating negative run-rate now puts them closer to the exit door with lacklustre performance and unimaginative captaincy combining for what has turned out to be a disastrous season so far.

Invited to bat, De Kock slammed a 29-ball-50 but Lucknow almost frittered away a solid start before some lusty hitting in a 30-run penultimate over off Shivam Mavi took them to 176 for 7.

The LSG bowlers then raised to the occasion to bundle out KKR for 101 in 14.3 overs, despite the heroics of Andre Russell (45 off 19 balls) to gather two crucial points and take their overall total to 16 points in the IPL standing.

KKR remained at the 8th spot after suffering their 7th loss in 11 games.

Defending 177, LSG left KKR tottering at 25 for four with four bowlers picking up their first wickets. 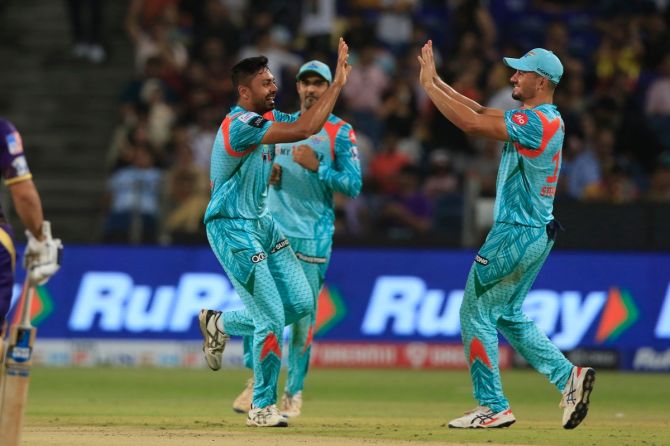 IMAGE: Nitish Rana was cleaned up by Avesh Khan with a yorker. Photograph: BCCI/IPL

While Mohsin produced a wicket-maiden to get rid of to Baba Indrajith, Chameera sent back Shreyas Iyer after rattling him with a short and quick delivery.

It has now been an all too familiar script for KKR skipper whose discomfort while facing quick bouncers is well-documented and national coach Rahul Dravid would only be worried with this glaring technical deficiency.

Aaron Finch too perished as his miscued pull was poached by de Kock as KKR slipped to 23 for 3 in the first six overs.

Nitish Rana was then cleaned up by Avesh Khan with a yorker as KKR looked down the barrels.

Russell then used his brute force to hit Holder all across the park. One was whacked at midwicket for a maximum, the second one was slapped to deep, while a flat-batted pull earned him another six and the last one was a four over short third.

After amassing 25 off the Holder over, Russell produced another maximum off Ravi Bishnoi as KKR reached 64 for 4 in 10 overs.

He and Sunil Narine (22 off 12) produced a small partnership but once Russell was out to Avesh Khan in the 13th over, it became a downward slide for KKR as they folded in 14.3 overs.

Avesh and Holder returned with three wickets each. Earlier, De Kock, who was involved in a terrible mix up with skipper KL Rahul, who got a 'Diamond Duck' (out for 0 without facing a ball), redeemed himself with an innings studded with four boundaries and three maximums.

He added 71 with Deepak Hooda (41 off 27 balls) to give LSG a good start after being invited to bat. 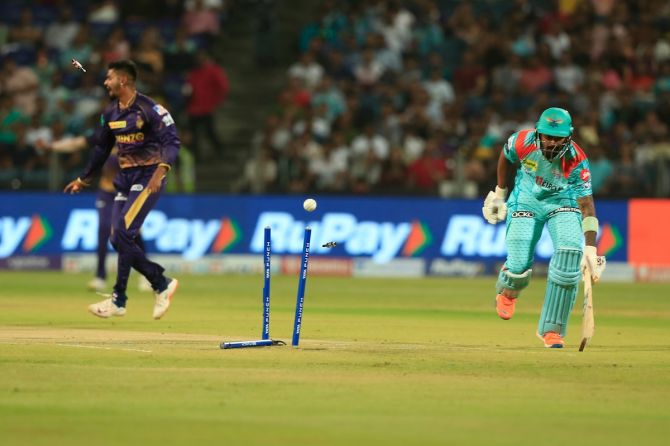 Hooda made up for the loss of Rahul's with his back to-back boundaries over extra cover off Shivam Mavi (1/50 in 4 overs), while De Kock too joined in with a special treatment to Tim Southee, clobbering him for two fours and a six in the 3rd over.

Left-arm spinner Anukul Roy and pacer Harshit Rana were next in line as De Kock smashed the former for a four before lunching into the latter for a four and two sixes to take LSG to their best score in the powerplays this season, a 66 for one.

De Kock, however, couldn't stay much longer as he was holed out in deep only two balls after completing his fifty. 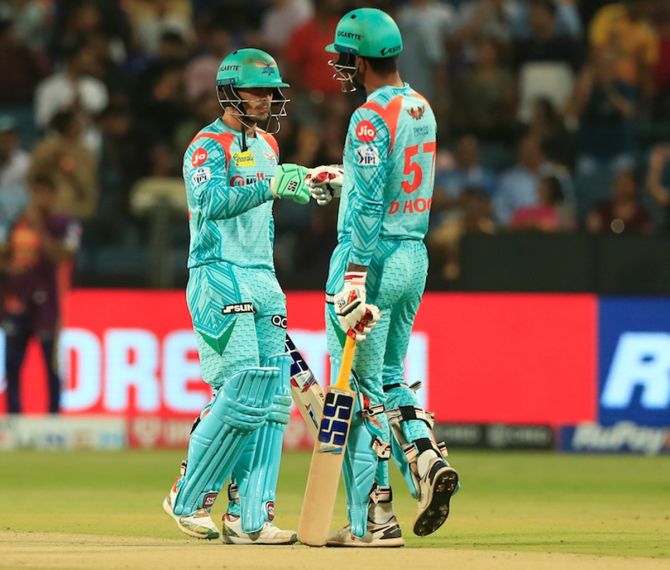 Hooda, who hit four boundaries and two sixes in his entertaining 27-ball knock tat took LSG past 100-run mark before falling to a Andre Russell delivery with his miscued pull ending in safe hands of skipper Shreyas Iyer.

Krunal Pandya then tried to keep the run-rate high and slammed two fours before ending at the hands of Aaron Finch at deep point.

The decision to promote Ayush Badoni (15 not out off 18) didn't bear result as the young Delhi batter was under pressure after a quiet over and couldn't find his rhythm with runs drying up between 12th to 16th over. 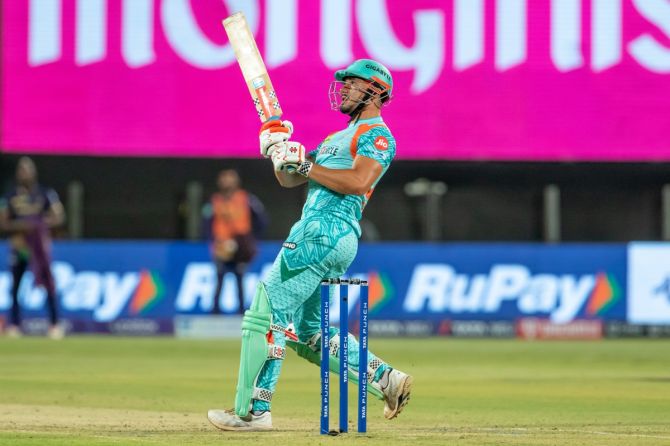 However, Marcus Stoinis (28 off 14 balls) changed things when he clobbered Mavi for three successive sixes before holing out. However, new man Jason Holder (13 off 4 balls) slammed the next two balls for two more maximums as the 19th over yielded 30 runs for LSG.

In the bowling front, KKR missed the experience of Umesh Yadav, who missed out due to a muscle pull, with Hooda and de Kock going hammer and tongs early on.

However, Andrew Russell (2/22) was rewarded for bowling back of length , while Sunil Narine (20/1) and Tim Southee (1/28) also kept things tight but the rest of bowlers bled plenty in their stipulated overs. 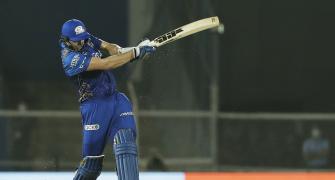 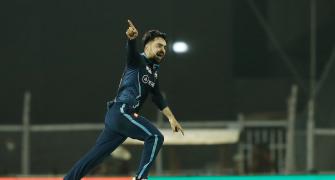 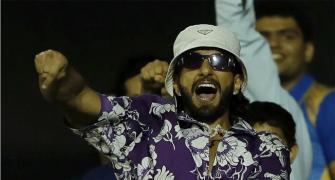 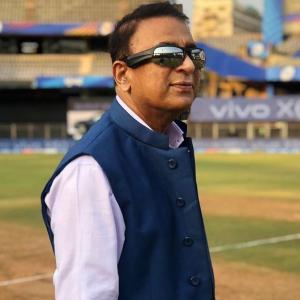