IMAGE: Kuldeep Sen with his Fastest Delivery Of The Match award at the Wankhede stadium on Sunday, April 10, 2022. Photograph: BCCI

Kuldeep Sen made the right impression on his IPL debut for the Rajasthan Royals against the Lucknow Super Giants on Sunday.

Rajasthan Captain Sanju Samson entrusted the 22 year old from Rewa in Madhya Pradesh the responsibility to defend 15 runs off the final over with Marcus Stoinis batting.

And Kuldeep kept a cool head to see his team through.

Avesh Khan swatted his first ball to cover to hand over the strike to Stoinis to close out the game.

Kuldeep then turned on the magic, bowling three dots balls with 14 needed off 2 deliveries. Stonis could manage a four off the penultimate delivery and with 10 required off 1 ball, all Kuldeep had to do was bowl a legal delivery. He did that, Stonis smashed it for a six and Rajasthan won by 3 runs.

Sanju explained why he picked the youngster to bowl the crucial over.

'Got the feel that he has done well and he is confident to go and execute his wide yorker which he has been working in the off season. Saw him in the Syed Mushtaq Ali Trophy and he was nailing his wide yorkers,' the skipper said after the match. Kuldeep picked four wickets in five matches at an economy and strike rate of 7.75 and 24 respectively in the Syed Mushtaq Ali Trophy for Madhya Pradesh this season.

Rajasthan Royals pacer Trent Boult -- one of the cricketing world's finest fast bowlers currently -- praised his team-mate for defending 15 runs in the last over.

'My role with the new ball is to take as many wickets as possible. It's a pretty simple game for me at the top and get it to swing. The humidity and the overheads assisted it. Limited English from Kuldeep, he runs in hard though,' Boult said with his killer smile in a post-match presentation.

'He executed it well in the end and he is only going to get better. Some quality fast bowling in our side and in the tournament going around. I'll probably watch my batting before my bowling,' the Kiwi said with a laugh.

'I just want to say how impressed everyone, especially I am, with how Kuldeep Sen handled his first #IPL2022 game; how he bowled, how he thinks. He bowled the hardest over under pressure and did an excellent job for us,' Rajasthan Royals Director of Cricket and Head Coach Kumar Sangakkara -- a bona fide cricketing legend -- said after the match on Sunday.

Though he wasn't quizzed about Kuldeep, the cameras caught Royals Bowling Coach Lasith Malinga -- the man with the second most wickets in the IPL -- looking very, very, pleased with Kuldeep's bowling. 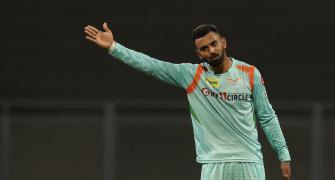 Ashwin's 'retired out' was a team decision: RR skipper