IMAGE: Shimron Hetmyer hoists Yuzvendra Chahal after he takes his hat-trick while Prasidh Krishna gives the popular leggie a pat on the head. Photographs: BCCI/IPL

The Kolkata Knight Riders-Rajasthan Royals tie had twists-and-turns galore. With all the thrilling performances, it kept us on the edge of our seats.

It was the first time ever in the IPL that a century and a five-wicket haul were recorded in the same game, and appropriately it came on the 14th anniversary of the first IPL game. It was on April 18, 2008 that the IPL began its phenomenal journey, and the batter who scored the IPL's first century was on Monday, KKR's coach -- take a bow, Brendon McCullum.

It was Yuzvendra Chahal's hat-trick (5-40) and Jos Buttler's century (103 off 61 balls) that ended up as winning performances.

Yet the Rajasthan Royals were pushed to the brink by the Kolkata Knight Riders in a thrilling finish at the Brabourne stadium on Monday night.

And let's not forget West Indies left-arm quick Obed McCoy's dream debut. KKR needed 11 runs from the final over and 25-year-old McCoy had the ball. He first got rid of Sheldon Jackson and with the other slower ball castled Umesh Yadav.

Let us also not forget how Prasidh Krishna's 19th over went for only 7 runs which gave McCoy something to bowl at.

Also, let us not forget Umesh Yadav whose batting in the death overs gave the spectators at the Brabourne and the millions watching on television and their mobile devices such excitement!

Chasing an imposing 218 target, KKR got off to a shaky start, losing Sunil Narine on the first ball. But Shreyas Iyer and Aaron Finch put KKR on course with a 107-run stand.

While Finch smashed a blistering half-century -- 58 off 28 -- to put KKR's chase on track, Shreyas played a captain's knock. But his second fifty (51-ball 85) of the tournament still ended up on the losing side. 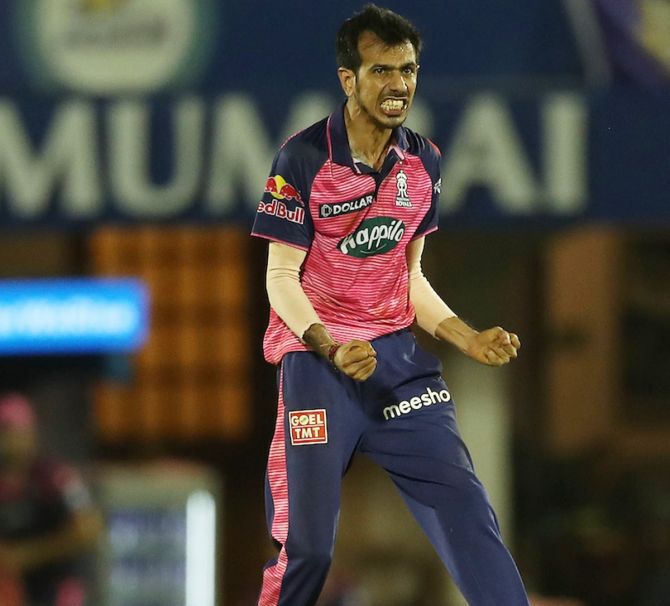 On a night when a total of 427 runs were scored, Royal's spin bowling pair of Chahal and Ravichandran Ashwin proved their worth to change the game's direction.

Chahal ensured Nitish Rana managed just 18 runs while Ashwin produced a dream delivery to send Andre Russell back to the dressing room for a golden duck.

When KKR were cruising along nicely, as the two-time IPL champions needed 40 off 24 with six wickets in hand, Chahal produced an incredible over to take four wickets in it and turned the match on its head.

Within four balls, he had Venkatesh Iyer and Shreyas Iyer, stumped and leg-before.

He then had Shivam Mavi hole out for a first-ball duck to give himself a chance at a hat-trick. He roared loudly with Pat Cummins getting an outside edge to be out caught behind for a golden duck, giving the leg-spinner a well-deserved hat-trick as well as a five-for.

Umesh Yadav nearly got KKR through with his nine-ball 21, but McCoy held his nerve in his first IPL game to defend 11 in the final over and bowl out the opposition for 210 in 19.4 overs. 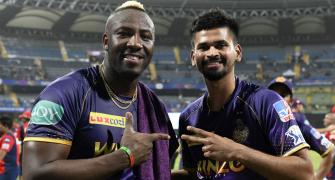 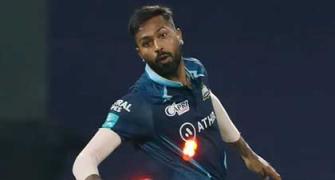 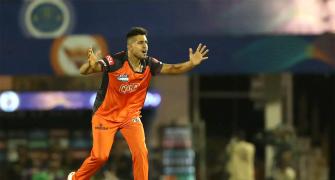 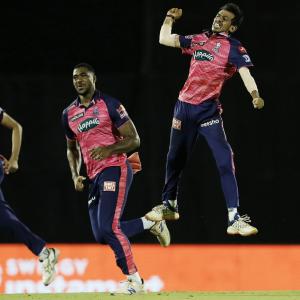 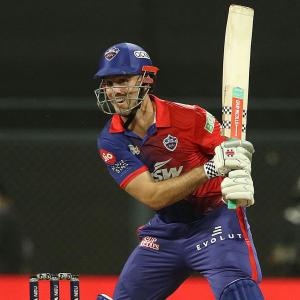