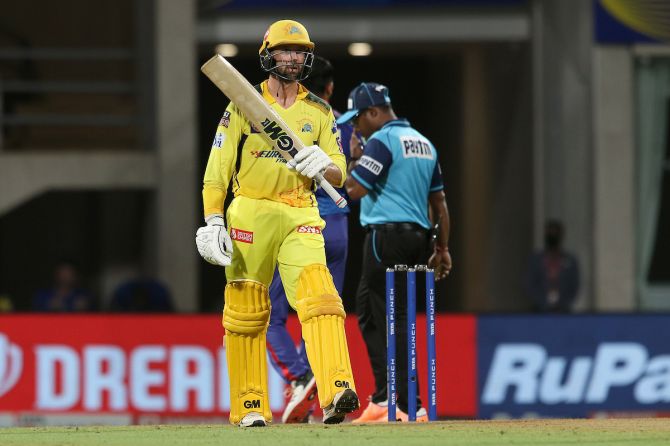 On paper, the Chennai Super Kings line-up is an embarrassment of riches. That they have done a huge disservice to their massive fanbase with their poor run of results in the first phase of the IPL 2022 is beyond doubt.

Nonetheless, in Sunday's encounter against the Delhi Capitals at the D Y Patil stadium in Navi Mumbai, Chennai showed exactly what they are capable of as they demolished their opponents by a massive 91 runs.

Leading the charge for Chennai was New Zealander Devon Conway who smashed a quick-fire 87 off 49 balls which included 7 fours and 5 sixes as CSK went on top post a massive 208 run target for Delhi to chase.

Initially drafted into the franchise as a replacement for Faf du Plessis, Conway -- who only migrated to New Zealand from his native South Africa in 2017 -- has repaid the faith that the CSK management showed in him by scoring a hat-trick of 50s in IPL 2022.

Against Delhi, Conway went about building a formidable opening partnership with his strike-partner Ruturaj Gaikwad. Together they raced to 100 in less than ten overs without the loss of any wickets. 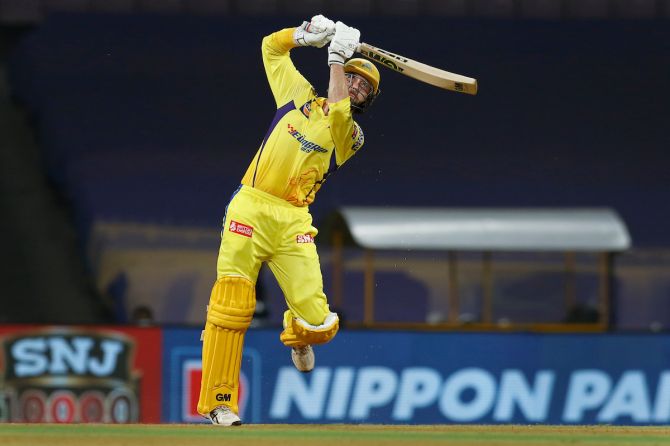 IMAGE: Conway's expertise against spin is on full show as he smashes a six off Axar Patel's bowling. Photograph: BCCI

What makes Conway a standout performer among most overseas recruits is his mastery over spinners which is an absolute must to be a consistent success in the IPL. Whether CSK make it to the play-offs this time or not, Conway in all likelihood will be serving the franchise for the next few years at least.

His expertise against spin bowling was evident as he smashed two back-to-back fours off Axar Patel's first over which completely unsettled the bowler.

He followed this up with a similar tactic against the in-form Kuldeep Yadav, who found himself at the receiving end of two sixes and a four in his first over -- one that completely rattled the spinner's confidence as he struggled to find the right line and length to attack Conway for the rest of the match. 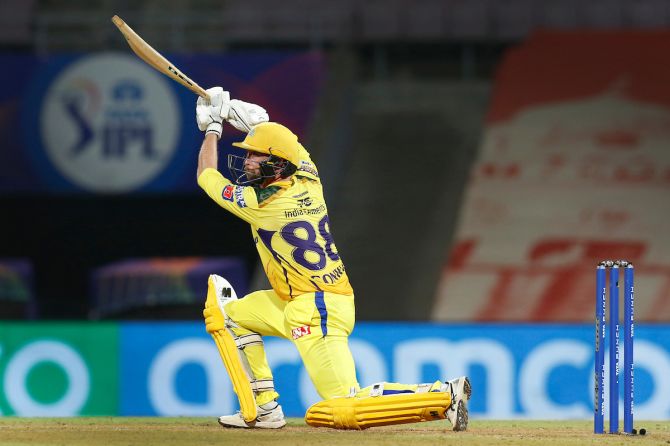 IMAGE: Conway's decision to go after Kuldeep Yadav resulted in the latter finishing empty handed with figures of 0-43. Photograph: BCCI

Following Gaikwad's dismissal for 41, Conway added another 59 runs for the second wicket with fellow left-hander Shivam Dube (32 off 19 balls).

By the time he was dismissed in the 17th over, Conway had already guided CSK to a very promising 169-1. In a rare lapse, Conway attempted to flick the ball behind the wicket for four only to find wicket-keeper Rishabh Pant instead.

Having left behind an extremely strong foundation, the remaining CSK batters cruised though to a 200+ score with effortless ease.

'Being an all-format player is my brand, being positive upfront and assessing the situation is my focus thereon,' Conway, who scored a double Test hundred on debut at Lord's last June, said after the match.

The win takes CSK out of the dreaded bottom two of the IPL 2022 standings as the team shapes up to be the dark horse of the tournament. 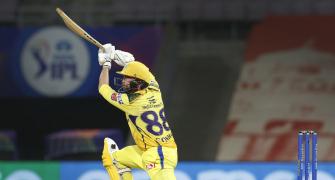 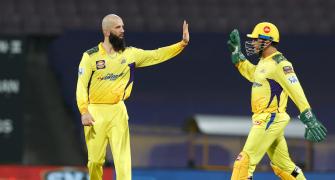 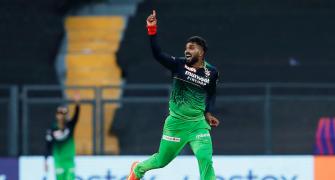 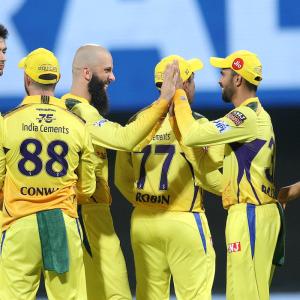