Gautam Gambhir hit a breezy half century and Lakshamipathy Balaji bagged a four-wicket haul to enable Kolkata Knight Riders beat Bangalore Royals Challengers by 42 runs and bring their IPL campaign back on track in Bangalore on Tuesday.

Sent in to bat, the Knight Riders posted a challenging 165 for eight in their stipulated 20 overs, thanks to brilliant batting by skipper Gambhir, who scored 64 in just 39 balls.

Balaji then scalped four wickets, giving away 18 runs, and Jacques Kallis accounted for two more, as the visitors restricted the Challengers to 123 for 9 at the Chinnaswamy stadium.

The victory snapped Kolkata's two-match losing streak in the fifth edition of the tournament. They were beaten by Delhi Daredevils and Rajasthan Royals respectively in their first two matches. 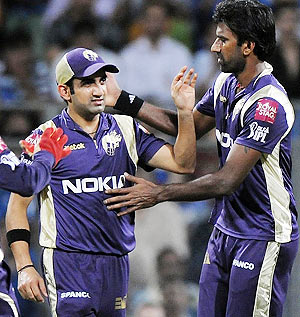 Royals Challengers had a disastrous start to their run-chase, losing four of their top batsman for just 25 runs, as pacers Kallis and Balaji claimed two wickets each.

Kallis started the demolition in the second over, having opener Cheteshwar Pujara (6) caught at slips while trying to steer the ball towards third man.

The South African all-rounder then scalped the prized wicket of Chris Gayle (2) in his next over.

Trying to pull a short delivery from Kallis over mid-wicket, Gayle ended up top-edging the ball to Laxmi Shukla at mid-on.

Balaji then got into the act, dismissing Virat Kohli (6) in the sixth over, to leave the hosts tottering at 20 for three.

Kohli miscued the ball and ended up giving a catch to Manoj Tiwari at point.

Nine balls later, the Tamil Nadu pacer cleaned up AB de Villiers (10) and then dismissed Mayank Agarwal (5) in his next over, as RCB looked down the barrel at 33 for five.

Skipper Daniel Vettori (20) and Sourabh Tiwary (18) then put up some much-needed runs, before the New Zealander was sent packing by Balaji in the 12th over.

Ryan ten Doeschate of The Netherlands then claimed the wicket of Sourabh in the 15th over.

Earlier, Gambhir led from the front as he anchored KKR to their highest total of the tournament, after the start of the match was delayed by 20 minutes due to a short circuit in the advertisement hoardings at the ground.

Gambhir blasted nine fours and one six during his knock. He shared 60 runs for the opening wicket with Kallis (22) before adding another 65-run stand for the second wicket with Manvinder Bisla (46 off 29 balls; 2x4; 3x6).

KKR were off to a flying start, with openers Gambhir and Kallis posting 50 in 5.1 overs. At the start, Kallis struggled to get going against Zaheer Khan in the first over, but managed to tuck one to vacant fine leg boundary.

In the second over, KKR accumulated eight runs with Gambhir dispatching Vinay Kumar for four.

In an eventful third over, Kallis first clipped the ball off his pads to the square leg fence and drove through mid-off for boundaries off Zaheer's bowling.

It was now the turn of Gambhir to plunder 15 runs in Harshal Patel's first over. He smashed two boundaries and a six, taking the score 35 for no loss. He then showed little respect to Zaheer, smashing him two consecutive boundaries, one each through the mid-off and long leg fence.

RCB captain Vettori brought in Muttaiah Muralitharan, who picked three crucial wickets in his last game against Delhi Daredevils, but he was also shown least respect by Kallis and Gambhir.

Vettori brought himself in the seventh over and sent back Kallis, caught by wicketkeeper de Villiers. The bowler got a thick outside edge looking to cut when the score was 60.

Gambhir reached his half century off the last ball of 13th over off Vinay Kumar. Manvinder Bisla, promoted to number three, struck a few lusty blows to maintain the high run-rate.

In a surprise move, Virat Kohli was brought in to bowl the eighth over, but he gave away 13 runs in his first over after Bisla lifted him for a six and then for a four.

Bisla, who continued from where Kallis had left, pressed the foot on the accelerator and sliced Vettori for a boundary in the next over. Bisla plundered 11 runs hitting one over the fence for six to Vettori in his third over.

RCB struck back with quick wickets from the 14th over. Yusuf Pathan was dismissed by Vinay Kumar for one (3 balls) after Bisla fell to Muralitharan.

Zaheer, who scalped his fifth IPL wicket, ran in fast and removed well-set Gambhir and Tiwary for two off five balls in the 17th over.

Muralitharan then claimed Ryan ten Doeschate, caught by Vettori at short fine leg for three in the 18th over. Vinay Kumar sent back Shakib Al Hasan in the 19th over for four when he was caught by Cheteshwar Pujara at long off.

Harshal Patel then removed Laxmi Ratan Shukla, the last KKR wicket to fall, caught Harshal Patel for five before Brett Lee smashed a six off the bowler in the final over. 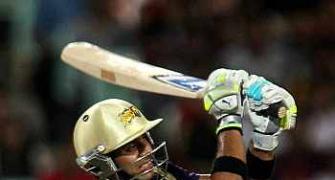 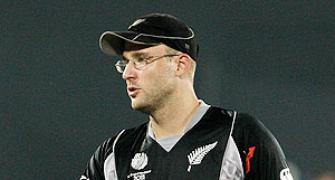 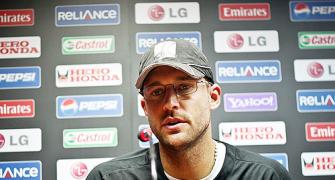 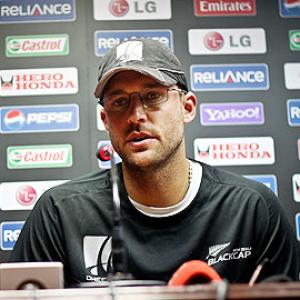 RCB aim to continue winning run when they take on KKR 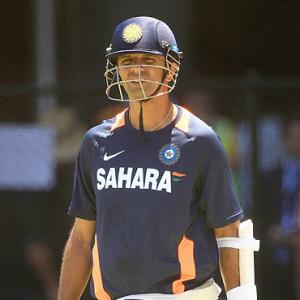 KKR look to come back strong against Royals