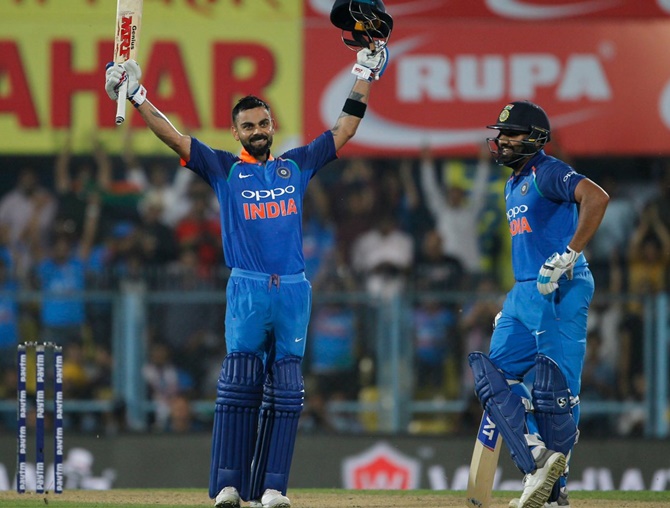 2 Number of captains to aggregate 2,000 runs in international cricket in consecutive years.

2 Number of players to have scored 6,000 runs in chases in one-day internationals.

Interestingly, Virat did so in only 116 innings as against 155 by Sachin.

4 Number of players to aggregate 2,000 runs in international cricket in THREE consecutive years.

5 Number of double hundred stands put on by the pair of Rohit Sharma and Virat Kohli -- the most by any pair in ODIs.

5 Number of ODI hundreds Virat has scored against the West Indies -- the most by an Indian.

He went ahead of Tendulkar's tally of four hundreds.

6 Number of times Rohit Sharma has hit six or more sixes in an ODI.

Only Shahid Afridi (13) and Chris Gayle (9) have done so more often.

Sanath Jayasuriya and A B de Villiers have also done so five times each.

6 Number of times a player has scored 140 or more runs in an ODI without being the highest score in the innings (Virat's 140 in this match was outscored by Rohit's 152*).

The three such instances have come from India.

6 Number of times Rohit Sharma has scored 150 or more in an ODI -- the most such scores by any batsman in this format.

Tendulkar and David Warner have five such scores.

8 Number of sixes hit by Rohit Sharma in the match -- the most by an Indian batsman against the West Indies.

9 Number of times India have successfully chased down a target of 300 or more since Virat Kohli made his debut in One-day internationals.

Virat has scored a hundred in seven of these nine chases!

36 Number of ODI hundreds made by Virat Kohli. The entire West Indies team playing in this match had a combined tally of 15 hundreds.

83 Runs conceded by Oshane Thomas -- the most by a West Indies debutant in ODIs.

106 Runs scored by Shimron Hetmyer -- the joint-most by a West Indies player on his maiden appearance against India.

Gordon Greenidge had made an identical score (unbeaten) at Birmingham in 1979.

194 Number of sixes Rohit Sharma has hit in the ODIs -- the third most by an Indian.

He surpassed Sourav Ganguly's tally of 190 sixes. Among Indians, only M S Dhoni (217) and Sachin Tendulkar (195) are ahead of him. 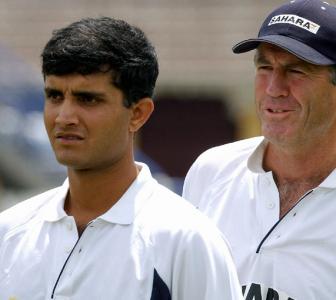